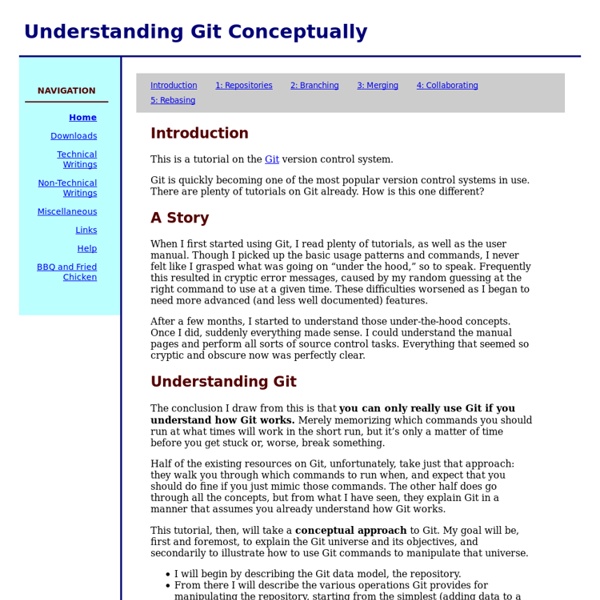 Introduction This is a tutorial on the Git version control system. Git is quickly becoming one of the most popular version control systems in use. A Story When I first started using Git, I read plenty of tutorials, as well as the user manual. After a few months, I started to understand those under-the-hood concepts. Understanding Git The conclusion I draw from this is that you can only really use Git if you understand how Git works. Half of the existing resources on Git, unfortunately, take just that approach: they walk you through which commands to run when, and expect that you should do fine if you just mimic those commands. This tutorial, then, will take a conceptual approach to Git. Go on to the next page: Repositories Related:  Git • Git

Git Cheat Sheet Even with a GUI application at hand there are times when you resort to the command line. We admit we can’t memorize all important Git commands – that’s why we created a nice cheat sheet for Git that we would like to share with you. On the front you can find all important commands. On the back you can find our Version Control Best Practices that help you get the most out of version control with Git. Available in English | Deutsch | Português | العربية and for download as ZIP including various designs. Download ZIP Size: 0.9 MB, inc. 3 alternative designs & multiple languages for free …and get free email updates.

5 Programming Challenges that make you Think Outside the Box Computer programming is a vast field with a variety of distinctive pleasures associated with it. Dexterity provides gratifying rewards when a useful object is built or made to work. The excitement of solving a previously intractable problem is undoubtedly exorbitant. Using clever algorithms and tight coding to tackle parsimony of the prudent problems surely adorns the craftsmanship of a programmer. Assorted programming challenges provide great opportunities to experience these pleasures as well as improve your algorithmic and coding skills. Put together here are some of the classic challenges in programming you may find quite compelling. 1. Based on the popular American television game show “Let’s Make a Deal” and named after the original host Monty Hall, The Monty Hall problem is actually a brain teaser and involves the probability puzzles. Suppose you’re on a game show, and you’re given the choice of three doors: Behind one door is a car; behind the others, goats. 2. 3. 4. 5.

ruby on rails - Pull is not possible because you have unmerged files, git stash doesn't work. Don't want to commit Git for Computer Scientists Abstract Quick introduction to git internals for people who are not scared by words like Directed Acyclic Graph. Storage In simplified form, git object storage is "just" a DAG of objects, with a handful of different types of objects. They are all stored compressed and identified by an SHA-1 hash (that, incidentally, isn't the SHA-1 of the contents of the file they represent, but of their representation in git). blob: The simplest object, just a bunch of bytes. tree: Directories are represented by tree object. When a node points to another node in the DAG, it depends on the other node: it cannot exist without it. commit: A commit refers to a tree that represents the state of the files at the time of the commit. refs: References, or heads or branches, are like post-it notes slapped on a node in the DAG. git commit adds a node to the DAG and moves the post-it note for current branch to this new node. The HEAD ref is special in that it actually points to another ref. History

The Phrygian Cap A few weeks ago I created this Git Cheat Sheet as a reference for commands I use at least once a month. I've found it useful and I'm sharing it so others find it useful too. There are also markdown and org-mode versions available.

Python for Adults - emacsen.net My girlfriend has always wanted to program. She even took C++ in high school and college, but never quite “Got it”, leaving her with a bad taste for computers and programming. Still, when I lent her my copy of The Little Schemer, she took to it pretty easily, so I knew she had the potential to be able to program, despite her past difficulties. So then the question becomes what language to teach her. While Scheme would be a nice choice in theory, despite more than three decades as a teaching language, it’s still not popular in the mainstream. While this wouldn’t be important in a classroom setting, adults have a different set of needs for programming. That’s why Python fits the bill so well. The key to Python’s success is three part. Python also stays firmly in the general purpose language camp. The second strength Python has are its libraries. The third, and perhaps most important strength of Python is its user community.

Git Reference git reset is probably the most confusing command written by humans, but it can be very useful once you get the hang of it. There are three specific invocations of it that are generally helpful. git reset HEAD unstage files from index and reset pointer to HEAD First, you can use it to unstage something that has been accidentally staged. Let's say that you have modified two files and want to record them into two different commits. Let's see what it looks like to unstage something. $ git status -s M README M hello.rb $ git add .$ git status -sM README M hello.rb $ git reset HEAD -- hello.rb Unstaged changes after reset: M hello.rb $ git status -sM README M hello.rb Now you can run a git commit which will just record the changes to the README file, not the now unstaged hello.rb. In case you're curious, what it's actually doing here is it is resetting the checksum of the entry for that file in the "index" to be what it was in the last commit. The third option is to go --hard.

training (The GitHub Training Team) Git User’s Manual (for version 1.5.3 or newer) This chapter covers internal details of the git implementation which probably only git developers need to understand. It is not always easy for new developers to find their way through Git’s source code. This section gives you a little guidance to show where to start. A good place to start is with the contents of the initial commit, with: The initial revision lays the foundation for almost everything git has today, but is small enough to read in one sitting. Note that terminology has changed since that revision. Also, we do not call it "cache" any more, but rather "index"; however, the file is still called cache.h. If you grasp the ideas in that initial commit, you should check out a more recent version and skim cache.h, object.h and commit.h. In the early days, Git (in the tradition of UNIX) was a bunch of programs which were extremely simple, and which you used in scripts, piping the output of one into another. Now is a good point to take a break to let this information sink in. Voila.

Dedoimedo with: A Beard and a Pipe ~ Linux Advocates by Guest Writer Dedoimedo Twenty years plus since being created, Linux remains a terrifying word in the global lexicon. Probably not as bad as it was for farmers watching cars take over the countryside in the early decades of the 20th century, but close. Because of this phenomenon, if you happen to burrow your face into the job-seeking networks, you will see the string Linux featuring tall and mighty. A Day in Life Now, let's expand on a day in life of Average Joe. Encompassing it all, there's one thing that everyone should sort of consider, and that's the ecosystem. I am absolutely certain that most people do not think about Linux when they apply for a job, but it is probably the first thing they should be doing. The maverick, slightly outcast, unpopular status of Linux is what makes it, perversely, the popular and most 'in' commodity in the industry right now. Linux is the rogue of the operating system gang. Linux as a Strategy: AKA The Minority Report It gets better. Let's Get Linuxy

git - GIT_DISCOVERY_ACROSS_FILESYSTEM problem when working with terminal and MacFusion Understanding the GitHub Flow · GitHub Guides GitHub Flow is a lightweight, branch-based workflow that supports teams and projects where deployments are made regularly. This guide explains how and why GitHub Flow works. Create a branch When you're working on a project, you're going to have a bunch of different features or ideas in progress at any given time – some of which are ready to go, and others which are not. When you create a branch in your project, you're creating an environment where you can try out new ideas. ProTip Branching is a core concept in Git, and the entire GitHub Flow is based upon it. Because of this, it's extremely important that your new branch is created off of master when working on a feature or a fix. Add commits Once your branch has been created, it's time to start making changes. Commits also create a transparent history of your work that others can follow to understand what you've done and why. Open a Pull Request Pull Requests initiate discussion about your commits. Discuss and review your code Deploy Merge