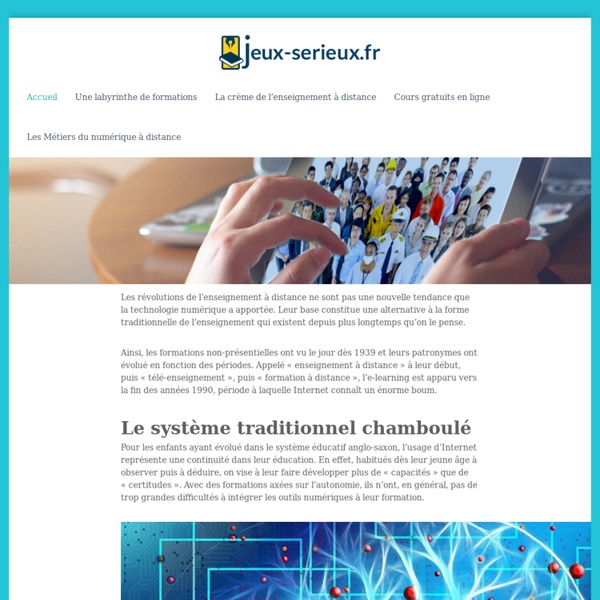 processing : black hole pong Robert Unwin summer project 2010 This game is a light-hearted remake of the old classic, except with a cosmic twist! The original game of Pong involved each player controlling a paddle which they would use to bounce a ball back to their opponent, in the hope they would miss. Each time the ball touched the opponent's side of the screen, the player would win a point. What's wrong with educational games (and how we can fix them) I’ve been designing, building, playing and promoting educational games (both digital and non-digital) all my working life. Starting out as a TEFL teacher, games were a huge component of my classes: from number games with little kids to complex role plays with adults. As I began to work more with digital media I started to design games for web and mobile: everything from location-based drawing games to a million-selling multi-level world for kids to learn English.

Guess My Race Guess My Race is a quiz game that was designed to get people thinking in new ways, allowing them to think more critically about the extremely complex issues of race, diversity, ethnicity, religion, nationality, class, and culture. The Guess My Race app takes the form of a “quiz” in which you will see stunning photographs of real people and you must try to guess how these people answered the question “What race are you?” After each guess, you will find out how the person really defines him or herself, along with a quote from that person regarding their identity or their experiences with race. Then you will be shown a thought provoking historical or cultural fact directly related to identity issues. Each quiz will display ten pictures, but you can play over and over with new pictures, quotes and facts each time. Guess My Race will show how something that is considered natural and biological is actually a result of complex historical and cultural constructions.

Serious Games in Education De Gloria, Bellotti, Berta and Lavagnino open with a coverage of the state of serious game within the field of education and training. Noting its flexibility and benefits for cost efficiency. They also note some concerns including; intended learning outcomes and game objectives (features) may conflict with each other‘suspension of disbelief’ may negatively impact the learning processSome socio-demographic group s my be excluded (usabilti, competition, access)risk of extrinsic motivation techniqueswith triple A title competition the term ‘game’ may not meet user expectations De Glorria et al. note the origin of the term “serious game” and and its use around training (eg army pilots etc). Then moves onto classification of serious games, citing a variety of models before presenting the following psycho-pedagogical dimensions (by Kickmeier-Rust, 2009), developed on the foundation of Kickmeier-Rust et al.’s 2007 taxonomy.

BEAT THE CENSOR - an illustration of different censoring attempts SCORE: 0000 | Users connected: 000 Why do some countries censor the internet? Frankly we do not know and you would need to ask the respective governments why they are doing it. Newsmaker: James Gee on Why the Power of Games to Teach Remains Unrealized Gee: “We need to begin to get teams of people — game designers, content people, assessment people, learning people — who can get on the same page.” For more than a decade, James Paul Gee has been writing about the potential power of games and game mechanics to change the way we learn, to create new “deep” learners. But in this newsmaker interview Gee says most of the possibilities of games remain unfulfilled as the American education system continues to focus on tests and fact retention. He worries that even as learning games become more prevalent, they are in danger of being changed by the schools they seek to sell to rather than changing the school itself.

Sweatshop Through a series of thirty challenging levels players must balance the unreasonable demands of Boss, the temperamental factory owner and Boy, a gentle, hard-working child labourer. Together, the team must work to make the factory a roaring success supplying clothes to their ever-demanding retail clients. The game presents a series of moral dilemmas to the player, who must juggle the needs of clients with the welfare of workers. Should you hire a fire officer to prevent the risk of workers dying horribly in an industrial blaze or pack them in to get the job done? Differences between Gamification and Games - Gamified UK The aim of this article is to present an umbrella term for the use of games and game like solutions in non game contexts. Many people lump this al under Gamification. I have chosen the term Game Thinking instead and hopefully by the end of this, you will understand why and also have a better understanding of the differences between games, gamification, serious games and more. Ever since I first started considering Game Thinking, I have been trying to come up with a way to break down all of the parts that make it up.