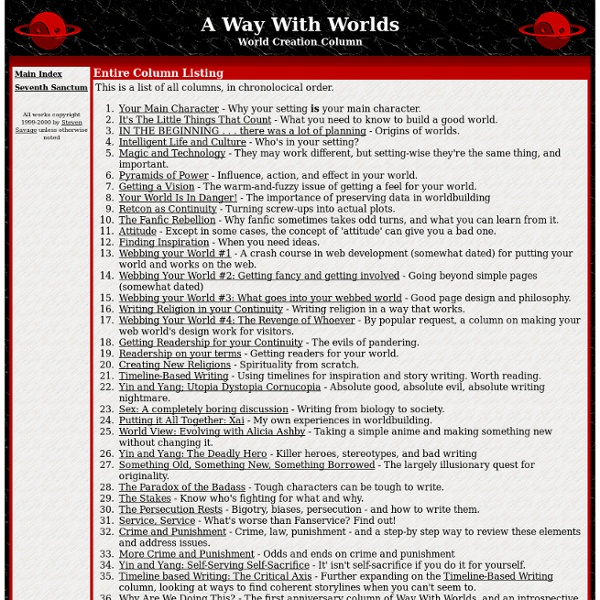 ProFantasy Software ~ map making for RPG, game, historical and h NetHack 3.4.3: Home Page World Builders Home Page Build Your Own World!!! The Language Construction Kit This set of webpages (what’s a set of webpages? a webchapter?) is intended for anyone who wants to create artificial languages— for a fantasy or an alien world, as a hobby, as an interlanguage. It presents linguistically sound methods for creating naturalistic languages— which can be reversed to create non-naturalistic languages. The above is a sample of an artificial language of my own, Verdurian. How about a suite of webpages? Before I could write this little inscription I had to: Decide on the sounds of the language Create the lexicon Create the grammar Design an alphabet Decide how the alphabet is modified for cursive handwriting Translate the desired text You may have two reactions to this: The order of the steps above is significant. Let’s get going! The rest of the kit is organized into three files: If you’d like to read the whole thing as an e-book, it’s available on Amazon for a paltry 99¢. Where do I go from here? There’s a list of web resources here.

Ghyll Round 2 Starting Soon | Gamegrene.com Eight months ago, Gamegrene launched an interactive worldbuilding and roleplaying exercise called Ghyll. Constrained to a small set of rules and the intent of building an integrated encyclopedia where Truth is further refined with each entry, Round 1 is nearly finished, and Round 2 is set to begin in the middle of May. If you're interested in playing, start reading. Eight months ago, some may recall an odd little announcement about the Gamegrene multiplayer game Ghyll. Based on the rules of "Lexicon: an RPG", it constrained players to roleplay themselves as cranky scholars, writing an encyclopedia about a fictional world that didn't yet exist. Round 1, of 26 turns each representing an alphabet letter, is nearly done. Today is the last day for entries starting with Y. If you're interested in joining Round 2 (currently scheduled to start May 14th, a month from now), the first thing to do is start reading. Leave comments here if you've questions, thoughts, or confusions.