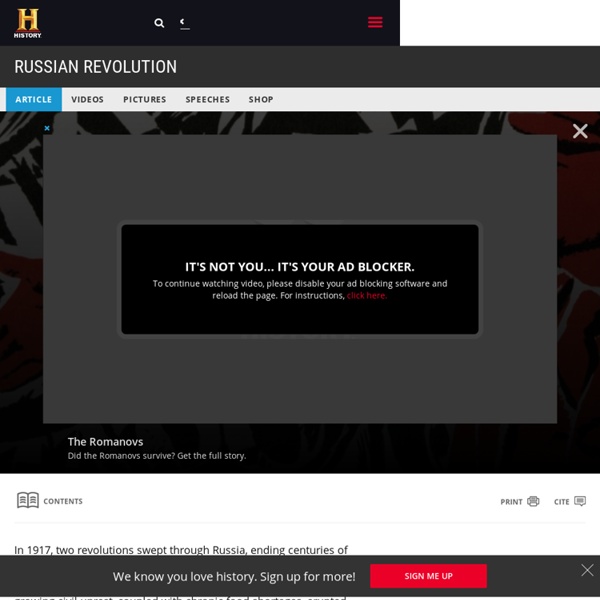 The February Revolution (known as such because of Russia’s use of the Julian calendar until February 1918) began on March 8, 1917 (or February 23 on the Julian calendar), when demonstrators clamoring for bread took to the streets in the Russian capital of Petrograd (now called St. Petersburg). Supported by huge crowds of striking industrial workers, the protesters clashed with police but refused to leave the streets. On March 10, the strike spread among all of Petrograd’s workers, and irate mobs destroyed police stations. Several factories elected deputies to the Petrograd Soviet, or council, of workers’ committees, following the model devised during the 1905 revolution. On March 11, the troops of the Petrograd army garrison were called out to quell the uprising. The imperial government was forced to resign, and the Duma formed a provisional government that peacefully vied with the Petrograd Soviet for control of the revolution.

N.S.A. Able to Foil Basic Safeguards of Privacy on Web The agency has circumvented or cracked much of the encryption, or digital scrambling, that guards global commerce and banking systems, protects sensitive data like trade secrets and medical records, and automatically secures the e-mails, Web searches, Internet chats and phone calls of Americans and others around the world, the documents show. Many users assume — or have been assured by Internet companies — that their data is safe from prying eyes, including those of the government, and the N.S.A. wants to keep it that way. The agency treats its recent successes in deciphering protected information as among its most closely guarded secrets, restricted to those cleared for a highly classified program code-named Bullrun, according to the documents, provided by Edward J. Snowden, the former N.S.A. contractor.

Defeat of Hitler: Attack on Russia In calling off Operation Sea Lion, Adolf Hitler, the Supreme Commander of the world's most powerful armed forces, had suffered his first major setback. Nazi Germany had stumbled in the skies over Britain but Hitler was not discouraged. In the past, he had repeatedly overcome setbacks of one sort or another through drastic action elsewhere to both triumph over the failure and to move toward his ultimate goal. Now it was time to do it again.All of Hitler's actions in Western Europe thus far, including the subjugation of France and the now-failed attack on Britain, were simply a prelude to achieving his principal goal as Führer, the acquisition of Lebensraum (Living Space) in the East. Tusi couple An animated model of a Tusi couple. Original description[edit] Tusi's diagram of the Tusi couple[1]

1917: The Russian Revolution 100 GREAT STORIES reported, investigated, written, produced, filmed, edited, photographed, anchored, and/or tweeted by columbia journalists We compiled this collection by culling the school’s archives, researching the recipients of a wide array of journalism prizes, consulting with colleagues and scouring some of the best journalism ever produced. In fall 2011, we enlisted our faculty and a group of distinguished judges to vote for their favorites on the first installment of 50 Great Stories. Then, in 2012, we invited alumni to nominate and vote on the selections they thought most worthy of inclusion. Sustainable Human This video was produced as a gift to humanity by Sustainable Human (sustainablehuman.me). Visit us to find out how you can support and create videos like How Whales Change Climate in collaboration with a global team of volunteers. Together, we can change the story of the world. Visit the official landing page for more information on this incredible story: sustainablehuman.me/how-whales­-change-climate "When we try to pick out anything by itself, we find it hitched to everything else in the Universe." - John Muir When whales were at their historic populations, before their numbers were reduced, it seems that whales might have been responsible for removing tens of millions of tonnes of carbon from the atmosphere every year.

Russian Revolution of 1917 Russian Revolution of 1917, Lenin, Vladimir Ilich: during the Russian Revolution, 1917© Photos.com/Thinkstocktwo revolutions, the first of which, in February (March, New Style), overthrew the imperial government and the second of which, in October (November), placed the Bolsheviks in power. Winter Palace: demonstrators at the Winter Palace, 1917Hulton Archive/Getty ImagesBy 1917 the bond between the tsar and most of the Russian people had been broken. Governmental corruption and inefficiency were rampant. The tsar’s reactionary policies, including the occasional dissolution of the Duma, or Russian parliament, the chief fruit of the 1905 revolution, had spread dissatisfaction even to moderate elements. The Russian Empire’s many ethnic minorities grew increasingly restive under Russian domination.