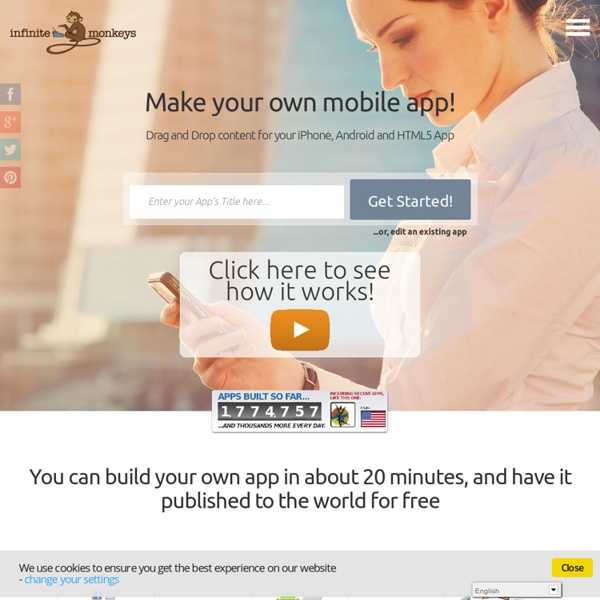 Do It Yourself: Create Your Own iOS or Android Apps - Buzztouch You don't need programming knowledge to build an iOS or Android app. Really. It might be the people lining up to get the new iPad that grab headlines, but those who want to develop and publish apps for the device are the ones who'll benefit most from its screen time. Whether it's on an iOS or Android device, mobile users now spend more time using apps than they do on the Web. Flurry Analytics found that mobile users devote an average of 94 minutes of the day to apps, while they give just 72 minutes to the Web. Apple's App Store just crossed the 25 billion mark in downloaded apps and, in December, Google announced that 10 billion Android apps have found their way onto mobile devices.

65 Open Source Apps That Replace Popular Education Software: Page 3 33. gnuplot Replaces Visual Math, Mathematica If you're comfortable working from the command line, you can use gnuplot to create 2D and 3D graphs of mathematical functions. Extensive help is available on the website, and there's even a book on Gnuplot that you can buy. Operating System: Windows, Linux, Unix, OS X, and others.

How to build an Android app One of the strengths of the Android platform compared to iOS, for example, is that it has an open source basis, which makes it easier to produce your own applications and distribute them without waiting for a lengthy approval process. You can set up your own Android app on your PC as long as you have the right software installed, and you can even take it for a test drive using an Android emulator so you can see what it will look like when it's run on a smartphone. There are two techniques that you can use to produce Android applications with a PC. The first uses the Android Software Development Kit (SDK). This lets you write raw code and helps you get it working in the Android environment.

20 Best Free Sites for Online Data Storage & Backup (Updated) Well there used to be so little options when it came to taking your data or file backups and keep them safely so that in any case if the actual current data got destroyed or erased or corrupted , we would have a safe and secure way of retrieving the data for our server or personal computer. For all the things like best backup software, online storage applications, top backup storage software or service etc. this blog would be quite the fit for the questions you have about the best services for online storage and backup And since the all powerful cloud technology is on the rise , this has become a whole new game Make an App without Coding using Andromo App Maker for Android If you can point and click, you can make an Android app. No kidding. Make your own app right now. Andromo makes it fast and easy to create Android apps, with absolutely no programming required. The great thing about it is that you can re-purpose the online content that you already have.

Big Stretch Reminder Program - Free RSI Software for Windows Big Stretch is a free simple reminder tool that prompts a user to take regular breaks and helps prevent the symptoms of RSI. Alternatively it can be a simple reminder program to tell you when it’s your coffee break! Example Reminder features Set the amount of time between breaks. 50 More Gorgeous Android Apps Unless you’ve been living under a rock for the last few years, you’re probably aware of the battle that has been raging between the iOS and Android platforms. Loyalists on both sides have been taking turns throwing punches at each other. For a good few years, the one punch Android fans were having a tough time deflecting was about the visual quality of apps on iOS. Make no mistake: to this day, iOS apps trump their Android counterparts in the aesthetics department.