How to confuse a moral compass 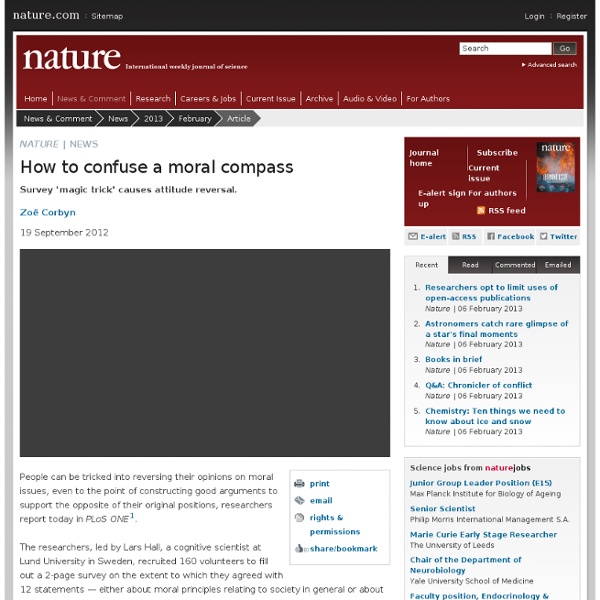 People can be tricked into reversing their opinions on moral issues, even to the point of constructing good arguments to support the opposite of their original positions, researchers report today in PLoS ONE1. The researchers, led by Lars Hall, a cognitive scientist at Lund University in Sweden, recruited 160 volunteers to fill out a 2-page survey on the extent to which they agreed with 12 statements — either about moral principles relating to society in general or about the morality of current issues in the news, from prostitution to the Israeli–Palestinian conflict. But the surveys also contained a ‘magic trick’. Each contained two sets of statements, one lightly glued on top of the other. Two statements in every hidden set had been reworded to mean the opposite of the original statements. Participants were then asked to read aloud three of the statements, including the two that had been altered, and discuss their responses.

Europeans did not inherit pale skins from Neanderthals - life - 26 September 2012 The people who built Stonehenge 5000 years ago probably had the same pallid complexion of many modern inhabitants of the UK. Now it seems that the humans occupying Britain and mainland Europe only lost the darker skins of their African ancestors perhaps just 6000 years earlier, long after Neanderthals had died out. The finding confirms that modern Europeans didn't gain their pale skin from Neanderthals – adding to evidence suggesting that European Homo sapiens and Neanderthals generally kept their relationships strictly platonic. There is a clear correlation between latitude and skin pigmentation: peoples that have spent an extended period of time at higher latitudes have adapted to those conditions by losing the skin pigmentation that is common at lower latitudes, says Sandra Beleza at the University of Porto in Portugal. Those wanderings took modern humans into Europe around 45,000 years ago – but exactly when the European skin adapted to local conditions had been unclear. Three genes

7 Ways To Speed Up Your Internet in Windows 7 Is your internet becoming slow in Windows 7, but you don’t know how to speed up the internet connection? No worries, here are some of the best ways to speed up your internet connection in Windows 7 and make it blazing fast again. Ads: When it comes to internet connections, there are some things you can do to speed up your download speed, website loading speed or improve your gaming latency: 1. By default, Windows 7 latency can be pretty high. You can try the following tricks to speed up your Windows 7 internet latency:Latency Registry Fix for Windows 7Improve Latency in WoW Tip: Some internet providers can improve your latency for a few bucks more per month. 2. Speedbit’s Video Accelerator for example allows you to build up multiple connections to a Youtube video and speed up the buffering process. Speed Up Youtube Buffering 3. SkyDownloader is one of the best torrent clients, because it will find popular torrents and help you to connect to the fastest torrents out there. 4. 5. 1. 6. 7.

Unbreakable crypto: Store a 30-character password in your brain’s subconscious memory A cross-disciplinary team of US neuroscientists and cryptographers have developed a password/passkey system that removes the weakest link in any security system: the human user. It’s ingenious: The system still requires that you enter a password, but at no point do you actually remember the password, meaning it can’t be written down and it can’t be obtained via coercion or torture. The system, devised by Hristo Bojinov of Stanford University and friends from Northwestern and SRI, relies on implicit learning, a process by which you absorb new information — but you’re completely unaware that you’ve actually learnt anything; a bit like learning to ride a bike. In short, the system teaches the password to a part of your brain that you cannot physically access — but it is still there in your subconscious, just waiting to be tapped. Before running, the game creates a random sequence of 30 letters chosen from S, D, F, J, K, and L, with no repeating characters.

The 10 Best Extensions For Chrome Tab Management Advertisement Tabs, tabs, tabs. If you’re a multi-tasker, you love tabs. Thankfully, the days of having 30 separate Internet Explorer windows open in the Taskbar are behind us. But that doesn’t mean you can’t improve tabbed browsing. If you’re an avid Chrome user who doesn’t want to switch to an alternative app, you need to turn to third-party extensions for the functionality you crave. But which one should you use? 1. It might have started life as a lightweight and super-fast browser, but these days, Chrome is a memory munching behemoth. It’s hardly surprising; it takes a lot of power to run lots of extensions and integrate the browser tightly with the Google ecosystem of apps. Therefore, if you’re a tab junkie (or working on an old, underpowered computer), you need The Great Suspender. Download: The Great Suspender 2. The beauty of Tabli lies not in its ability to manage tabs in your current browser window, but to manage tabs in all the windows you have open. Download: Tabli 3. 4. 5. 6. 7.

Oldest paint-making studio ever discovered - Technology & science - Science - LiveScience A group of Home sapiens came across a picturesque cave on the coast of South Africa around 100,000 years ago. They unloaded their gear and set to work, grinding iron-rich dirt and mixing it gently with heated bone in abalone shells to create a red, paint-like mixture. Then they dipped a thin bone into the mixture to transfer it somewhere before leaving the cave — and their toolkits — behind. Researchers now have uncovered those paint-making kits, sitting in the cave in a layer of dune sand, just where they had been left 100,000 years ago. "To me, it's an important indicator of how technologically advanced people were 100,000 years ago," Henshilwood said. Along with the toolkits, Henshilwood said, the archaeology team found pieces of ocher, or colored clay, etched with abstract designs. This cave, now known as Blombos Cave, has been under excavation since 1992. After three days of painstaking excavation, the archaeologists saw one of the shells was coated with a red substance.

Best Chrome Extensions On this page, you will find the best Chrome extensions for all your browsing needs. Using the right Chrome extensions can completely transform your online experience, and make your time on the Internet much more productive and interesting. We’ve made the effort to categorize the extensions and chose only those we believe to be the best ones and which will most likely be useful to you. A perfect tool for students/researchers and one of the best Chrome extensions for organization. Read selected content both online and offline. Xmarks syncs your data across multiple computers and browsers. The Evernote Web Clipper is the easiest way to save, mark up and share anything you see online. Helps you to collect, manage and cite the sources for your latest project. Bookmark and organise anything online that interests you into trees and share with others for a social bookmarking experience. With Autopager, the next page on a website is loaded automatically as you scroll. See a font that you like?

Baby Makes Daddy Lose Testosterone: Scientific American Podcast For men hunting for a partner, testosterone’s a good thing. It boosts competitive behavior, and increases men's attractiveness to women. But the hormone has its drawbacks. Men with more of it have more marital problems and divorces. One study even suggested that guys with high testosterone have less sympathy for crying infants. But there’s good news. The researchers sampled testosterone levels of over 600 21-year-olds in 2005, and again in 2009. Single guys with high testosterone had better luck finding mates by the study’s end, and were more likely to have become fathers. Which suggests that being a nurturing dad may have ancient evolutionary roots—and that men are biologically wired to shift from alpha-male to tender caregiver when bringing up baby. —Christopher Intagliata [The above text is a transcript of this podcast.]

Top 50 Important Tools – DIY Tips and Advice – Tools Everyone Should Own Man is "weak in himself, and of small stature," wrote 19th-century essayist Thomas Carlyle. Yet, with tools, "the granite mountain melts into light dust before him, seas are his smooth highway, winds and fire his un­wearying steeds." And this from a guy who never felt a 5800-rpm circular saw scream to life in his hand. While much has changed since Carlyle's day, one thing hasn't: We need tools to build, repair and maintain the mechanical world in which we live. With these 50 tools, you'll be ready for just about any project--whether it's melting mountains or swapping out the kitchen sink. 1. * Few tools combine brute force and finesse as elegantly as a sledgehammer. 2. * In theory, you use a center punch to start holes in metal. 3. * The putty knife is more than a single implement. 4. * DIY projects may come and go, but you won't get a second shot at good vision--protecting your eyes should be your first priority. 5. 6. 7. 8. 9. 10. 11. 12. 13. 14. 15. 16. 17. 18. 19. 20. 21. 22. 23.

Gut Bacteria Divide People Into 3 Types, Scientists Report Correction Appended In the early 1900s, scientists discovered that each person belonged to one of four blood types. Now they have discovered a new way to classify humanity: by bacteria. Each human being is host to thousands of different species of microbes. Yet a group of scientists now report just three distinct ecosystems in the guts of people they have studied. Blood type, meet bug type. “It’s an important advance,” said Rob Knight, a biologist at the University of Colorado, who was not involved in the research. The researchers, led by Peer Bork of the European Molecular Biology Laboratory in Heidelberg, Germany, found no link between what they called enterotypes and the ethnic background of the European, American and Japanese subjects they studied. Nor could they find a connection to sex, weight, health or age. Photo The microbes alter the gut so that only certain species can follow them. Dr. “Some things are pretty obvious already,” Dr. Dr. In the recent work, Dr. Still, Dr. Dr.