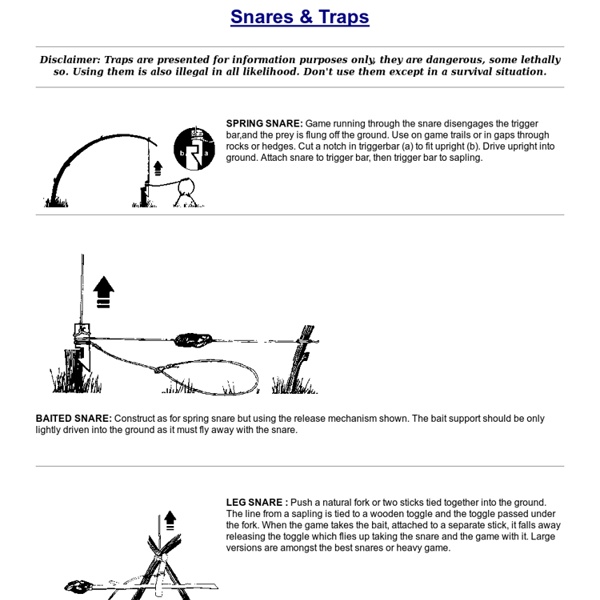 Disclaimer: Traps are presented for information purposes only, they are dangerous, some lethally so. Using them is also illegal in all likelihood. Don't use them except in a survival situation. SPRING SNARE: Game running through the snare disengages the trigger bar,and the prey is flung off the ground. Use on game trails or in gaps through rocks or hedges. Cut a notch in triggerbar (a) to fit upright (b). BAITED SNARE: Construct as for spring snare but using the release mechanism shown. LEG SNARE : Push a natural fork or two sticks tied together into the ground. PLATFORM TRAP: Site over a small depression on the game trail. FIGURE 4 DEADFALL : A simple and effective deadfall trap, can be made to any size. TRIPWIRE DEADFALL : A heavy log is suspended over a busy game trail, trips the wire and pulls a retaining bar from under two short pegs secured in a tree trunk. BAITED HOLE NOOSE : This trap is very useful for scavengers, drive 4 sharpened sticks into the pit, through the edges.

10 Off-The-Wall Survival Tricks And Tools Facts As we’ve covered in the past here on Listverse, there are approximately one billion ways you could die. Nuclear winter, the robopocalypse—heck, just a simple camping trip gone wrong could leave you trapped in the merciless grip of nature’s fury, with nothing but your own wits and the questionable advice of this list to get you out alive. But to quote the wise men who have walked this fair earth in ages past, questionable advice is technically better than no advice—so here are ten unusual survival tips that could end up saving your life. The specifics of wilderness survival change a lot depending on what part of the world you’re trapped in. So what if you don’t know how to fish, or don’t have any gear? Tampons are almost as useful for surviving in the wild as condoms—and as weird as that sounds, it’s not even a little bit sarcastic. If it doesn’t float, stuff some of the cotton into the bubble. But that’s not all you can do with a tampon. Condoms also burn.

Food Procurement - Traps & Snares For an unarmed survivor or evader, or when the sound of a rifle shot could be a problem, trapping or snaring wild game is a good alternative. Several well-placed traps have the potential to catch much more game than a man with a rifle is likely to shoot. To be effective with any type of trap or snare, you must-- Be familiar with the species of animal you intend to catch. There are no catchall traps you can set for all animals. Runs and trails. Position your traps and snares where there is proof that animals pass through. For an evader in a hostile environment, trap and snare concealment is important. You must remove or mask the human scent on and around the trap you set. Traps or snares placed on a trail or run should use channelization. Use of Bait Baiting a trap or snare increases your chances of catching an animal. If you set and bait a trap for one species but another species takes the bait without being caught, try to determine what the animal was. Trap and Snare Construction

Waterproof Fire Starter I have seen many examples of fire starters, but I wanted to try and make one that was made out of only primitive materials. I wanted to make sure that it was small and waterproof. Also, it could be used with any primitive coal producing method of fire making, like the hand drill or bow drill, as well as more modern methods, like steel and flint, Ferrocerium Rods, matches and lighters. Supplies: 1. Begin by placing the char cloth into the center of the jute tinder nest. Next begin wrapping the tinder with thin strips of birch bark. Carefully dip half of the wrapped bundle into the wax to seal the bark in place. When you are ready to use your fire starter (this was done on a rainy day, on cold wet pavement, in late October, in Northeast Wisconsin), simply cut it in half, pull out the tinder nest from the inside, expose the char cloth and you are ready to go. This particular fire starter ball was started with steel and flint and burned on this wet pavement for over 10 minuets.

Survival Hunting Tips To endure the extreme conditions of a survival situation, animal fats and proteins must be eaten regularly, and survival hunting is an essential skill. Such situations are a drain on a person’s energy. Potentially inclement weather forces your body to metabolize calories at an increased rate to stay warm, and performing the physical tasks needed to take care of your body uses a lot of energy. The concentrated calories from wild edible animals obtained through survival hunting are an efficient way to keep the internal fire burning. In the wilderness, the most practical and accessible wild animals are small game, fish, reptiles and amphibians and invertebrates. Hunt and Prepare With Care Small game and birds are important when considering what kinds of animals to pursue for survival hunting. All wild game should be cooked thoroughly to kill any microorganisms in the meat. One Fish, Two Fish Another option for meat is fish. Tasty, Nutritious Reptiles and Amphibians

Combat Strategies Combat Strategy & Tactics By Stefan Verstappen Most sorts of diversion in men, children and other animals, are in imitation of fighting. Jonathan Swift The first rule of survival and self-defense is to have a plan. The following ten strategies can be universally applied and are especially applicable to hand to hand combat. Narrow passes and mountain forests are the means by which a few can attack a large force. The Six Secret Teachings of the Tai Kung Time and Place The first strategy to employ in combat is to, when possible, choose the time and place of the combat. The First Attack You quietly assume the position from which to initiate the attack and then swiftly make the attack with no hesitation. To attack first, before the opponent has readied himself for battle, have several advantages. On the streets this is known as the `Sucker Punch' and is one of the most often used tactics in bar room and street fights. To Destroy Intercepting Jamming Injuring the Corners Miyamoto Musashi Sun Tze [1].

Identifying Animal Tracks Identifying animal tracks & sign, as well as interpreting and trailing, are primary skills of the wildlife tracker. Historically, animal tracking skills helped people find food, avoid dangerous predators, and read the stories on the landscape. Wildlife tracking skills continue to be valuable today and are being employed in wildlife research, conservation, and outdoor education. Identifying animal tracks and sign can open up an unseen world, a window into the lives of shy and elusive animals. Tracks, scat, feeding sign, beds, scent marking, trails and other types of animal sign point to which animals passed by, what they did, where they went, and much more. Seemingly barren ground becomes alive with a diversity of fascinating information. This section of the online library contains an expanding offering of animal tracking articles, as well as many pictures of animal tracks & sign. You can peruse the articles below and/or sign up to the Alderleaf eNewsletter to get updates on new articles.

FM 23-10 Chptr 8 Tracking/Countertracking When a sniper follows a trail, he builds a picture of the enemy in his mind by asking himself questions: How many persons am I following? What is their state of training? How are they equipped? Are they healthy? What is their state of morale? Do they know they are being followed? Section I Any indicator the sniper discovers can be defined by one of six tracking concepts: displacement, stains, weather, litter, camouflage, and immediate-use intelligence. Displacement takes place when anything is moved from its original position. a. b. c. A stain occurs when any substance from one organism or article is smeared or deposited on something else. a. The sniper can also determine the seriousness of the wound and how far the wounded person can move unassisted. b. c. Weather either aids or hinders the sniper. a. b. c. d. e. A poorly trained or poorly disciplined unit moving over terrain may leave a trail of litter. a. b. c. Dog/handler tracking teams are a threat to the sniper team. a. b. c. a.

Field Dressing Deer Instruction Guide A simple step-by-step guide to field dressing your deer. Whether you call it field dressing, gutting, skinning or cleaning a deer, this simple guide should be helpful. GENERAL INFORMATION Well-cared for deer and antelope make fine table fare for many people. It is important to properly handle deer and antelope immediately after the shot. How quickly the animal is field dressed and the meat property cooled determines the quality of the meat.

Dokkōdō The "Dokkōdō" [ (Japanese: 独行道?); "The Path of Aloneness", "The Way to Go Forth Alone", or "The Way of Walking Alone"] is a short work written by Miyamoto Musashi (宮本 武蔵) a week before he died in 1645. It consists of either nineteen or twenty-one precepts; precepts 4 and 20 are omitted from the former version. Precepts[edit] References[edit] How To Skin & Gut An Animal This post was done by a Forum member Alaska Rose, who is a wealth of knowledge of wilderness and homesteading skills. Learn more from her and others on our FORUM This picture shows the most common way to cut the hide for skinning a game animal. The dotted lines around the legs and neck are the usual cuts for removing the head and lower legs. If you do not wish to keep the skin, you may want to just cut any way you can to get it off the animal the quickest way possible. The reasons behind this could be simple, just wanting to get the job done and you are by yourself and it is getting dark and you just know the crackling brush is a large bear coming to check out the smell of blood. This picture shows the easiest way to gut a very large animal without being up to your armpits in the body cavity cutting blind, trying to get everything inside to the outside without cutting yourself or a gut. This is geared more toward moose, but works fine for elk or deer, also. Like this: Like Loading...

Gripping Tutorials on How to Draw Hands | Maca is Rambling Sharebar The human hand, for some of us, is one of the most challenging things to master drawing. It is important especially for those who are serious about pursuing a career in drawing. Apart from being the primary focus of a character’s actions, the hand may also serve as one of the key elements that could make the emotions and mood of a character apparent through hand gestures. As someone who has been drawing for the rest of his life, I had my fair share of drawings with the character’s hands somehow hidden from view just to hide the fact that I can’t draw them. Just click on each tutorial to go to the artist’s page and download the full size. Mini Hand Tutorial by nk-chan Clawed Hand Tutorial by Mytherea Drawing Hands by Paperwick Hand Tutorial 2 by Qinni -Hands Tutorial- by odduckoasis Hands Tutorial by JohnYume About maca Hello, my name is Karlo Macariola.