Reviews and News on Tech Products, Software and Downloads - PCWorld 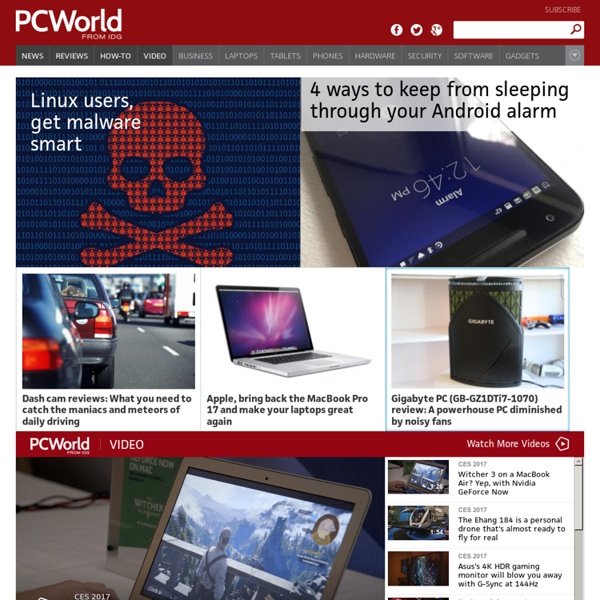 List of computer magazines This is a list of magazines marketed primarily for computer and technology enthusiasts or users. The majority of these magazines cover general computer topics or several non-specific subject areas, however a few are also specialized to a certain area of computing and are listed separately. General magazines[edit] These publications appeal to a broad audience and usually include content about computer hardware and software and technology news. These magazines could also be called technology magazines because of the large amount of content about non-computer consumer electronics, such as digital audio player and mobile phones. Bi-monthly[edit]

tech tomorrow&#039;s Channel (videos) Upload techoftomorrow.com Subscription preferences Loading... eMIT <div class="receipt bad editmode">Please enable JavaScript in your browser for the Blackboard application to function.</div> Welcome to eMIT, Manukau Institute of Technology's teaching and learning website. Free PDF to Flash Page Flip converter This is a Page to say that Codebox page flip is closed, in other way this domain have another owner and dont represents the “old domain” or company that used the domain codebox.es, the domain have new owners from a different company. But if you still want to use a similar service we can recomend you: Issuu.com A really good solution to createyour PDFS or magazines

Techland - Tech and Gaming News and Reviews - TIME.com Regulators are wary of facial recognition software Facebook rolled out a new photo-sharing app in the U.S. this week, but it won’t come out in Europe in the near future due to concerns over how it uses facial recognition technology. The app, called Moments, allows users to share photos with each other privately based around specific events and uses facial recognition software to detect which friends are in a given photo. The technology, which is used to offer photo tagging suggestions on Facebook proper, is automatically set to be used on all users in the U.S. However, in Europe, Facebook will be forced to make facial scanning and tagging an opt-in feature, Facebook head of policy Richard Allen told the Wall Street Journal.

MakerBot Industries Steps to Success Every now and then we’re reminded 3D printing is not science fiction, but a real technology used every day to make amazing things in homes, studios, schools, and businesses. At MakerBot we’re proud to be leading this Next Industrial Revolution with the MakerBot 3D Ecosystem, which makes desktop 3D printing and 3D scanning affordable and reliable for everyone, and includes a variety of products and services to help unleash your creativity. One of the newest members of our family is MakerBot Desktop, a complete, free 3D printing solution for discovering, managing, and sharing your 3D prints.

The Best Of: Windows Software Windows is bathed in a sea of free applications. Which ones can you trust and which ones are the best? Consult this list for ideas and discover apps you didn’t know existed. We’re continuously seeking out the best Windows software for all your needs. ▶ How to use the Raspberry Pi B+ computer for your next DIY project You don't need an electrical engineering degree to build a robot army. With the $35 Raspberry Pi B+, you can create robots and connected devices on the cheap, with little more than an Internet connection and a bunch of spare time. The Raspberry Pi is a computer about the size of a credit card. The darling of the do-it-yourself electronics crowd, the Pi was originally designed to teach kids computer and programming skills without the need for expensive computer labs. People have used Raspberry Pis for everything from robots to cheap home media centers.

100+ awesome free and open source applications - Software - Seopher.com Posted on Tuesday 27th of September 2011 at 13:05 in SoftwareIt has always amazed me quite how many incredible, varied and useful applications are available for free on the Internet. Be it free, open source, web-based or merely passive trials - the number of top quality items on offer is huge. The purpose of this list is to help people realise that the free and open source software communities are expansive and generous.

Logitech's new Bluetooth keyboard quickly switches between PC, tablet, and phone Switching between three different devices while working is a real problem, albeit one of the first-world variety. Logitech thinks it has the solution: A new keyboard that, with the turn of a dial, can connect to a computer, smartphone, and tablet simultaneously and quickly switch between them. The K480 keyboard works across the major platforms: Windows, OS X, Chrome OS, iOS, and Android. According to Logitech, it supports keyboard shortcuts for each of the desktop operating systems.

ALL-TIME 100 Movies - TIME You like us, you really like us. You also hate us. Anyway, you click on us, which is the surest way a website has of measuring interest in its content. Airbus Group - The future of e-aircraft In the 18th century, the British theologian John Wesley described the electricity that astonished his contemporaries as “the soul of the universe”. Three centuries later, this definition is even more accurate thanks to the new aircraft being developed by Airbus Group. The company is now setting its sights on achieving silent, CO2-free, all-electric flight for both unmanned and passenger aircraft over the next three decades. Our focus is to develop innovations that will help define what tomorrow’s aerospace industry will look like As part of this roadmap, Airbus Group is currently involved in a number of technological programmes whose breakthroughs could eventually also be applied to an all-electric helicopter and a 90-seat-passenger regional airliner with fully electric or hybrid propulsion. The final aim is to meet the European Commission’s Flightpath 2050 targets for aircraft, which include a 75% reduction in aircraft CO2 emissions from the year 2000 baseline.

Gandhi (film) Gandhi is a 1982 epic biographical film which dramatises the life of Mohandas Karamchand Gandhi, the leader of India's non-violent, non-cooperative independence movement against the United Kingdom's rule of the country during the 20th century. Gandhi was a collaboration of British and Indian production companies[3] and was written by John Briley and produced and directed by Richard Attenborough. It stars Ben Kingsley in the titular role.