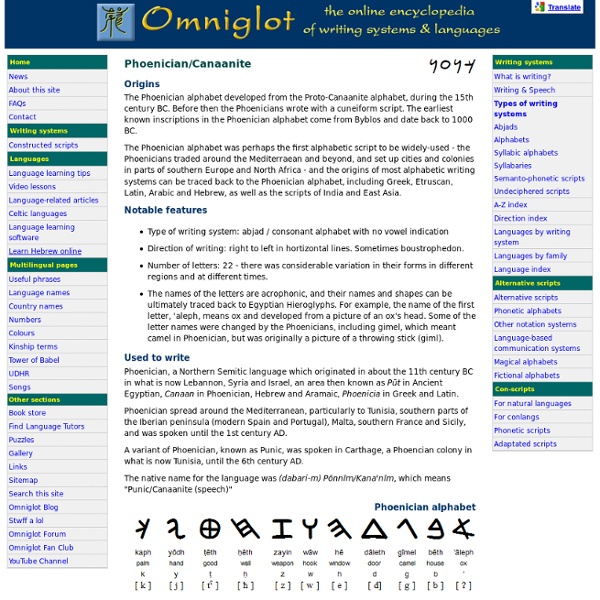 Sidon - Phoenician City State and Harbor Sidon The archaeological site of Sidon includes the ruins of what was an important city-state of the Iron Age civilization of Phoenicia also called Canaan, and the center port for trade between Assyria, Egypt, Cyprus and the Aegean Sea between the sixth and fifth centuries BC. Located on the Mediterranean coast of Lebanon, Sidon is today still a thriving city and port. Sidon was founded during the Early Bronze Age of the third millennium BC, when it was settled by coastal populations in the natural anchorage. By the beginning of the early Iron Age (between about 1200-1000 BC), Sidon had become an important international trade center. The first artificial harbor at Sidon was begun with the placement of artificial quays built of sandstone ridges and reinforced sea walls.

Theology and implications related to Phi Is there meaning hidden in Phi, the symbol for the Golden Number? The use of the Greek letter Phi Phi to represent the golden number 1.618 … is generally said to acknowledge Phidias, a 5th century B.C. sculptor and mathematician of ancient Greece, who studied phi and created sculptures for the Parthenon and Olympus. The message from scripture of all the major monotheistic religions is that God is One, Who created the universe from nothing, splitting nothingness into offsetting forces and elements. Today we understand the universe to consist of positive and negative atomic and subatomic particles and charges, matter and anti-matter, all coming from a singularity in what we term the “Big Bang.”

Phoenicians: Sailing Away The Phoenicians used cuneiform but later developed their own alphabet. This famous sequence of letters known to much of the world dates back to the 16th century B.C.E. A fairly small group of traders and merchants known as the Phoenicians created the foundation for the modern English alphabet and other alphabets. They organized a system of 22 consonants into what became the alphabet used not only by English speakers, but by speakers of many of the world's languages. FC13: Masters of the Sea: The Phoenicians (c.1200-500 BCE) It is easy for us today to take sea-borne trade and travel for granted. But what if no one had dared to venture across the sea? After all, humans do not take naturally to water, and it is conceivable that a natural fear would have kept us complete landlubbers.

Phoenicia Phoenicia was an ancient civilization composed of independent city-states which lay along the coast of the Mediterranean Sea stretching through what is now Syria, Lebannon and northern Israel. The Phoenicians were a great maritime people, known for their mighty ships adorned with horses’ heads in honor of their god of the sea, Yamm, the brother of Mot, the god of death. The island city of Tyre and the city of Sidon were the most powerful states in Phoenicia with Gebal/Byblos and Baalbek as the most important spiritual/religious centers. Phoenician city-states began to take form c. 3200 BCE and were firmly established by c. 2750 BCE. Phoenicia thrived as a maritime trader and manufacturing center from c.1500-332 BCE and was highly regarded for their skill in ship-building, glass-making, the production of dyes, and an impressive level of skill in the manufacture of luxury and common goods. The Purple People

Tribulation Network Section IV – Part 3 – Series: The Wonderful Numbers of Sacred Canon By Doug Krieger See this article in Page-Flip format The Latest Underwater Discoveries - Phoenician Wreck (Courtesy INA/Mark Polzer) Phoenician WreckCartagena, Spain Dubbed the "princes of the sea" in the Book of Ezekiel, the Phoenicians sailed from their ports in modern-day Lebanon all the way to the Iberian Peninsula in search of precious commodities. Trading a costly violet-blue dye, Tyrian purple, and exquisite glasswares, these master navigators and merchants filled their holds with silver and other valuables from about 1200 to 300 B.C. The Phoenicians (1500–300 B.C.) According to ancient classical authors, the Phoenicians were a people who occupied the coast of the Levant (eastern Mediterranean). Their major cities were Tyre, Sidon, Byblos, and Arwad. All were fiercely independent, rival cities and, unlike the neighboring inland states, the Phoenicians represented a confederation of maritime traders rather than a defined country. What the Phoenicians actually called themselves is unknown, though it may have been the ancient term Canaanite. The name Phoenician, used to describe these people in the first millennium B.C., is a Greek invention, from the word phoinix, possibly signifying the color purple-red and perhaps an allusion to their production of a highly prized purple dye.

Carthage - Phoenician and Roman Colony in Tunisia Carthage was a Phoenician colony located in what is now the country of Tunisia about 15 kilometers from the capital city of Tunis. Carthage (originally Qart Hadasht or "new city" in Punic, and spelled variously as Kart Hadasht, Qrthdst, and Carthago) was founded by Phoenicians on the coast of Tunisia in North Africa. The location on a point of land extending into the deepest part of the navigable bay of the Gulf of Tunis, was carefully chosen, at a nearly ideal harbor on the western Mediterranean Sea. Founding Monroe Techniques For Astral Projection Anon Note: After having studied many methods of Astral Projection, I have found that this is the easiest to do. Monroe teaches these techniques in a week, but they can be easily done in a day, with proper devotion.

Who Were the Phoenicians? Inspired by Egypt, obelisks punctuate a temple in Byblos, Lebanon, that was likely dedicated to the god Reshef about 1800 b.c By that time Egypt had already been trading with the cities of the eastern Mediterranean for at least a thousand years, importing luxuries such as wine, olive oil, and cedar timbers. In return the Phoenicians acquired Egyptian articles such as gold, scarabs, and stone vases, which have survived as votive articles buried at temples. Egyptian papyrus, on which the Phoenicians kept their records, crumbled to dust long ago. "I am a Phoenician," says the young man, giving the name of a people who vanished from history 2,000 years ago. "At least I feel like I'm one of them.

Phoenicians The Phoenicians were the direct descendents of the Canaanites of the south Syrian and Lebanese coast who, at the end of the second millennium BC, became isolated by population and political changes in the regions surrounding them. The name derives from the Greek, Phoinikes, referring to the purple coloured dye which the Phoenicians extracted from the murex shell, and with which they produced highly prized textiles. The major Phoenician cities were Tyre, Sidon, Byblos and Arwad. These cities represented a confederation of fiercely independent maritime traders. By the late eighth century BC, the Phoenicians had founded trading posts and colonies around the entire Mediterranean, the greatest of which was Carthage on the north coast of Africa (present day Tunisia). Explorers and traders from Carthage even ventured beyond the Straits of Gibraltar as far as Britain in search of tin.

THE PHOENICIANS Mediterranean trade: from the 11th century BC The Phoenicians inhabit the region of modern Lebanon and Syria from about 3000 BC (see Palestine and Phoenicia). They become the greatest traders and the best sailors and navigators of the pre-classical world. They are also the first people to establish a large colonial network based on seafaring. In all these skills they build on the example of their maritime predecessors, the Minoans of Crete.