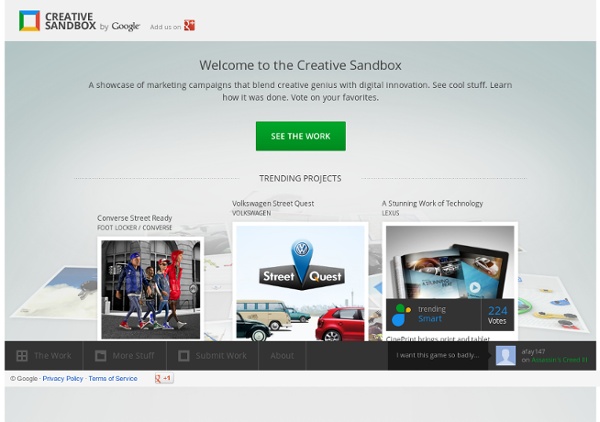 Car companies get their social media report card It doesn’t take a genius to figure out that social media can help companies connect with customers and move more merchandise, and that includes cars. The automotive industry has established a pretty significant online presence to create a digital version of brand loyalty. But is that really happening? Unmetric, a New York-based social media analysis company, just released a report rating car companies’ social media prowess. Analysts looked at data from companies’ Facebook, Twitter, Youtube, and Pinterest pages from October 1 to December 31, 2012, and assigned each brand a score.  Digital Campaigns, Online Marketing, Social & More. Forget the Film, Watch the Titles - Rango title sequence HENRY HOBSON ABOUT THE END CREDITS FOR RANGOPeople appreciate the energy and effort that was put into a handmade piece of work,and it starts to pay off...Amazingly, the end credit sequence for Rango was done in just a few weeks, yet it's a very accomplished and unique project that is founded on 'old school' analogue handiwork, such as intricate illustrations, woodcut art, and handdrawn typography, with a bit of Hendrix thrown in for good measure. Prologue's creative director Henry Hobson reconstructs the process and shares the beautiful concept art that he and his team created. Hobson talks to us via Skype about the making of Rango, from the relative quietness of Kyle Cooper's windowless office on the ground floor of Prologue, temporarily removed from the hustle and the bustle of the studio space on the second floor, where the designers are working.