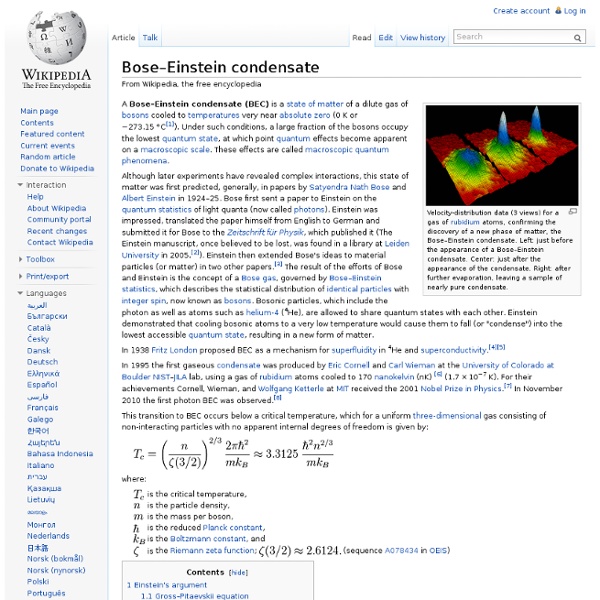 A Bose–Einstein condensate (BEC) is a state of matter of a dilute gas of bosons cooled to temperatures very close to absolute zero (that is, very near 0 K or −273.15 °C[1]). Under such conditions, a large fraction of the bosons occupy the lowest quantum state, at which point quantum effects become apparent on a macroscopic scale. These effects are called macroscopic quantum phenomena. Although later experiments have revealed complex interactions, this state of matter was first predicted, generally, in 1924–25 by Satyendra Nath Bose and Albert Einstein. History[edit] Velocity-distribution data (3 views) for a gas of rubidium atoms, confirming the discovery of a new phase of matter, the Bose–Einstein condensate. In 1938 Fritz London proposed BEC as a mechanism for superfluidity in 4He and superconductivity.[4][5] Concept[edit] where: Einstein's non-interacting model[edit] Consider a collection of N noninteracting particles, which can each be in one of two quantum states, and . or independently. . Related:  11doublett

Saturn Lightning Superbolts Revealed in New Photos NASA's Cassini spacecraft has revealed new photographs of powerful lightning flashing on Saturn after steadily watching a particularly stormy part of the ringed planet, according to a new study. Lightning, a common phenomenon on Earth, has been an elusive target on Saturn, at times only indirectly identified by previous studies. The new photos show a series of bright flashes against a cloudy backdrop. "We can learn the brightness and total power from the images," the lead researcher Ulyana Dyudina told SPACE.com. "The brightest lightning on Earth, called superbolts ? In the past, lightning images have been difficult to obtain because the planet's nights are typically very bright due the highly reflective nature of Saturn's rings. Yet, scientists who had been monitoring a section of the planet at latitude 35 degrees south ? ? The Cassini spacecraft was able to obtain the new images of lightning on Saturn in the period around August 2009, during the planet's equinox. Gas giant lightning

Physics Simulation Game | Powder Game [POWDER] : Standard powder.[WATER] : Water splash.[FIRE] : Fire spark.[SEED] : Cast seeds to grow trees.[G-POWDER] : Gunpowder. Explosive, keep fire away! [WIND] : Send wind toward the arrow direction. [BLOCK] : It blocks wind or dots. [UPLOAD] : Upload. * See below. - Uploading and Downloading - By selecting the [UPLOAD] button you'll save and uploadyour artwork on our server and you can share them. If you like the downloaded data, rate it.Voting helps to keep the quality of the work high. [Uploading has the following limitation]User registration is required.Upload only 1 time in 2 day.Only the author can upload his or her downloaded data.Up to 50 data can be uploaded within 12 hours. [Downloading has no limitation] [Voting has the following limitation]You can't vote for your own work.You can vote only 1 time for each work.You can't vote for works older than 3 months. After 12 hours, if the artwork receives more deletion requeststhan voting, the artwork will be automatically deleted.

g-factor (physics) For the acceleration-related quantity in mechanics, see g-force. A g-factor (also called g value or dimensionless magnetic moment) is a dimensionless quantity which characterizes the magnetic moment and gyromagnetic ratio of a particle or nucleus. It is essentially a proportionality constant that relates the observed magnetic moment μ of a particle to the appropriate angular momentum quantum number and the appropriate fundamental quantum unit of magnetism, usually the Bohr magneton or nuclear magneton. The most famous of these is the electron spin g-factor (more often called simply the electron g-factor), ge, defined by The z-component of the magnetic moment then becomes The value gS is roughly equal to 2.002319, and is known to extraordinary precision.[1][2] The reason it is not precisely two is explained by quantum electrodynamics calculation of the anomalous magnetic dipole moment.[3] Secondly, the electron orbital g-factor, gL, is defined by which, since gL = 1, is just μBml

Solid Single crystalline form of solid Insulin. The branch of physics that deals with solids is called solid-state physics, and is the main branch of condensed matter physics (which also includes liquids). Materials science is primarily concerned with the physical and chemical properties of solids. Microscopic description[edit] Model of closely packed atoms within a crystalline solid. The atoms, molecules or ions which make up solids may be arranged in an orderly repeating pattern, or irregularly. Schematic representation of a random-network glassy form (left) and ordered crystalline lattice (right) of identical chemical composition. In other materials, there is no long-range order in the position of the atoms. Whether a solid is crystalline or amorphous depends on the material involved, and the conditions in which it was formed. Classes of solids[edit] The forces between the atoms in a solid can take a variety of forms. [edit] Minerals[edit] A collection of various minerals. Ceramics[edit]

The Extrasolar Planets Encyclopaedia Planetary Transits Page Transit of Mercury on 1973 Nov 10. The transit or passage of a planet across the disk of the Sun may be thought of as a special kind of eclipse. As seen from Earth, only transits of the inner planets Mercury and Venus are possible. Planetary transits are far more rare than eclipses of the Sun by the Moon. On the average, there are 13 transits of Mercury each century. At the present time, all transits of Mercury fall within several days of May 08 and November 10. To determine whether a transit of Mercury is visible from a specific geographic location, it is simply a matter of calculating the Sun's altitude and azimuth during each phase of the transit using information tabulated in the Seven Century Catalog of Mercury Transit. In 1716, Edmond Halley published a paper describing exactly how transits could be used to measure the Sun's distance, thereby establishing the absolute scale of the solar system from Kepler's third law. Maor, Eli.

Higgs mechanism In particle physics, the Higgs mechanism is essential to explain the generation mechanism of the property "mass" for gauge bosons. In the Standard Model, the three weak bosons gain mass through the Higgs mechanism by interacting with the Higgs field that permeates all space. Normally bosons are massless, but the W+, W-, and Z bosons have values around 80 GeV/c2. In gauge theory, the Higgs field induces a spontaneous symmetry breaking, where instead of the usual transverse Nambu–Goldstone boson, the longitudinal Higgs boson appears. The simplest implementation of the mechanism adds an extra Higgs field to the gauge theory. In the Standard Model, the phrase "Higgs mechanism" refers specifically to the generation of masses for the W±, and Z weak gauge bosons through electroweak symmetry breaking.[1] The Large Hadron Collider at CERN announced results consistent with the Higgs particle on July 4, 2012 but stressed that further testing is needed to confirm the Standard Model. Background[edit]

Mass Transits: Kepler Mission Releases Data on Hundreds of Possi The Kepler spacecraft, launched in 2009 to scour distant stellar systems for Earth-like planets, has yet to attain that lofty goal, but it is now returning a flood of data about all manner of planets outside the solar system. On June 15, the Kepler team released information on possible planets identified in the first month or so of the spacecraft's three-plus-year mission—a massive set of more than 300 candidates that promises to significantly augment the known catalogue of extrasolar planets. The data were published online at the preprint repository arXiv.org and will be submitted to The Astrophysical Journal. On top of that bountiful, publicly released haul, the Kepler team is holding onto a list of 400 of the most intriguing potential host stars for further observation. With these two sets of objects, Kepler is poised to rewrite the catalogue of known exoplanets, which currently contains about 450 objects, including five confirmed exoplanets that the Kepler team announced in January.

What Is a Black Hole? An artist's drawing a black hole named Cygnus X-1. It formed when a large star caved in. This black hole pulls matter from blue star beside it. A black hole is a place in space where gravity pulls so much that even light can not get out. The gravity is so strong because matter has been squeezed into a tiny space. This can happen when a star is dying. Because no light can get out, people can't see black holes. How Big Are Black Holes? Another kind of black hole is called "stellar." An artist's drawing shows the current view of the Milky Way galaxy. The largest black holes are called "supermassive." How Do Black Holes Form? Stellar black holes are made when the center of a very big star falls in upon itself, or collapses. Scientists think supermassive black holes were made at the same time as the galaxy they are in. This image of the center of the Milky Way galaxy was taken by the Chandra X-ray Observatory. Image Credit: NASA/CXC/MIT/F.K. Could a Black Hole Destroy Earth? Image Credit:

Superfluid Superfluidity is a state of matter in which the matter behaves like a fluid with zero viscosity; where it appears to exhibit the ability to self-propel and travel in a way that defies the forces of gravity and surface tension. While this characteristic was originally discovered in liquid helium, it is also found in astrophysics, high-energy physics, and theories of quantum gravity. The phenomenon is related to the Bose–Einstein condensation, but it is not identical: not all Bose-Einstein condensates can be regarded as superfluids, and not all superfluids are Bose–Einstein condensates. Fig. 1. Fig. 2. Superfluidity of liquid helium[edit] Ultracold atomic gases[edit] Superfluid in astrophysics[edit] Superfluidity in high-energy physics and quantum gravity[edit] Superfluid vacuum theory is an approach in theoretical physics and quantum mechanics where the physical vacuum is viewed as superfluid. See also[edit] References[edit] Jump up ^ "MIT physicists create new form of matter".

Did a 'sleeper' field awake to expand the universe? - space - 11 IT'S the ultimate sleeper agent. An energy field lurking inactive since the big bang might now be causing the expansion of the universe to accelerate. In the late 1990s, observations of supernovae revealed that the universe has started expanding faster and faster over the past few billion years. Einstein's equations of general relativity provide a mechanism for this phenomenon, in the form of the cosmological constant, also known as the inherent "dark energy" of space-time. To overcome this daunting discrepancy, physicists have resorted to other explanations for the recent cosmic acceleration.