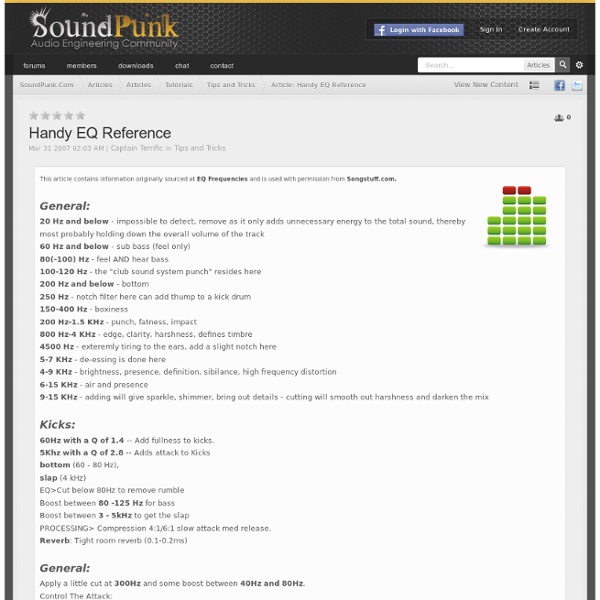 EQ Drums One of the things I love most about recording music is that there are no rules. One guy decides to use a cardboard box as his kick drum sound…and it sounds awesome. Another guy decides to sample in the sound of a screaming cat and blend it with the cymbals. (Okay, I’ve never seen that, but I bet it’s awesome.) You’re free to do whatever you want. Maybe that’s why so many people record music as a hobby. But there is one “rule” I almost always follow when mixing drums…and it almost always works. It’s really simple. I’ve heard it over and over again from mix engineers. It’s hard to explain. This is all without boosting the lows or the highs. You’ve got a set budget for the month. You’ve got a set number of frequencies to work with. You decide you want to spend an extra $200 on a piece of gear. You decide you need more low end in your kick drum. You take $200 out of ANOTHER part of the budget to pay for the gear. You cut 400 Hz to bring out the low end down at 80 Hz. What do you think?

Top 10 Reverb Tips and Tricks | EMusicTips With reverb, you can make or break a space Imagine listening to a recording and half a minute into a song you notice something wrong. You can’t quite put your finger on it; you just can’t feel the instruments, you feel attacked by the singer’s in-your-face voice and everything is just too…..dry. It’s like listening to music in a vacuum. Although listening to a reverb-free record is nearly impossible, (unless it was recorded entirely in an anechoic chamber), you can still have a really dry record if you don’t put any reverb on anything. Reverb can be perceived as a glue that holds everything together, yet retains enough space to maintain a perceived distance between each element. Different modes of reverb There are quite a few different types of reverb. Room reverb – These types simulate the sound of having recorded something in a room. So now you know a little bit about the reverb modes you most commonly work with. I’ve decided to do an example of tip #7. Leave a Reply

How Can I Set Up a Home Recording Studio on the Cheap? also, keep in mind that not everyone needs an audio interface. if you are only recording one track at a time or are recording more than one track but are fine with mixing it as you record you can use a much cheaper and oodles simpler analog mixing board/mixer. i struggled for over a year with a USB audio interface box i bought for home recording and it was ALWAYS a hassle - either really high latency, dropped sections, or it would take 15-20 minutes of fiddling with system prefs and settings in software to get it to work right. i finally went to my local music store and picked up a behringer analog mixer for $49 which has 8-Inputs (2 mic, 2 stereo, 1 stereo tape/CD), builtin EQ, effects send/receive, and the mic jacks have phantom power and the line inputs work great for electric instruments, a headphone out and I use an RCA-to-mini-1/8th-stereo plug to connect directly into the mic jack on my mac mini. It's simple, always works, and has real knobs and buttons.

WaterFall Records Learning to Record Lesson Two Lesson 1 You're here: Lesson 2 Log In: You must be a 'Member" to view Lessons 3 thur 9 Using a Compressor? Hello all, Ken here. If you are coming here from Recording Tips 7: show me the Magic Frequencies! Using one is really easy; the trick to it is to "listen to your music" and feel the flow of the mix. To set the compressor (assuming you have a constant meter in the song like the snare Mute out all the other tracks so you can work on the track. You want the compressor to breath in time with the song. Look at a compressor as an instrument in your sound. I hope this helps all of you in your mixing and recording. Here are some Magic Frequencies Tip: Set your frequencies up as presets. Good Luck! Web Design by Michael R.

EQ and the Limits of Audio by TweakHeadz Lab EveryPerson's Guide to The Limits of Audio Newbie Class by Tweak The Cambridge EQ for the UAD collection. In these wonderful days of audio plugins and supercharged processors,it is tempting to ignore something as simple as EQ, short for "equalization". "But Wait!" The Tweak glares at Newb as he puts on his latex gloves, snapping them loudly. "Class, should I do it?" "No Tweak you might kill him!" Tweak drops the hammer, sends Newb to his seat and resumes his tweakly demeanor. Basic EQ Theory To understand EQ is to understand limits. Like it or not, this is all you have to work with as you put your song together. As you see there is low frequency energy extending way below what we can hear. With Waves Linear phase Bass EQ we'll apply a rather steep resonant rolloff where the bass will peak where I want it around 70 Hz and then get out of the way quick. As you see the result is dramatically conveyed in the screen. There is only one problem. Mr. The Theory of Masking "I said, get OUT!" 1. 2. 3.

Community • View topic - Miking drums with 2 or 3 mics - examples inside... OK, I had a bit of spare time this weekend so I had a go at some 2- and 3-mic drum miking techniques. Samples are in .wav format and are completely raw, IE there is no mixing, EQ'ing, compression or anything except some panning (in the stereo ones, more on that later), and the levels are "straight off the preamp" tracking volumes, so are well below commercial levels. You'll have to crank them up, is what I'm loosely trying to say. Forgive the cheesy voiceovers and fairly feeble drumming. I was hot & tired, OK! DAW is Cubase, interface is an M-Audio Delta 1010lt. Of course, this is entirely subjective and bears no resemblance to your drummer, kit, mics, room, preamp, monitoring, placement choices etc etc, but I happen to think some of these sound pretty darn good, despite the room, so I thought it'd be nice to have some examples up. Example 2: Spaced PairSame 2 mics placed as a spaced pair behind the drummer pointing at the kit. That's it.

10 hallmarks of amateur recordings - Hometracked We’ve all experienced it: 3 seconds into a track you’ve never heard, you know instinctively that it was recorded and mixed in someone’s bedroom. Amateur recordings often sound “amateur.” But what differentiates these hometracked opuses from professional recordings? It’s not just fidelity or sonic quality: Many competent engineers produce lo-fi or distorted mixes on purpose, when it suits the song. Rather, amateur recordings tend to share some key traits, telltale signs that the mixing and recording are the work of a novice. You can learn to recognize and address these traits in your own recordings, and produce more polished, professional mixes: Too much bass: Nothing says amateur mix like a boomy, overpowering bottom-end. See Also: 5 Ways To Improve Your Recordings Today, Record Better Vocals

Studio Techniques To Get Great Sounding Vocals, Part 2: In The Control Room (See part 1 of this series.) During a session, I remember when an artist was on mic, out in the studio ready to start vocal overdubs, and the producer asked: “how do we look in here from out there?” Interesting, because he knew the appearance of the control room to the artist might affect the vocal performance. The control room (from the studio) does look like an aquarium with the huge window and the silent action of the animals encased within it. Reactions to performances reflected in facial expressions and body language are everything to singers and musicians isolated out in the studio. The concern is that the working in the studio does not feel like being in a Petri dish under the microscopic scrutiny of the control room. A great vocal sound starts with a good singer who has the artistic goal to perform the best vocal possible. For the first hour of a new vocal session, everyone in the control room is on a kind of “audition” until the artist feels comfortable and performs well.

untitled Producer and songwriter Fraser T Smith has made the unlikely journey from prog rock to grime. With Tinchy Stryder, his broad experience has paid off in the shape of three massive hit singles. Paul Tingen Fraser T Smith in his London studio. With American artists still dominating the hip‑hop/R&B genre, it's gratifying to see artists from different nationalities beating them at their own game. East Londoner Tinchy Stryder is one case in point. A central role in the making of the album was played by Fraser T Smith, who co‑wrote, arranged, played, mixed and produced many of the songs, including the three above‑mentioned hits. The now 38‑year‑old Fraser T Smith recalls how he took the long and winding road from old‑hippy prog rock to trendy urban youth music. Philosophy Of Everything Smith's MyAudioTonic Studio is based around Pro Tools, but with a 32‑channel Chandler summing mixer and a healthy selection of outboard. "But my setup here at the moment really works for me. 'Number One' The End