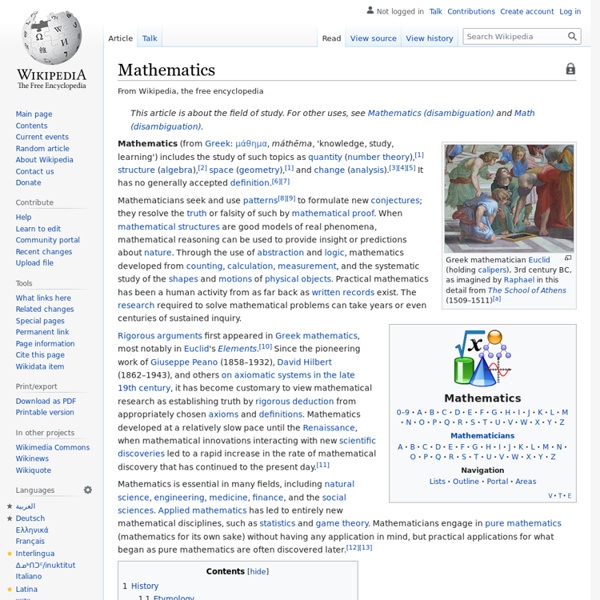 Field of study Mathematics (from Greek: μάθημα, máthēma, 'knowledge, study, learning') includes the study of such topics as quantity (number theory),[1] structure (algebra),[2] space (geometry),[1] and change (analysis).[3][4][5] It has no generally accepted definition.[6][7] Rigorous arguments first appeared in Greek mathematics, most notably in Euclid's Elements.[10] Since the pioneering work of Giuseppe Peano (1858–1932), David Hilbert (1862–1943), and others on axiomatic systems in the late 19th century, it has become customary to view mathematical research as establishing truth by rigorous deduction from appropriately chosen axioms and definitions. Mathematics developed at a relatively slow pace until the Renaissance, when mathematical innovations interacting with new scientific discoveries led to a rapid increase in the rate of mathematical discovery that has continued to the present day. History The Babylonian mathematical tablet Plimpton 322, dated to 1800 BC. Etymology ). from . . Related:  The problems with philosophy

Physics Various examples of physical phenomena Physics is one of the oldest academic disciplines, perhaps the oldest through its inclusion of astronomy.[8] Over the last two millennia, physics was a part of natural philosophy along with chemistry, certain branches of mathematics, and biology, but during the Scientific Revolution in the 17th century, the natural sciences emerged as unique research programs in their own right.[b] Physics intersects with many interdisciplinary areas of research, such as biophysics and quantum chemistry, and the boundaries of physics are not rigidly defined. New ideas in physics often explain the fundamental mechanisms of other sciences[6] while opening new avenues of research in areas such as mathematics and philosophy. Physics also makes significant contributions through advances in new technologies that arise from theoretical breakthroughs. History Ancient astronomy Astronomy is the oldest of the natural sciences. Natural philosophy Classical physics Modern physics

Philosophy Study of general and fundamental questions Philosophy (from Greek: φιλοσοφία, philosophia, 'love of wisdom')[1][2] is the systematized study of general and fundamental questions, such as those about existence, reason, knowledge, values, mind, and language.[3][4][5] Such questions are often posed as problems[6][7] to be studied or resolved. Some sources claim the term was coined by Pythagoras (c. 570 – c. 495 BCE),[8][9] although this theory is disputed by some.[10][11][12] Philosophical methods include questioning, critical discussion, rational argument, and systematic presentation.[13][14][i] Historically, philosophy encompassed all bodies of knowledge and a practitioner was known as a philosopher.[15] From the time of Ancient Greek philosopher Aristotle to the 19th century, "natural philosophy" encompassed astronomy, medicine, and physics. For example, Newton's 1687 Mathematical Principles of Natural Philosophy later became classified as a book of physics. Definitions Western philosophy

Wolfram|Alpha Logic Logic (from the Ancient Greek: λογική, logike)[1] is the branch of philosophy concerned with the use and study of valid reasoning.[2][3] The study of logic also features prominently in mathematics and computer science. Logic is often divided into three parts: inductive reasoning, abductive reasoning, and deductive reasoning. The study of logic[edit] The concept of logical form is central to logic, it being held that the validity of an argument is determined by its logical form, not by its content. Informal logic is the study of natural language arguments. Logical form[edit] Main article: Logical form Logic is generally considered formal when it analyzes and represents the form of any valid argument type. This is called showing the logical form of the argument. Second, certain parts of the sentence must be replaced with schematic letters. That the concept of form is fundamental to logic was already recognized in ancient times. Deductive and inductive reasoning, and abductive inference[edit]

Philosophy of logic Following the developments in formal logic with symbolic logic in the late nineteenth century and mathematical logic in the twentieth, topics traditionally treated by logic not being part of formal logic have tended to be termed either philosophy of logic or philosophical logic if no longer simply logic. Compared to the history of logic the demarcation between philosophy of logic and philosophical logic is of recent coinage and not always entirely clear. Characterisations include This article outlines issues in philosophy of logic or provides links to relevant articles or both. Introduction[edit] This article makes use of the following terms and concepts: Truth[edit] Aristotle said To say that that which is, is not or that which is not is, is a falsehood; and to say that which is, is and that which is not is not, is true[4] This apparent truism has not proved unproblematic. Truthbearers[edit] Logic uses such terms as true, false, inconsistent, valid, and self-contradictory. See: See also [1] See

Philosophy of mathematics The terms philosophy of mathematics and mathematical philosophy are frequently used interchangeably.[1] The latter, however, may be used to refer to several other areas of study. One refers to a project of formalizing a philosophical subject matter, say, aesthetics, ethics, logic, metaphysics, or theology, in a purportedly more exact and rigorous form, as for example the labors of scholastic theologians, or the systematic aims of Leibniz and Spinoza. Another refers to the working philosophy of an individual practitioner or a like-minded community of practicing mathematicians. Recurrent themes[edit] Recurrent themes include: What is the role of Mankind in developing mathematics? History[edit] The origin of mathematics is subject to argument. Many thinkers have contributed their ideas concerning the nature of mathematics. Greek philosophy on mathematics was strongly influenced by their study of geometry. 20th century[edit] Major themes[edit] Mathematical realism[edit] Platonism[edit] Some[who?]

Philosophy of mind Branch of philosophy concerned with the nature of the mind A phrenological mapping of the brain – phrenology was among the first attempts to correlate mental functions with specific parts of the brain although it is now widely discredited. Philosophy of mind is a branch of philosophy that studies the ontology and nature of the mind and its relationship with the body. However, a number of issues have been recognized with non-reductive physicalism. Mind–body problem[edit] The mind–body problem concerns the explanation of the relationship that exists between minds, or mental processes, and bodily states or processes.[1] The main aim of philosophers working in this area is to determine the nature of the mind and mental states/processes, and how—or even if—minds are affected by and can affect the body. A related problem is how someone's propositional attitudes (e.g. beliefs and desires) cause that individual's neurons to fire and muscles to contract. Arguments for dualism[edit] Behaviorism[edit]