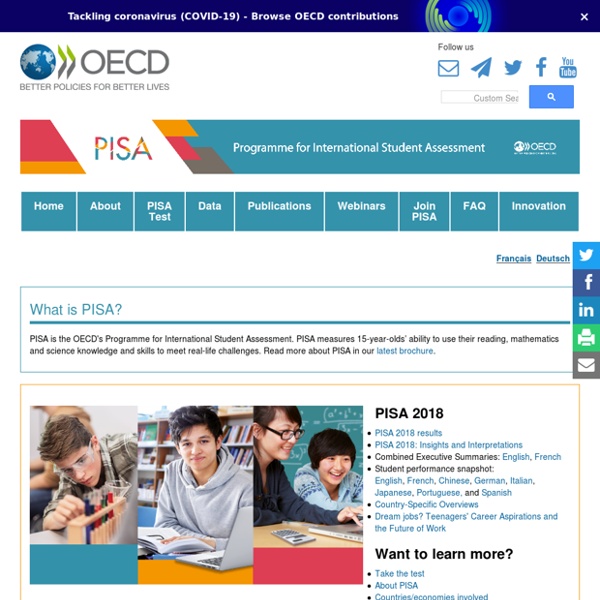 This years focus is mathematics with an additional test in creative thinking. The new PISA 2021 mathematics framework was recently launched. Preparations for this test are underway with participants from 36 OECD members and likely 50+ non-members involved. The PISA 2024 innovative domain, Learning in the Digital World, aims to measure students’ ability to engage in self-regulated learning while using digital tools. The tasks measure students’ capacity to monitor their progress, use feedback and stay engaged while they build models and develop solutions with digital tools. These skillsets are essential in preparing students to learn autonomously in an increasingly complex and digital world. Want to join PISA?

Stony Brook University - Undergraduate Research & Creative Activities (URECA) Researcher of the Month About Vi Hart There are a great many Harry Potter fans, deeply familiar with J.K Rowling's 7 book series and its elaborately constructed magical world following Harry's 7 years at Hogwarts School of Witchcraft and Wizardry. One such fan, at age 11 (the same age as Harry was when discovered his wizarding heritage!) AVID Leadership Dr. Sandy Husk, Chief Executive Officer Dr. Ten Big Ideas of School Leadership Middle school principal Mike McCarthy shares 30 years of wisdom on how to run a school well. Principal Mike McCarthy. Credit: Michael Warren During my senior year of college, I taught math to 26 inmates, none of whom had finished high school. What I faced was 26 examples of the failure of American education.

percorsiMatematica.html <table width=90% cellpadding=10><tr><td bgcolor=ff4444><span><h1>Warning:</h1><b>JavaScript is turned OFF. None of the links on this page will work until it is reactivated. <p><a href=" If you need help turning JavaScript On, click here.

Streamlining Your Life for Maximum Effectiveness Skip Advertisement This ad will close in 15 seconds... Young Entrepreneurs Today's Most Read 9 Proven Ways to Get People to Take You Seriously 4 Intangibles That Drive CEOs What It Takes to Go From Dead Broke to 6 Figures in 6 Months The Mentality of a Successful Career 4 Big Challenges That Startups Face These Siblings Are Cooking Up America's First Meatless Butcher Shop Systems thinking Impression of systems thinking about society[1] A system is composed of interrelated parts or components (structures) that cooperate in processes (behavior). Natural systems include biological entities, ocean currents, the climate, the solar system and ecosystems. Designed systems include airplanes, software systems, technologies and machines of all kinds, government agencies and business systems. Systems Thinking has at least some roots in the General System Theory that was advanced by Ludwig von Bertalanffy in the 1940s and furthered by Ross Ashby in the 1950s.

The Positive Classroom:What New (Young) Principals Need to Know The youth of the participants in our annual seminar for aspiring principals caught me by surprise. Most had been college students when the World Trade Center was attacked in 2001, and few understood schooling outside the aegis of No Child Left Behind. All were first-career teachers with just a few years of classroom experience. Some of the aspiring principals I met in that seminar have found jobs; this September, they will step into the shoes of retiring baby boomer principals. The challenges facing these young educators are unparalleled.

Strict Logic Sequences Examination - Form I Jonathan Wai - 2002 © This test was designed as an experimental measure of the high range of mental ability. I do not know what this test measures although people who score highly on this test also tend to score highly on standardized intelligence tests. However, I would urge you to consider this test as a work of logical art rather than an accurate indication of your IQ. If you wish to get an IQ score you need to contact a psychologist and have a reliable and valid IQ test administered to you. The norms for this test only give you a theoretical IQ score which is really just a guess.

Sociotechnical systems Sociotechnical systems (STS) in organizational development is an approach to complex organizational work design that recognizes the interaction between people and technology in workplaces. The term also refers to the interaction between society's complex infrastructures and human behaviour. In this sense, society itself, and most of its substructures, are complex sociotechnical systems. LeaderTalk Blog Student Led Conferences (SLC's) might seem to be new but they've been around for awhile, at least 18 years - that's when I first encountered them as a newbie teacher. Since that beginning, I've had the professional pleasure of working with a number of school staffs and communities in adopting and growing SLC's. In my current position, this was our 3rd year with SLC's.

Strict Logic Sequences Examination - Form II Jonathan Wai © 2004 This test was designed as an experimental measure of the high range of mental ability. I do not know what this test measures although people who score highly on this test also tend to score highly on standardized intelligence tests. However, I would urge you to consider this test as a work of logical art rather than an accurate indication of your IQ. If you wish to get an IQ score you need to contact a psychologist and have a reliable and valid IQ test administered to you.

Systems Thinking © Copyright Carter McNamara, MBA, PhD, Authenticity Consulting, LLC. Adapted from the Field Guide to Consulting and Organizational Development and Field Guide to Consulting and Organizational Development with Nonprofits. Three of the biggest breakthroughs in how we understand and successfully guide changes in ourselves, others and organizations are systems theory, systems thinking and systems tools. To understand how they are used, we first must understand the concept of a system. Many of us have an intuitive understanding of the concept. However, we need to make that intuition even more explicit in order to use systems thinking and systems tools. The ACM-ICPC International Collegiate Programming Contest Web Site sponsored by IBM About ICPC The ACM International Collegiate Programming Contest (ICPC) is a multitier, team-based, programming competition operating under the auspices of ACM and headquartered at Baylor University. The contest involves a global network of universities hosting regional competitions that advance teams to the ACM-ICPC World Finals. Participation has grown to several tens of thousands of the finest students and faculty in computing disciplines at almost 2,330 universities from over 91 countries on six continents.