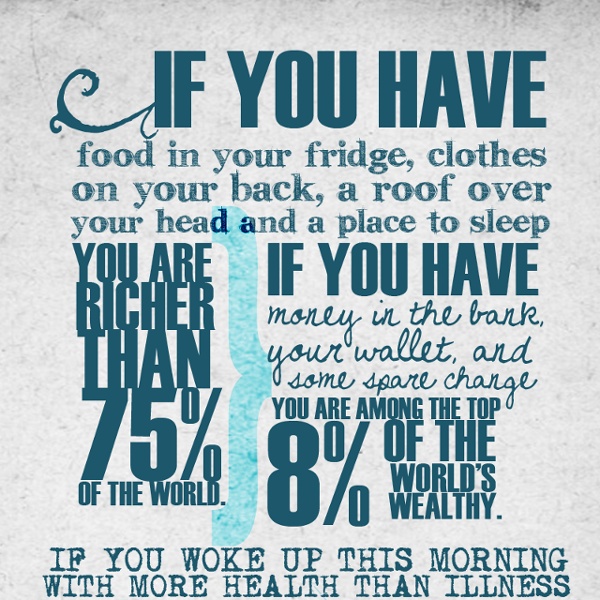 29 Semi-Productive Things I Do Online When I’m Trying to Avoid Real Work - StumbleUpon You don’t always have to work hard to be productive. Productivity can simply be the side effect of doing the right things. So here’s a list of 29 semi-productive things I do online when my mind is set on avoiding ‘real work.’ Check delicious popular tags like ‘useful,’ ‘tutorials,’ ‘tips,’ ‘howto,’ ‘advice,’ ‘entrepreneurship,’ etc. for interesting, educational articles to read.Watch one of the thousands of educational videos streaming at TED.com, Academic Earth and Teacher Tube.Read an online book list and find a new book to grab next time I’m at the library. Here’s another list.

The Surprising Realities Behind What Motivates Us in Illustrated Form -... @Blueluck: Very true - I've seen other countries where people leave their family in another country to go find work, and then to manual labor for extremely cheap just to be able to send it all home to their family. I guess that could be interpreted as their purpose, but the work is not purposeful in and of itself. I guess "pay enough to take money off the table" covers that, so we're only talking about how to motivate people after they're at the comfortable level most Americans that read this blog are at. Interesting results in India, though. Life Life is a characteristic distinguishing objects having signaling and self-sustaining processes from those that do not,[1][2] either because such functions have ceased (death), or because they lack such functions and are classified as inanimate.[3][4] Biology is science concerned with the study of life. Though life is confirmed only on the Earth, many think that extraterrestrial life is not only plausible, but probable or inevitable.[15][16] Other planets and moons in the Solar System have been examined for evidence of having once supported simple life, and projects such as SETI have attempted to detect radio transmissions from possible alien civilizations. According to the panspermia hypothesis, microscopic life exists throughout the Universe, and is distributed by meteoroids, asteroids and planetoids.[17] Early theories Materialism

100 Ways to Uncomplicate Your Life — Live The Charmed Life 1. Don’t try to read other people’s minds 2. Get up 30 minutes earlier so that you don’t rush/get a ticket while driving too fast/have to explain why you’re late/get fired 3. Top 10 Town Planning Fails Top 10 Town Planning Fails Posted By Ben Goulding, 5 March, 2010 | permalink Town planning is important to ensure a good economic and social environment for the community, but sometimes it goes wrong.

7 Lessons From 7 Great Minds - Global One TV - StumbleUpon Have you ever wished you could go back in time and have a conversation with one of the greatest minds in history? Well, you can’t sorry, they’re dead. Unless of course you’re clairaudient, be my guest. But for the rest of us, we can still refer to the words they left behind. Family tree of the Greek gods Key: The essential Olympians' names are given in bold font. See also List of Greek mythological figures 10 Myths About Introverts 10 Myths About Introverts By Carl King [ Translations: Spanish | German | Dutch | Italian ]