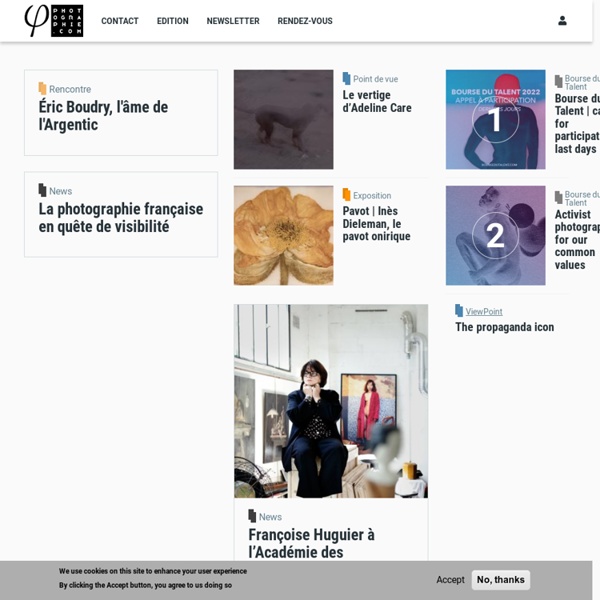 Vertical Forest: An Urban Treehouse That Protect Residents from Air and Noise Pollution © Beppe Giardino A potted forest of trees and branching steel beams disguise this 5-story apartment building in Turin, Italy. Designed by Luciano Pia, 25 Verde brings plants up off the ground in an attempt to evade Turin’s homogeneous urban scene and integrate life into the facade of the residential building. Joel Meyerowitz Once More Around The Sun Blog Launched Photo © Joel Meyerowitz What happens when a street photographer who thrives on the energy of the choatic streets of New York City moves to a small town in the South of France? Joel Meyerowitz Once More Around The Sun answers this question in the form of a visual diary and it’s a fascinating look at how a master street photographer copes without the hustle and bustle of city streets. Hit the jump for more info.

Colin Pantall's blog: The Best Photographers are Stupid? Kind of. Grass by Michele Tagliaferri is a book that combines the theme of the elemental with the fundamentals of thematic/geometric and colour sequencing. At the moment, I feel slightly saturated with the poetic and metaphysical so it's probably not the best time for me to review it. That being said, it is a lovely book, beautifully printed and hitting all the major elemental themes. There's earth, air, fire and water in there, and there's human flesh - all pasty and malleable, more dead than alive.

Photographer Spends 25 Years Following Whales And Dolphins, The Magnificent Photos Will Take Your Breath Away. - InspireMore Christopher Swann is a British photographer who has been following his passion for the past twenty-five years. Spending years diving and exploring the ocean, Swann has formed an extreme talent for taking pictures of cetaceans like whales and dolphins. What’s amazing is that his photos are both above and below water. With subtle tones of colors and smooth waters, his photos come out with an elegant theme that captures the true beauty of the animals in their natural habitat. Here are some highlights from his interview with My Modern Met:

Inspiration Archives - PetaPixel VICE 2015 Photo Issue Offers a Powerful Look at the World Around Us Established in 1994, VICE Media is an agency focused on covering the arts, modern culture, and recent events of our world. This month, the media company has released their yearly photo issue (Volume #22 Issue #7) in collaboration with Magnum Photos and Magnum Foundation. Eugene Richards: Trust yields photos with emotion - Global Journalist Award-winning photographer Eugene Richards’s specialty is intimacy. “I usually don’t photograph something that I can’t touch,” he says. For more than 50 years, Richards established personal relationships with the people he photographed. That’s no small feat given the subjects he’s covered, which include drug addiction, poverty and cancer. The personal nature of his photographs leaves viewers full of emotion and forces them to confront uncomfortable issues.

AP Images Blog Photos by David Guttenfelder When North Korea opens its doors, it does so for a reason. So it was when the authoritarian government granted permission for a road trip so extensive that few North Koreans — let alone a pair of American journalists — could imagine taking it. We drove 2,150 kilometers (1,336 miles) in a country that has barely 25,000 kilometers of road, and only 724 kilometers of those paved.