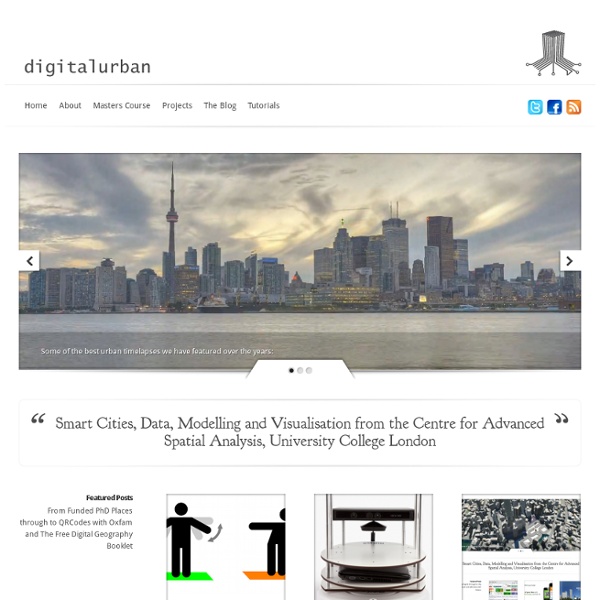 Linking a 1940′s Radio to the Internet of Things In the corner of our apartment we have an old 1940's radio,… IFTTT, Netatmo & Philips Hue: Linking Data to Lighting Here at The Bartlett Centre for Advanced Spatial Analysis we run a simple dashboard view… Happy Christmas and a Happy New Year (Movie) 2013 has been quite a year for research - the Smart/Future Cities…

News and Features — eBird Bird Academy giveaway: Waterfowl ID Do you enjoy watching waterfowl, but sometimes have trouble telling scaup or teal apart? We’ve all been there, and we can help! We’re excited to partner with the Cornell Lab’s Bird Academy to offer a suite of exciting educational resources in thanks for your eBirding: in February, every eligible checklist that you submit gives you a chance to get free access to Be a Better Birder: Duck and Waterfowl Identification. February eBirder of the Month Challenge Sharing is caring. Kelso I prompted a flurry of PostGIS hate (and some love) on Twitter last week, documented via Storify. I’ve been using PostGIS for around 2 years now both at Stamen and before that at The Washington Post. Let me say upfront that PostGIS is amazing and is definitely in the top 5 best FOSS4G (free and open source software for geo) out there. It is a super powerful spatial data store that is free to download, install, and use (even in commercial projects!).

Sprawled Out: The Search for Community in the American Suburb Avert your eyes: The obscenity that is Franklin's 31st Street. At rush hour. We often hear city officials proclaim their view of the "natural" progression of a road as needing to be BIGGER and WIDER as the years go on. A few years back, aldermen in my city lobbied hard for an obscenely wide road to be built behind the Northwestern Mutual Life headquarters. After all, went the argument, it'll need to get that big eventually.... This viewpoint is deeply flawed, to say the least, and it's costing our cities an enormous amount of money.

About MANU FERNÁNDEZUrban policies analysis / Strategic urban thinker and designer of innovative urban actions Interested in working on projects related to urban economy, local sustainability, urban innovation processes and actions, digital cities and civic engagement in public space. My research and consulting activity has been focused on three main fields:• Adaptive urbanism: I have been concerned of how economic crisis is impacting cities, basically in the Spanish context (but using international cases as a reference) and I am advocating for an adaptive urbanism. This is based on the idea that we suffer three main problems we have to face and work on together: economic restrictions (which means the age of big urban interventions is over), climate change (which means we need to adapt built environment) and a social change that is transforming society with new paradigms of learning, governance, companies,..

Insider Story Maps for “Bread and Butter” Applications Story Maps are fun, easy, and informative. Their popularity is documented by the many interesting examples you will find at the Story Maps Gallery. An enduring favorite of mine is not the most sophisticated, or provocative, or one that required … Continue reading Blog – Art in Odd Places By Matthew Morowitz Exhibition view of Carmel Ni’s “Folded Relativity,” 2013. Photo courtesy of Kaitlyn A. Kramer. In the late hours of January 24th, 2014, I was heading back to my friend’s place in Greenpoint, Brooklyn, when on the way he became interested in music and activity that he had noticed coming out of what looked like an abandoned corner store on Nassau Street. After inquiring what was going on, my friend and I stepped inside what we were told to be an art show.