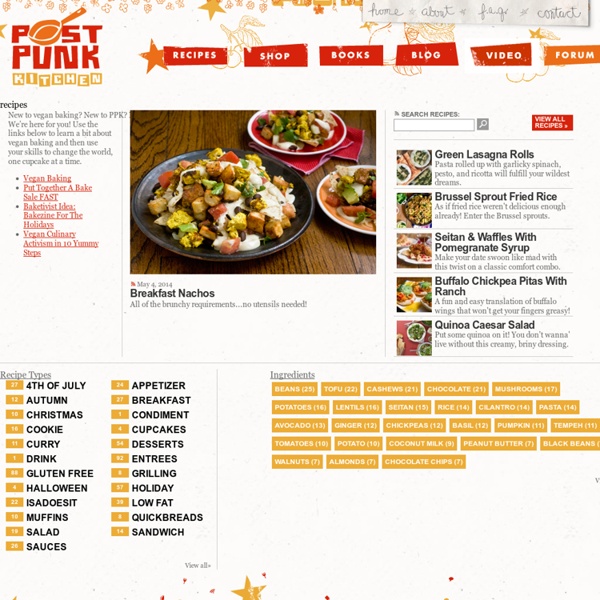 Post Punk Kitchen recipes New to vegan baking? New to PPK? New to baketivism? We’re here for you! May 4, 2014 Breakfast Nachos All of the brunchy requirements...no utensils needed! View all recipes » Recipe Types View all» Ingredients View all»

vegan baking?! | nom! nom! nom! blog.com Vegan bak­ing may seem impos­si­ble, espe­cially if you are some­one who has been sub­jected to some awful vegan baked goods. But it’s not veg­an­ism mak­ing them bad. Think of how many con­ven­tional baked goods you have had that were lack­lus­ter or down­right gross. Dry, crumbly cake, hard cook­ies, soggy pies, we’ve all eaten them. And let’s be hon­est.. if it was your first time eat­ing a vegan baked good don’t you think you might have been expect­ing some­thing to taste dif­fer­ent, and so it did? But back to vegan bak­ing. But first, a vegan bak­ing primer. Sug­ars– Sugar cane is refined using ani­mal bone char­coal fil­ters. But­ter– Clearly not vegan. I real­ize, how­ever, that not every­one has access to stores that stock explic­itly vegan mar­garine. Milk– How now, vegan cow? Eggs– Replac­ing eggs in baked goods seems like a daunt­ing task when you first take the plunge into vegan bak­ing, but it turns out that it’s sim­ple, tasty and effec­tive. To replace 1 egg try:

Tofu Tikka Masala Recipe | Dairy-free, Vegan | Slow Cooker Option I can’t believe that I’ve had my vegan tikka masala recipe hanging out in my Google Drive for fully THREE years and finally remade it to share it with you! Just food blogger problems I guess. The list of future recipes is always growing infinitely larger :). This is a slow cooker tofu tikka masala – start by sauteeing a few aromatics and spices in a pan, but then transfer everything to your Crock Pot (or pressure cooker!) Traditional chicken tikka masala (which, I’ll add, is thought to actually originate from the UK) involves marinating the protein in a spiced yogurt mixture before starting the curry. You can mix up this tofu tika masala by substituting chickpeas or adding vegetables like sweet potato or cauliflower; but I happen to like it exactly as written. Aside from turning this curry vegetarian, I had to do something about the cream normally found in this recipe. Hearty, creamy, delicious tofu tikka masala that cooks in your slow cooker or Instant Pot for easy meal prep. Iron 22%

Home - Pastry Affair Creamy Vegan Mac and Cheese No, it isn’t cheese…even though it kind of looks like it. Instead, it’s a creamy, flavorful alternative to the dairy stuff that will leave you richly satisfied in your decision to leave the cows alone. I always feel bad when a non-vegan tastes vegan “cheese” for the first time. Like, how can this stuff be described except to call it a cheese alternative? Therefore, may I introduce you to not-real-cheese-but-still-delicious-creamy-yellow-sauce-over-macaroni?? Okay, that’s just way too cumbersome. Whatevs. A few weeks ago, I discovered this recipe for vegan macaroni and cheese which was described by VegNews to be the “best on the planet.” I just had to replace it with something else. So, today I bring you my crazily adapted recipe and what has become my favorite vegan mac and cheese–with no refined oil. Who knew that potatoes, carrots, onion, cashews, coconut milk, and seasonings could make such a fabulous creamy combination? Can I just eat it out of the pan like a bachelor? Cuisine: American

Recipes | Currylicious Roasted Fennel Soup Posted by Currylicious on April 21, 2014 · 1 Comment Recently I went to this restaurant which had some awesome Italian dishes of which their Roasted Fennel Soup blew me away! The soup was delicious and I made up my mind to recreate that dish excepting I did not want to use potatoes. The roasted fennel soup in the restaurant had potatoes which according to … Continue reading Baked baby eggplant topped with onion, habanero mango salsa, goat cheese and basil Posted by Currylicious on March 20, 2014 · 1 Comment I love baby eggplants but in India we always removed the skin and cooked it to a point where it gets mushy and it would drive me nuts when my mom would insist that i eat this mushy eggplant curry with my rotis/bread. Poached eggs with Carrot & Potato Puree and toasted brioche bun on top Posted by Currylicious on March 11, 2014 · Leave a Comment This is my take on a French dish inspired by Jaques Pepin the legendary French Chef whom I respect and admire a lot.

How to Make the Best Vegan Grilled Cheese » I LOVE VEGAN The classic grilled cheese sandwich – is this really something you need a recipe for? Perhaps not, but when we first went vegan, we didn’t enjoy a proper grilled cheese sandwich for months. Why? When I finally did make one, I figured that the only key difference to making a vegan grilled cheese would be to swap in vegan cheese for dairy cheese. First of all, I’d suggest using less vegan cheese than you would use dairy. 1/3 cup of vegan cheese shreds should be just about perfect. Where we live, there aren’t a whole lot of options for vegan cheese so I can’t tell you which brand is THE ABSOLUTE BEST. Our go-to for grilled cheese sandwiches are the Daiya Shreds (a mix of Mozzarella and Cheddar Style shreds is best.) Use a vegan butter for the classic fried flavour. Next we have one of my favourite tips: after frying, sprinkle the outside with a little bit of extra cheese and cook briefly to add a little crispy fried cheese flavour. Now it’s time to eat! Author: Brittany at ilovevegan.com

Sweetapolita – whipping up a sweet life . . .