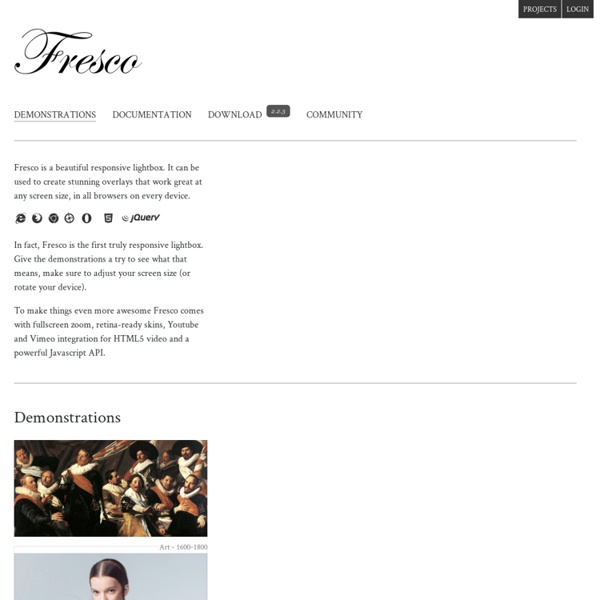 iPad GUI PSD Now that Apple has officially released the iPad we want to start designing for it. While Apple’s interface builder is great, it doesn’t really allow us to create custom UI elements on the fly. We decided to take a page from our iPhone GUI PSD and create one for the iPad. The PSD was constructed using vectors, so it’s fully editable and scalable. It’s 1.0 so I’m sure we’ll notice missing elements as we begin to use it. If you like it or use it, help us out by retweeting it.

Beyond Bootstrap and Foundation: Frameworks You've Never Heard Of Front-end frameworks like Twitter bootstrap, Foundation by ZURB and others are great for creating beautiful, responsive, cross-browser friendly web sites quickly and easily without the need to learn a lot of code or best practices. While Bootstrap and Foundation are two of the more well-known front-end frameworks, there are other great frameworks available that many of you probably haven’t heard of. In this article I’m going to list some of these so you can consider giving them a try. Semantic UI Semantic UI is a really nice user interface kit that uses LESS. Components offered by Semantic UI include button, divider, icon, image, label, reveal, segment and lots more. Other features of the framework include the ability to add a ‘disabled’ state on images, and icons that can be formatted with different colors and sizes. Semantic UI comes with tons of features (elements, collections, modules, behavior, etc.), many of which are unique to it. Semantic UI Frameworks and Packages Ionic UIkit Brick

iOS 6 GUI PSD (iPhone 5) Of all the iOS GUI Photoshop documents we’ve created over the past 4 or 5 years the one for the iPhone is by far the most popular. We take these things pretty seriously because we use them on a daily basis ourselves. This version, iOS 6 for iPhone 5, is a bit different than previous versions. Those of you who have downloaded and used these files have probably noticed they’ve become quite bloated. As fast as our computers are today, they still get pretty sluggish when working in a document that contains tens of millions of pixels with hundreds of shape layers. This time around we focussed on making the file a bit more usable. We get asked a lot why it’s free. We hope you like it. Download PSD (iPhone 5)

Semantic Versioning 2.0.0-rc.2 Skeleton: Beautiful Boilerplate for Responsive, Mobile-Friendly Development Design Principles These design principles were developed by and for the Android User Experience Team to keep users' best interests in mind. For Android developers and designers, they continue to underlie the more detailed design guidelines for different types of devices. Consider these principles as you apply your own creativity and design thinking. Deviate with purpose. Enchant Me Delight me in surprising ways A beautiful surface, a carefully-placed animation, or a well-timed sound effect is a joy to experience. Real objects are more fun than buttons and menus Allow people to directly touch and manipulate objects in your app. Let me make it mine People love to add personal touches because it helps them feel at home and in control. Get to know me Learn peoples' preferences over time. Simplify My Life Keep it brief Use short phrases with simple words. Pictures are faster than words Consider using pictures to explain ideas. Decide for me but let me have the final say Only show what I need when I need it

Recently I worked with Art Processors to create... - German for black Recently I worked with Art Processors to create the “Replay” feature for The State Library of New South Wales’ “Curio” — Essentially, you get to see which exhibits you viewed at the gallery after you’ve left (you’re geotagged through the building as you explore). One particular part of this build proved difficult, I thought it may be worth sharing — The polygonally (is that a word?) masked images: To get this effect to work on webkit browsers, I was able to use the proprietary webkit feature: -webkit-mask-image, with an SVG polygon image. In Firefox (or browsers that actually handle SVG well) — I hand modified the SVG polygon image, adding a clipPath that also contained a copy of the original polygon. I also added some IDs so that the clipPath and original polygon could be referenced separately, then it was just a matter of changing the CSS so webkit would reference the polygon and Firefox would use the clipPath.