Tools and tactics for your digital security 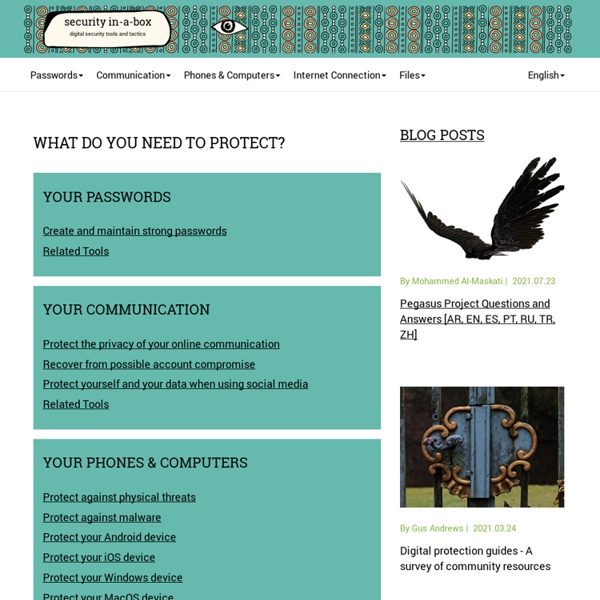 Julian Assange on His New Book, When Google Met WikiLeaks Julian Assange, the 43-year-old founder and editor-in-chief of WikiLeaks, has been living in the Ecuadorian Embassy in London since June of 2012. He occupies a single room in the building, a couple hundred square feet of space cluttered with work and life. He avoids using email and tries to interact with his staff only in person. “I have to act like Osama bin Laden now,” he writes in his recently published book, When Google Met WikiLeaks (OR Books). The book chronicles the afternoon in 2011 when he was visited by four individuals: Eric Schmidt, executive chairman of Google; Jared Cohen, director of Google Ideas; Lisa Shields, vice president of the Council on Foreign Relations; and Scott Malcomson, the communications director for the International Crisis Group. Ecuador has granted Assange asylum, but the United Kingdom will not allow Assange, who is Australian, passage to South America. But there’s a difference between leadership and direction—coercive control over something.

Verification Handbook: homepage Web Liberty and Privacy The fifth and sixth public meetings of Google’s advisory council met in Berlin and London recently, inviting experts and the public to discuss the outcome of the recent “right to be forgotten ruling” made by the European court of Justice. Adviser Luciano Floridi explains the consultations. One of the crucial questions of our age is who may legitimately exercise what power over which kind of information. This is also one of the thorny issues raised by the ruling of the European court of justice (ECJ) against Google on the so-called “right to be forgotten”. The question is complicated because one may interpret “who”, “what power” and “which information” in many ways and end up talking at cross-purposes. In terms of power, the last three are legal entities that do not generate the personal information or its links (the two relevant types of information under discussion) but can determine how the other entities manage both. The mess concerns the first three entities.

Follow the Money: a Digital Guide for Tracking Corruption The digital age has profoundly transformed the way people find and share information. The Internet is enabling collaboration between activists, hackers and journalists on an unprecedented scale. This has led to previously unimaginable possibilities in investigative reporting. People are newly empowered to uncover hidden information, expose corruption and bring the truth to light. Through a series of short films, Exposing the Invisible tells the personal stories of those working at the new frontiers of investigation. We explore their tools and methods and learn how they manage the risks of information activism. We hope that Exposing the Invisible will inspire a new generation of people committed to transparency and accountability. New movies will be uploaded to our website regularly. This project would not have been made possible without our sponsors and all the people who have contributed. If you watched the films, it would be great to know what you thought.

Assange: Google Is Not What It Seems In June 2011, Julian Assange received an unusual visitor: the chairman of Google, Eric Schmidt, arrived from America at Ellingham Hall, the country house in Norfolk, England where Assange was living under house arrest. For several hours the besieged leader of the world’s most famous insurgent publishing organization and the billionaire head of the world’s largest information empire locked horns. The two men debated the political problems faced by society, and the technological solutions engendered by the global network—from the Arab Spring to Bitcoin. They outlined radically opposing perspectives: for Assange, the liberating power of the Internet is based on its freedom and statelessness. Newsweek Magazine is Back In Print In this extract from When Google Met WikiLeaks Assange describes his encounter with Schmidt and how he came to conclude that it was far from an innocent exchange of views. I was intrigued that the mountain would come to Muhammad. Some time later Jared Cohen arrived.

How To Combat Online Surveillance | The Occupied Times - Iceweasel Governments have transformed the internet into a surveillance platform, but they are not omnipotent. They’re limited by material resources as much as the rest of us. We might not all be able to prevent the NSA and GCHQ from spying on us, but we can at least create more obstacles and make surveilling us more expensive. The more infrastructure you run, the safer the communication will be. Download installation software for these programs. Includes all you’ll need to access the Tor Network. Makes it more difficult to trace Internet activity: Web browsing, online posts, instant messages and other communication forms. Many features to help you easily clean your computer, free-up space and maintain privacy. A live operating system. Comes with several built-in applications pre-configured with security in mind: web browser, instant messaging client, email client, office suite and more. Create virtual hard drives which encrypt any files you save onto them. A simple plugin for Pidgin.

Lone lawyer sues Obama, alleging illegality of surveillance programs Justice Department lawyers have asked a federal court in Pittsburgh to dismiss a sweeping lawsuit brought earlier this year by a local lawyer against President Barack Obama and other top intelligence officials. In a new motion to dismiss filed on Monday, the government told the court that the Pittsburgh lawyer, Elliott Schuchardt, lacked standing to make a claim that his rights under the Fourth Amendment have been violated as a result of multiple ongoing surveillance programs. Specifically, Schuchardt argued in his June 2014 complaint that both metadata and content of his Gmail, Facebook, and Dropbox accounts were compromised under the PRISM program as revealed in the documents leaked by former National Security Agency (NSA) contractor Edward Snowden. In an e-mail to Ars on Wednesday, Marcia Berman, a senior trial counsel who authored the motion to dismiss, said, "Per department policy, attorneys do not comment to the media on litigation." As Berman wrote in the motion to dismiss:

Right to Online Privacy at Risk as Governments Engage in Mass Surveillance – Counter-terrorism Expert Human Wrongs Watch States must be transparent about the nature of their electronic mass surveillance programmes, an independent United Nations counter-terrorism expert said on 23 October 2014 as he warned about the impact such measures might have on individuals’ right to privacy. “States need to squarely confront the fact that mass surveillance programmes effectively do away with the right to online privacy altogether,” Ben Emmerson, Special Rapporteur on the promotion and protection of human rights while countering terrorism, told the General Assembly body dealing with cultural, social and humanitarian issues (Third Committee) during the presentation his latest report. “No” to the Analogy that “Sending an email is like sending a post-card” Emmerson has long emphasized the need for transparency and accountability in government intelligence gathering operations. “Individuals must have the right to seek an effective remedy for any alleged violation of their online privacy rights,” he said.

Snowden Attacks “Anything Goes” Privacy Intrusions Of British Spy Agencies In what amounts to a wake up call directed at a British public generally considered apathetic on privacy issues, NSA whistleblower Edward Snowden has warned that U.K. spy agencies are using digital technology to conduct mass population surveillance without any checks and balances at all — overreaching and encroaching on privacy rights in a way that he characterized as even worse than the U.S. National Security Agency’s inroads into citizens’ rights. Snowden was making his first (virtual) appearance in the UK since blowing the whistle on the NSA last year, speaking at the Observer Festival of Ideas event being held today in London. “We have an extraordinary large, secret and unaccountable mass surveillance system in the United States — and that’s when we have constitutional protections that prohibit even the passage of any laws that might enable those programs. “GCHQ and other British spy agencies can do anything they want. “That’s not how rights work, right,” he said.

Julian Assange: Google’s Basic Business Model ‘Same as the NSA’s’ In a conversation with “Imaginary Lines” host Chris Spannos, WikiLeaks founder and Editor-in-Chief Julian Assange discussed his new book, “When Google Met WikiLeaks,” which is based on a conversation Assange had with Google Executive Chairman Eric Schmidt. Assange’s book was published by OR Books on Sept. 18. Spannos asked Assange why he described Google as an “empire.” Assange responded: “That phrase, ‘evil empire,’ was introduced by Reagan in the 1980s to describe the Soviet empire. But of course encoded within that is that the other empire is not an evil empire. teleSUR English:

Wikileaks Publishes Updated Intellectual Property TPP Chapter Today, Thursday 16 October 2014, WikiLeaks released a second updated version of the Trans-Pacific Partnership (TPP) Intellectual Property Rights Chapter. The TPP is the world’s largest economic trade agreement that will, if it comes into force, encompass more than 40 per cent of the world’s GDP. The IP Chapter covers topics from pharmaceuticals, patent registrations and copyright issues to digital rights. Despite the wide-ranging effects on the global population, the TPP is currently being negotiated in total secrecy by 12 countries. The selective secrecy surrounding the TPP negotiations, which has let in a few cashed-up megacorps but excluded everyone else, reveals a telling fear of public scrutiny. The 77-page, 30,000-word document is a working document from the negotiations in Ho Chi Minh City, Vietnam, dated 16 May 2014, and includes negotiator’s notes and all country positions from that period in bracketed text.

Julian Assange - Google Is Not What It Seems Google Is Not What It Seems by Julian Assange Google Chairman Eric Schmidt shares a joke with Hillary Clinton during a special "fireside chat" with Google staff. In this extract from his new book When Google Met Wikileaks, WikiLeaks' publisher Julian Assange describes the special relationship between Google, Hillary Clinton and the State Department -- and what that means for the future of the internet. ric Schmidt is an influential figure, even among the parade of powerful characters with whom I have had to cross paths since I founded WikiLeaks. In some ways the higher echelons of Google seemed more distant and obscure to me than the halls of Washington. I was intrigued that the mountain would come to Muhammad. The stated reason for the visit was a book. Director of Google Ideas, and "geopolitical visionary" Jared Cohen shares his vision with US Army recruits in a lecture theatre at West Point Military Academy on 26 Feb 2014 (Instagram by Eric Schmidt) Schmidt was a good foil. Notes Ibid.

Verizon Wireless tracking on its customers by injecting UID into all HTTP requests made on the VZW network Verizon Wireless, the United State’s largest telecom operator, has moved into the mobile ad business. They have been serving ads since May 2014. Whatever Verizon does to earn revenues is nobody’s business but it seems that Verizon is tracking the customer habits to publish their ads. As per a research published by, Jonathan Mayer, a computer scientist and lawyer at Stanford, who takes consumer privacy very strongly, Verizon is using the headers in the HTTP section to track its customers and gauge their spending habits. Verizon Wireless is injecting a unique identifier (UID) into web requests, as data transits the network in each and every customer of Verizon Wireless Network (VZW). As per the law only those who have opted for CPNI can be monitored through such methods. On my phone, for example, here’s the extra HTTP header.X-UIDH: OTgxNTk2NDk0ADJVquRu5NS5+rSbBANlrp+13QL7CXLGsFHpMi4LsUHw Mayer has made a brief infographic of how he feels the header is working :