What The Most Successful People Do Before Breakfast 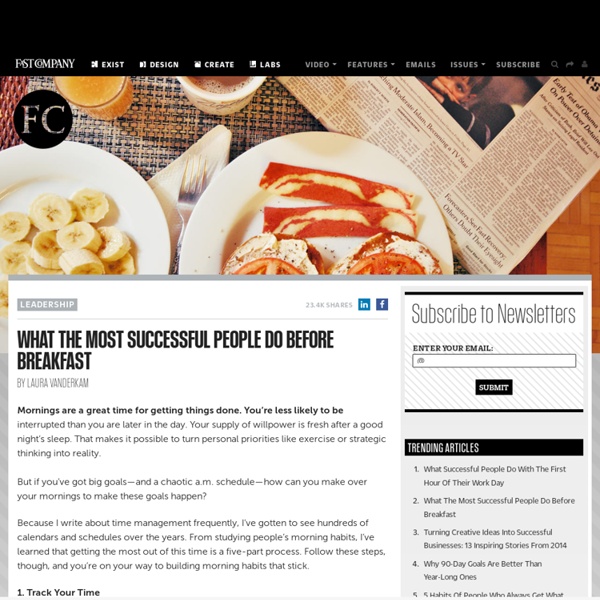 Mornings are a great time for getting things done. You’re less likely to be interrupted than you are later in the day. Your supply of willpower is fresh after a good night’s sleep. That makes it possible to turn personal priorities like exercise or strategic thinking into reality. But if you’ve got big goals—and a chaotic a.m. schedule—how can you make over your mornings to make these goals happen? Because I write about time management frequently, I’ve gotten to see hundreds of calendars and schedules over the years. 1. Part of spending your time better is knowing how you’re spending it now. While measuring your mornings, try tracking your whole week. As for the mornings themselves, you can be organized but still not be spending them well. 2. After you know how you’re spending your time, ask yourself what a great morning would look like. For personal growth: For professional growth: Strategize: In an age of constant connectivity, people complain of having no time to think. 3. 4. 5. Related:  Career, Enterprise

ONLINE PRODUCTIVITY GOD: 400+ Resources To Make You Smarter, Faster & a Demon in the Sack Getting things done isn't easy. In fact, it's incredibly tough. In this article, we look at four ways to get through your work faster: running your life online, mastering RSS news feeds, aggregating your social networks and using keyboard shortcuts to save precious seconds. This information is compiled from previous Mashable articles: more related articles appear at the bottom of this post. When it comes to getting things done, the web can be a real distraction. Word Processing Services Online word processing provides you with ways to manage and write documents without a download - great for collaboration or those using multiple computers. Google Docs - A way to create your documents and share them too. Zoho Writer - Serious competition to Google Docs. ThinkFree - Think Microsoft Office, except this is the online equivalent. Buzzword - A recently discovered service that is still in private beta. Web Portals Netvibes - Generally considered to be the first successful, independent startpage. Snag

How Intangible Corporate Culture Creates Tangible Profits Imagine a person from another planet turning up at a funeral here on Earth. Without having to be told, he would know that a funeral is not an appropriate place to tell jokes. This, Professor Michael Tushman tells his class at Harvard Business School, is the meaning of culture. But culture does more than inform every individual in an organization what attitudes and behaviors are expected of them. Like a garden, organizational culture develops whether or not you design it. Although cultivating a great culture demands a lot of emotional investment, leadership wisdom, and a genuine care for people, it is a financially low-cost investment with a high economic return. We are accustomed to thinking that the intangibles of life exist separately from tangible things; material things separated from spiritual, personal things distinct from commercial. Southwest Airlines is probably the greatest success story in American airline history in terms of turning intangibles into monetary value.

How Google's Marissa Mayer Prevents Burnout UPDATE: Marissa Mayer was named chief executive officer of Yahoo Inc. July 16, 2012. Many entrepreneurs don't even think twice when it comes to working around the clock. Marissa Mayer, Google's 20th employee and current vice president of location and local services, is no exception. When Google was a young company, she worked 130 hours per week and often slept at her desk. "For my first five years at Google, I pulled an all-nighter every week," Mayer said in a recent talk at New York's 92Y cultural center. Hard work, she says, has been the key to Google's success, as well as her own. For young companies that demand so much of their employees, hard work can spiral into burnout. Step 1. Her assessment is right on target. Related: 3 Postures to Boost Productivity Now Step 2. "People--particularly entrepreneurs--can put in huge amounts of energy and time," Leiter says. Related: A Secret to Creative Problem Solving Step 3. "You can't have everything you want," Mayer cautions.

Could Data Science Reduce Resume Overload? A new job board called Bright aims to kill resume overload with a little bit of data science. Instead of encouraging candidates to apply for as many jobs as possible, Bright promises to cut down on unnecessary resume exchanges by showing both parties what is the best fit for them. To do so, the startup analyzed 2.8 million resumes submitted in response to more than 2.1 million job descriptions on its beta site. Hundreds of HR recruiters looked at the resumes and rated them based on compatibility with their corresponding descriptions. Meanwhile, a team of about 15 data scientists and engineers tracked the ratings and used them to develop an algorithm that not only predicts such compatibility, but also learns more about a specific employer's preferences as that employer uses the site. Like competing job site Path.to, it feels a little like a dating site. Job seekers can see their scores for each job while they're browsing the site. Image courtesy of iStockphoto, fotosipsak.

Be More Productive. Shorten the Workweek. Change is important. When we were growing up, we got summers off from school. Summer vacation was change. It was something to look forward to. We grow out of a lot as we grow up. Work in February is the same as work in May. Yes, some businesses are more seasonal than others, but ultimately the stuff we do at work isn’t that much different — it’s just busier some times than others. I wanted to do something about this. For example, from May through October, we switch to a four-day workweek. Most staff workers take Fridays off, but some choose a different day. The benefits of a six-month schedule with three-day weekends are obvious. When there’s less time to work, you waste less time. At 37signals there’s another thing we do to celebrate the seasons: we cover the cost of a weekly community-supported agriculture share for each employee. In the spirit of continual change, this summer we tried something new. People worked independently or joined up with other employees on team projects.

5 Unexpected Downsides of High Intelligence You know that phrase, "Ignorance is bliss"? There's a reason it's stuck around all these years. Because having the upper hand in intelligence might give you an advantage in some areas, like crossword puzzle solving and quantum physics-ing, but it also might just screw up your life forever. Note: Stephen Hawking can talk about how dangerous AI will be in the future, but we're not worried. Because, as this Cracked Classic shows, the more dangerous dangerous robots gather, the more they'll sabotage their own well being, until all the Terminators work themselves to death while the ED-209s drown their inadequacy issues in robo-whiskey. So enjoy this article, and be less scared of robots. For instance, if you're smart ... #5. Getty Recently, scientists discovered a quirky side effect to having a high IQ: You tend to stay up until later hours and get up later in the morning. Photos.comAnd spending reports. So let the early birds keep their measly worms. So What's the Problem? #4.

Social Media Advertising Software for Brands & Agencies | GraphEffect Open Marketing Cloud Company Newsroom Where Brand Marketing Meets Business Outcomes Your customers are spread across devices and channels. Through our brand specific solutions you can access all the tools and data you need on one platform. Plan Advertise Analyze Customize All the tools you need to strategize, plan and execute a marketing campaign with your team. Manage and optimize your advertising campaigns across social channels and any device type. Bring together all of the data relevant to your business, in one place, and make it actionable. Install third party integrations with 1-click in order to meet your specific business goals. Smart and flexible marketing software for planning, optimizing and analyzing social advertising campaigns. SHIFT Top Ranked in Forrester Wave Social Advertising Platforms Not convinced? You're in Good Company 10 of the top 20 global brands work with SHIFT Official Platform Partners Never Miss An Opportunity To Convert a Customer It's Time to Redefine Your Brand Marketing

Win the Business with this Elevator Pitch - Steve W. Martin by Steve W. Martin | 7:00 AM August 22, 2012 Pretend that you are in an elevator at one of your industry’s trade shows. You’re heading down to the lobby when the doors open on the thirtieth floor. You instantly recognize the executive who walks in and quickly glance at his name badge to confirm he is the CEO of the most important account you would like to start working with. So, how did you do? They use truisms: They believe their company’s own marketing pitch, which makes claims that are not considered entirely true by the listener. They describe themselves using buzzwords: They repeat industry buzzwords or, worse yet, use technical buzzwords that are known only within their company. They use fillers: They make too much small talk or ask frivolous questions that reduce their stature to the customer. They demean themselves or the listener: Their statements turn them into mere salespeople, not business problem solvers. Here’s an example of a poor elevator pitch. Hello, Norman.

5 Seemingly Innocent Ways You Risk Your Identity Every Day We tend to think of identity theft as a crime perpetrated exclusively on stupid people. Sure, you don't fall for that Nigerian prince schtick and you don't send your login information to "official" emails that misspell "PayPal." Well, you'd best take a slice of humble pie, because there are lots of things that you do every day, that you're probably doing right now, that are putting your personal information at risk. Playing Facebook Games Getty After a long, hard day of playing Facebook games and pretending to work, there's nothing quite as relaxing as heading home to unwind and play Facebook games without pretending to work. Getty"Before 'Farmville,' gin was the only thing that could get me through a day of work." We've already discussed how Zynga, the operators of "Farmville," are evil masterminds. But hey, 'Mafia Wars'! And we don't just mean they could see all those pictures of you drunkenly fingering that elephant pinata at your cousin's birthday blowout. Getty"Tits? Getty"There.