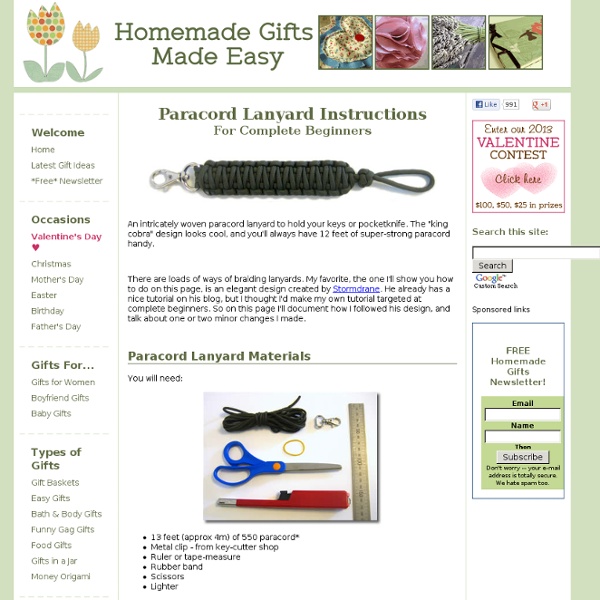 Paracord Projects | Paracord Projects Instructions, Videos, Reviews, Paracord Lanyard and Supplies Ultimate Survival Band Blank - 9 Inch This band is made with 15’ of black 550 paracord, the clasp toggle is made of flint, the tag is stainless steel and is attached with jute twine. To use the band you would first remove the jute string and stainless steel tag (striker), take the jute twine and fluff in to a birds nest, take the flint (clasp) in one hand and the striker in the other, scrape the striker against the flint while resting in the jute twine, you will create a spark that will light the jute. Then add twigs to get the fire going, eventually wood. You can also use the back of a knife to strike against the flint if you have other means of tinder to start the fire without breaking down the band. Recharging the band, take any crochet needle with eye hole, then lace back in to band with the striker for the next time. This band comes with 2 fishing hooks, 3 weights and 20 feet of braided fishing line. Blank - no engraving SHIPPING TIMES: Most, but not all orders leave our warehouse within 1-7 business days.

Adding Paracord to Water Bottles and another Paracord Can Koozie... Here are a couple of examples of adding paracord to water bottles. A 25 foot length was used for the one in a 'whipping' pattern on the aluminum water bottle. And a 40 foot length was used in a woven pattern on the white stainless steel water bottle. Both started off with coiling the cord around the bottles, with the starting end just held in place with a rubber band and later tucked to finish. The 'whipping'(snaking) version, an example is seen in Geoffrey Budworth's 'The Complete Book of Knots', is easily zigzagged and looped around a couple of coils on each end of the paracord coiled wraps, and tucked to finish. The woven version resembles 'grafting' type knot work, as seen in Stuart Grainger's 'Creative Ropecraft', but is instead a single length of cord. I used a Perma-Lok Jumbo Lacing Needle to feed the paracord over/under as I worked, as well as a pair of hemostats/forceps. Here's a woven paracord can koozie, done with a 25 foot length of cord.

How to Make a Two Color Cobra Knot Paracord Bracelet How to Make a Two Color Cobra Knot Paracord Bracelet For quite some time I have been very interested in learning how to make stuff using paracord, such as paracord bracelets, knife lanyards, key chain fobs & more since I have been into emergency survival preparedness since 2008 and paracord is a very useful item to have on hand during an emergency or survival situation due to virtually infinite number of uses it has. As much as I was interested in making things out of paracord, I simply never made the time to learn how until very recently and after having made a little over a dozen two color cobra knot paracord bracelets, I decided to share with my readers and followers this how to article on how to make two color paracord bracelets using cobra knots. When choosing your paracord, whether buying paracord online, or in a store, make sure that the paracord you're buying is type III 550lb seven strand. Type III 550 Paracord, Side Release Buckles & More <a HREF="

News - #BBCtrending: 14 year-old's clever poem knocks Twitter backwards 27 February 2014Last updated at 15:03 ET By BBC Trending What's popular and why A poem written by a teenager has been retweeted 120,000 times. When Derek Nichols tweeted a picture of a poem written by his little brother Jordan, he was hoping to bring it to a wider audience, but was not expecting it to go viral. On Wednesday morning he wrote: "Read this... On first reading, the 25-line poem entitled Our Generation, although lucid and heartfelt, does not strike the reader as a technical achievement. Shortly after posting the poem, it began to be furiously retweeted and Nichols wrote: "My left hand is all over the internet". Meanwhile, older brother Nichols himself tried his own forwards-backwards poem (keeping his hands out of shot this time). All of the above might be true. (Actually, don't. Reporting by William Kremer All our stories are at BBC.com/trending

Slatts Rescue Belt (paracord belt upgrade) For those of you who are regular visitors to this site, you know how often I stress making 550 Paracord an essential item in your bug-out-bag, survival kit, car and so on — the more the better. Given the strength of paracord (550 lbs of tensile strength) and its many applications (tiedowns, lashings, shelter building, friction fire making, fishing line and nets, splints, repairing equipment, tooth floss and many more) it’s one of those things you should never leave home without. In my article on How to Put Together a Survival Kit I talk about my three-tiered survival kit system, with the first tier being what you always have on your person. Part of my first tier is the paracord bracelet that I wear. My Journey to Find the Ultimate Paracord Belt Originally I had posted an article about the first paracord belt that I made. At that time I began looking for other belt ideas. How to Make the Slatt’s Rescue Belt The stitch, while it may appear complicated, is actually quite easy to do.

Animated Knots Tutorials By Grog How To Make A Paracord Leatherman Pouch For best results use genuine 550 Paracord. I purchase mine from supplycaptain. As with anything in life you get what you pay for, if you want your pouch to last a long time you want to have the best cord available and with suplycaptain they guarantee the quality and authenticity of their cord. Many online retailers sell similar looking but poor quality cord with no guarantees on the durability ofthe cord. 1. Approximately 30 feet of 550 Paracord, any colour you like. 2. 3. 4. 5. 6. 7.

It's interesting how much people expound on the lanyards in the DIY community...loving it thus far! If anyone is looking for additional info, this site got my started to this!