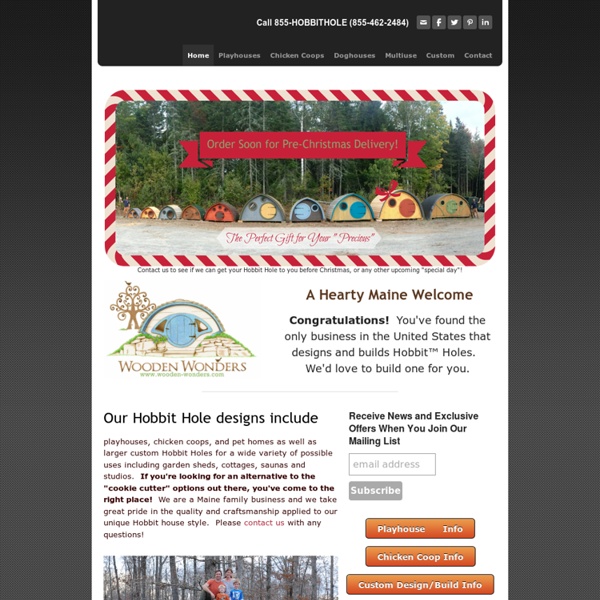 Guy Turns 700 Year Old Abandoned Cave Dwelling Into Vacation Home The Rockhouse is a unique luxury cave retreat, hand sculpted from a Triassic sandstone escarpment near the Wyre Forest in rural Worcestershire. Set in 3 acres of woodland on the banks of Honey Brook, The Rockhouse has been occupied for over 700 years. When the site was deserted in 1962 it reverted back to its ‘natural state’ – until it was painstakingly and sympathetically refurbished in 2015 ‘almost single handedly’ by enthusiast and owner Angelo Mastropietro. Check out the Rockhouse below along with an interview with Angelo in a video segment by Barcroft TV. As much a sculpture as it is a dwelling, The Rockhouse has been carefully planned out and features stylish creature comforts such as under floor heating, rainforest shower and clever ambient lighting for a nurturing and natural ambience. The holiday retreat is currently available for rent through Airbnb or direct via their website.

A 3-D Printed House? Well, this may well be the coolest video you see today. It’s a TEDx talk from a fellow named Behrokh Khoshnevis, who is a professor of engineering at USC, where he directs something called the Center for Rapid Automated Fabrication Technologies. CRAFT has stated as its grand challenge “building a custom-designed house in a day while drastically reducing the costs, injuries, waste and environmental impact associated with traditional construction techniques.” The applications of such rapid-fire housing are endless: affordable housing for the poor; “extraterrestrial buildings constructed from in situ materials”; emergency FEMA-style housing, and the like. But don’t listen to me–listen to the guy who’s trying to make it a reality. If you’re short on time and want to focus on the tech, hop ahead towards the 4-minute mark. And if you’re really pressed for time, let me call out some of the most exciting things the professor says here, with a few little glosses of my own. Bur wait?

Build This Cozy Cabin Rays of early-morning sunlight gently peek through the windows, easing you awake. Looking down from the sleeping loft, you see everything you need: a pine table; a box piled with hardwood, split and ready for the woodstove; and a compact kitchen in the corner. This is the cabin dream. In this article, I’ll show you how to build a 14-by-20-foot cozy cabin featuring a sleeping loft over the porch for about $4,000. Who can resist it? My own cabin adventure began in 1986, when I built one as an inexpensive place to stay while constructing my house — that’s when I began learning what makes cabin design and construction successful. What follows is a cabin plan (I've included a full Cabin Assembly Diagram) with the hands-on know-how I wish I had 20 years ago. I believe in building for the long haul. A Firm Foundation Every well-built structure begins with the foundation. The best way to mark your foundation outline is with 12-inch spikes pushed into the earth and connected with nylon string.

"Earthship Biotecture": Renegade New Mexico Architect’s Radical Approach to Sustainable Living Guests Michael Reynolds creator of radically sustainable living options through a process called "Earthship Biotecture." This is viewer supported news Donate New Mexico residents are trying to a break free from Los Alamos’ nuclear legacy by creating more environmentally sound ways of living. This is a rush transcript. AMY GOODMAN: We’re broadcasting from Los Alamos, New Mexico, the birthplace of the Nuclear Age. We turn right now to Mike Reynolds. We were driving along—from Durango, Colorado, to Taos, New Mexico, when we saw this remarkable collection, a fascinating collection, of structures scattered through the sage brush along the road. MICHAEL REYNOLDS: Greenhouse, which is a buffer zone for the house, to make the house stay warmer, hold its heat longer. AMY GOODMAN: So the house is a jungle? MICHAEL REYNOLDS: Yeah, it’s pretty much, mostly, 50 percent, a jungle. AMY GOODMAN: And what is in—what is in these pillars of the house? AMY GOODMAN: And what are these materials, though?

Green Egg House Images credit Zhao Kang Rents in Beijing are high, so designer Daihai Fei built himself a wonderful little green home that may well become a new icon for the Tiny House Movement.Tipster Spooky writes: Daihai Fei built his amazing egg-house on a bamboo frame, covered with various insulating materials, and topped with a layer of stitched bag. The bags themselves are filled with sawdust and grass seeds, which he sprays with water regularly, to help the grass grow faster. It looks quite comfy, and it is parked right across the street from where he works so that he saves on time and transit. I am not certain what keeps the water out; burlap bags do not exactly work like shingles. The solar panel is nicely integrated into the roof. More at Oddity CentralMore on Tiny Houses:Tiny Homes: The Next Little ThingTumbleweed Tiny House CompanyIt's a Small House After All

13 More Modern, Mobile & Modular Tiny House Designs Could you live in 200 square feet or less? For most people, the answer to that question is an emphatic no – but perhaps that’s because you’ve never seen some of the amazingly imaginative, well-designed tiny houses that are popping up around the world. Tiny houses can be mobile (including awesome converted house trucks) or stationary, plugged in or off-grid, pre-fabricated or built on-site. Some are ultramodern while others are decidedly rustic, and though a few are just part-time retreats, many shelter occupants year-round. Fab Lab House: Small and Modern (images via: fablabhouse.com) Far from a shed-like tiny house, this imaginative home that was designed to ‘act like a tree’ won the Solar Decathlon Europe people’s choice award for both looks and sustainability. Tiny Green-Roofed Egg House in China (images via: treehugger) A Chinese student lives in a tiny egg-shaped house made of a bamboo frame and inspired by the grass-covered domes of Norway. Solar Powered Cube House Hyette Tiny House

Dilapidated 1860s Barn Gets Revived Into Amazing Entertainment Space When their clients told him they wanted a barn on their property to compliment their 19th-century farmhouse and serve as their guesthouse and entertainment space, architect Douglas VanderHorn started the search process immediately. VanderHorn found this barn outside Albany, New York, via Heritage Restorations, a firm that scouts barns in disrepair for rehabilitation and reuse. According to Houzz, the timbers were already numbered and coded, as that was part of the original construction in the 1860s, when the barn was built. This made it easy to keep things organized during dismantling and rebuilding. The wood was tented and fumigated to get rid of any insects before builders began to put the barn back together. As part of the renovations, they replaced the barn’s original siding with fir reclaimed from another barn that was in better shape, and repurposed it elsewhere in the project. Below you can see some interior shots of the incredible transformation.

Electric Camper: Tiny Geometric House on Wheels Not only is this highly unusual-looking vehicle a hand-made camper – it runs on electricity. Built from plywood, fiberglass, epoxy resin, bicycle parts and an electric motor, ‘Golden Gate’ by San Francisco artist Jay Nelson is reminiscent of all of those amazing hand-crafted house trucks from the 1970s, but with a very modern power source. The tiny camper measures just 96″x54″x64″, making it just large enough inside to lay down on the bed platform. By day, that platform also serves as the driver’s seat. There are no conventional gas and brake pedals here – the driver uses controls on the steering wheel to operate the vehicle. The Golden Gate is better equipped than you might expect, with a sink, stove, cooler, storage compartments and even a toilet. While its top speed of 20mph and lack of headlights doesn’t exactly make it ideal for traveling long distances, it’s easy to envision owning a tiny house like this for use as a swanky home base for camping.

US Government Declaring All Out War on Tiny House Living Isaac Davis, StaffWaking Times Freedom in the United States today is a moving target, and when the government catches wind of an innovation that makes life easier and more affordable for ordinary people, it always steps in to take control. Take, for example, the growing effort to outlaw offgrid living in the U.S., as well as moves by local governments around the country to criminalize private rainwater collection. Now, the federal government is making a major move against the tiny house movement, seeking to give the U.S. Department of Housing and Urban Development (HUD) authority to require tiny houses to conform to the standards of recreational vehicles (RV’s), of which one of the rules is that the vehicles may not be used or marketed for permanent living. The tiny house movement is one of the latest innovations in personal freedom from an overly consumeristic and a debt-driven society. READ: Tiny Houses – Taking On the Matrix of Consumerism How can you affect the outcome?

We The Tiny House People This is journey into the tiny homes of people searching for simplicity, self-sufficiency, minimalism and happiness by creating shelter in caves, converted garages, trailers, tool sheds, river boats and former pigeon coops. Basically, Dirksen made a documentary on people living in tiny houses. For around five years she was traveling the world and filming these segments. Kirsten Dirksen is co-founder of faircompanies.com and a Huffington Post blogger. She has worked for MTV, Oxygen, The Travel Channel and Sundance Channel. From the author: I still live in a relatively spacious 1000 square foot apartment with my family of 4 (soon-to-be 5) and I’m not looking to downsize, but I can’t get enough of these tiny homes. I continue to be impressed by how so many Tiny House People have been able to let go of their stuff and not despite, but because of this, find a certain calm. Watch the full documentary now

This Transformable 309 sq ft Smart Home has Way More Than Meets the Eye Hong Kong-based architects LAAB have just completed an incredible home that maximizes every inch of this 309 sq ft (28.7 sq m) flat in Hong Kong’s Central district. The clients had a long wish list that included: full kitchen, bathtub, home cinema, gym, storage—and cat-friendly features for their three furry roommates. After 40 iterations, LAAB came up with a solution that is both functional and elegant. Hong Kong is one of the world’s most expensive cities where an average square foot costs about US$1,416 [source]. To realise their ambitious plans, the team at LAAB had to think beyond static spaces. The “Form Follows Time” philosophy is best demonstrated by the bathtub area of the apartment. 1. The apartment was not only designed for Michelle and Andy but also for their three cats, Banoffee, Dumpling and Tuxedo. A range of app-controlled smart home technologies have also been implemented, primarily Philips Hue bulbs and the August smart lock.

Do-It-Yourself Downsizing What It's Actually Like To Buy A $500 House In Detroit 7 Of The World's Best Nano Houses Studio-apartment dwellers may feel reasonably content living a small-scale existence. But if transplanted in the country, how many would opt for a similarly sized house? Driven by a commitment to reduce energy consumption and built space, there’s a growing trend among the eco-conscious to build tiny homes. A new book, Nano House by Phyllis Richardson (Thames & Hudson), gathers 40 of the best-designed examples from around the world--all of which showcase an appreciation for the efficient use of space, materials, and resources. Will they inspire “real housewives” of Beverly Hills to abandon their McMansions, short of a foreclosure notice? Not very likely. Check out the slideshow of 7 houses from the book.