Healing Frequencies That Boost Your Spirit, Mind And Body 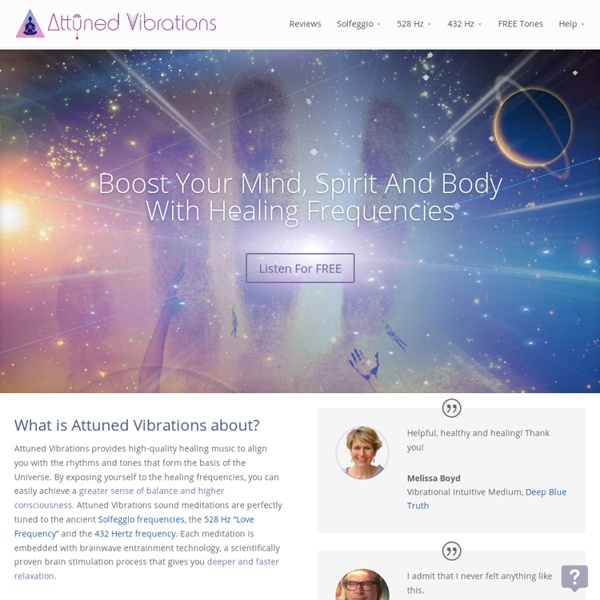 Solfeggio Frequencies : SolAwakening Vibration is everything. And every vibration has its own frequency. By exposing the mind and body to the Solfeggio frequencies, you can easily achieve a greater sense of balance and deep healing. The Solfeggio frequencies align you with the rhythms and tones that form the basis of the Universe. Breathing: Three Exercises "Practicing regular, mindful breathing can be calming and energizing and can even help with stress-related health problems ranging from panic attacks to digestive disorders." Andrew Weil, M.D. Since breathing is something we can control and regulate, it is a useful tool for achieving a relaxed and clear state of mind. 8 Ways To Strengthen Your Auric Field! You are continuously receiving information from your environment, not only through your five senses, but also through your auric field! You are able to perceive when someone is staring at you without seeing them, you can sense how somebody is feeling despite a facade, and you find some people to be energizing while others might be draining. Your aura is an extension of you. It is the energy field that surrounds your body. Many ancient cultures believe that illness first starts because of a weakness in the aura. Maintaining your auric field cleansed, strong and complete, will bring optimal health and wellbeing to you!

Cleansing Crystals Will Create Positive Energy Within Them Why Should You Cleanse Your Crystals? Cleansing crystals regularly is necessary as they will absorb negative energy. It is likely that your crystals may absorb vibrations not only from you ... but from anything in the environment where they are located. To create positive energy within your crystals... you need to cleanse them frequently. NEGATIVE ENERGY CLEANSING Free Weekly Syndicated Advice Columns Published Every Wednesday Afternoon (PST) Question: "The question that I have deals with negative auras. I have recently been to a few psychics in the New York area and all have informed me that I have a 'negative aura'. I started to question many events that have occurred in my life - especially romantic relationships. All the psychics were in agreement that this is the reason why I have not found love, or love has been slipping away from me.

The Ancient Solfeggio Frequencies Part 1: Introduction and HistoryMusic and sound can be a very powerful transformational tool for the human body and soul. However, information has come to light in recent years that our modern day musical scale has been robbed of its vast potential for healing and transformation, and there was once an even more powerful, time-honored tonal scale known as, the “original Solfeggio frequencies.” These original Solfeggio frequencies, still have the capacity to transform your life in miraculous ways. Their origins date back to ancient times when they were sung in the Gregorian chants during religious ceremonies in churches of that time. But mysteriously, around 1050 AD, they mysteriously disappeared, presumably lost forever. These chants contained special tones or frequencies which, when sung in harmony, and in Latin, were believed to impart tremendous spiritual blessings during religious masses.

Practice When it Doesn't Count Two groups of Spiritual Warriors found themselves in a very real and important dilemma. They understood their personal spiritual missions and recognized that energy existed that could prevent them from completing their work. They asked the Creator for the tools they needed, and each warrior received the package as requested. The Smudging Ceremony Our Native elders have taught us that before a person can be healed or heal another, one must be cleansed of any bad feelings, negative thoughts, bad spirits or negative energy - cleansed both physically and spiritually. This helps the healing to come through in a clear way, without being distorted or sidetracked by negative "stuff" in either the healer or the client. The elders say that all ceremonies, tribal or private, must be entered into with a good heart so that we can pray, sing, and walk in a sacred manner, and be helped by the spirits to enter the sacred realm.

Aura - Learn to see your Aura image with your own eyes What is the Aura ?Everything in the Universe seems to be just a vibration. Every atom, every part of an atom, every electron, every elementary “particle”, even our thoughts and consciousness are just vibrations. Hence, we may define the Aura as a electro-photonic vibration response of an object to some external excitation (such as an ambient light for example).

Related:  wickedrosez
Related:  Solfeggio   -  Auras & Energy   -  Esotericism   -  More New Age   -  Ypresian age   -  new age   -  Love in the digital age   -  Age   -  Christianity - Wikipedia, the free encyclopedia   -  Welcome to the World of Playing Cards - The World of Playing Cards   -  Old Kingdom of Egypt - Wikipedia, the free encyclopedia   -  Minimalissimo – Minimalism in Design   -  The Book of THOTH - The complete guide to the Tarot, Magick and the Occult   -  Tree of life (Kabbalah) - Wikipedia, the free encyclopedia   -  Secret Teachings of All Ages: The Pythagorean Theory of Music and Color   -  Assyria - Wikipedia, the free encyclopedia   -  Explorations of the Mind: Intuition - YouTube   -  Aura - Learn to see your Aura image with your own eyes   -  MYSTICMAMMA.COM : consciousness, spirituality, astrology, wisdom, inspiration | MYSTIC MAMMA™ The motherhub of cosmic downloads and energetic news new   -  BBC - History - Ancient History in depth: Viking Quest   -  KYMATICA - FULL LENGTH MOVIE - Expand Your Consciousness - YouTube   -  KONY 2012 on Vimeo   -  Guest post: Joseph Kony is not in Uganda (and other complicated things)   -  » Maintenance Mode   -  Banned Websites Awareness Day   -  The Death of Postmodernism And Beyond | Issue 58 | Philosophy Now   -  Awwwards Sites Of The Month   -  Inner Worlds, Outer Worlds Movie   -  Resonance - Beings of Frequency (documentary film) - YouTube   -  Decalcify Your Pineal Gland! A guided meditation to unblock your Ajna Chakra, Third Eye. Sudevi - YouTube   -  Zeitgeist 2012 – Google   -  Mind Science Kept Hidden Documentary.WE ARE VIBRATIONAL BEINGS.Law of attraction/vibes - YouTube   -  98.7% Proven Meditation Technique - Open Your Third Eye in 15 Minutes - YouTube   -  I’m still here: back online after a year without the internet   -  Buddhism   -  The Banality of ‘Don’t Be Evil’ by Julian Assange   -  How to Create a Lifelong Brotherhood   -  Explorers Maps, Activities, Biographies and More for Kids «   -  How to Clear Negative Energy With Sage & Salt | eHow   -  Hands on History - Ancient Britain: Activities for Families and Groups   -  What is Consciousness?   -  Kids can't use computers... and this is why it should worry you - Coding 2 Learn