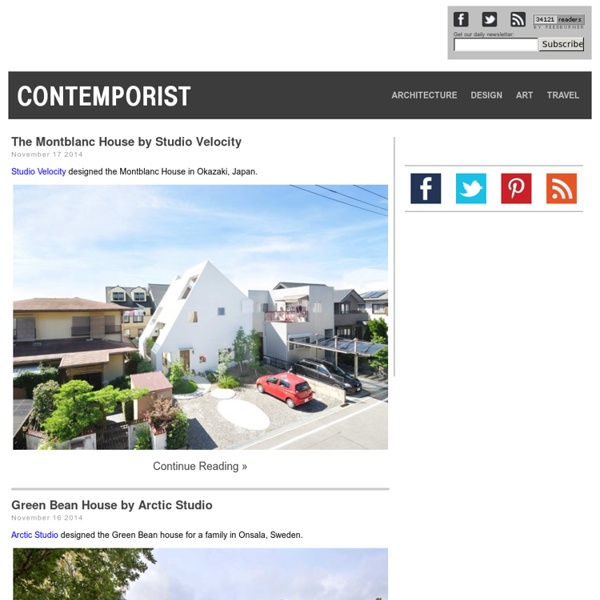 Fieldwork Design & Architecture have collaborated with the Nike Workplace Brand Design group to design some feature walls for the NIKE expansion buildings. The wall is constructed of salvaged maple gym flooring, and creates a branded, meaningful statement of arrival at the office in Beaverton, Oregon. Continue Reading »

Architecture Wallpaper* newsletter Register for our bi-weekly bulletin of the stuff that refines you By submitting your details, you'll also receive emails from Time Inc. UK, publisher of Wallpaper* and other iconic brands about its goods and services, and those of its carefully selected third parties. Shimogamo House by Edward Suzuki Associates Edward Suzuki Associates have designed the Shimogamo House in Kyoto, Japan. Shimogamo House by Edward Suzuki Architects “To be able to see green from every room”—such was all that the client requested. Dezeen UK designers David Ben Grünberg and Daniel Woolfson have devised a concept for a shape-shifting house that morphs to deal with changing times of day, seasons and weather conditions (+ movie). Woolfson and Grünberg launched The D*Haus Company to develop the concept for the experimental house, which would fold into different configurations so that it can take on up to eight different shapes. The house was first conceived as part of Grünberg's graduation project. "It was originally devised as a home for Lapland to deal with extreme temperatures," Woolfson told Dezeen. "Not many people know it, but they have warm summers and also really cold winters." He went on to explain how they've since developed the concept so that the house could be used anywhere in the world.

Empowering Architecture: architects, buildings, interior design, materials, jobs, competitions, design schools TV Screen Cantilevers That Dominated the Mid-Oughts Some people say that it takes 20 years for something to become vintage, or for a cultural phenomenon to evolve into irony. Take, for instance, the impending resurgence of JNCO jeans, the preferred denim of '90s raver kids. Architecture architecture Renzo Piano piece by piece The “Barbara Cappochin” International Architecture Biennale mounts an exhibition on the Genoese architect in Padua The Pritzker Prize to Shigeru Ban "I see this prize as encouragement for me to grow" ﻿﻿﻿Copenhagen Architecture Festival x FILM

ArchDaily the best of Architecture Nestled among the Forest Hill neighborhood in Toronto, Paul Raff Studio‘s latest sustainable residence is “a marriage of environmentally responsible building strategies and elegant architectural composition.” The 353m2 residence, entitled the Cascade House, is designed in an I-formation around an outdoor swimming pool and offers a high quality of aesthetics in addition to environmentally friendly strategies. More about the home after the break. ”The design is shaped around the concept of making visible the architecture as interface between habitation and landscape,” explained the architect. archidose A couple weeks ago I featured The Boxwood Winery by Hugh Newell Jacobsen on my weekly page, the fifth of such a building type that I've featured. Boxwood and thefourotherprojects are a varied mix that illustrates the relative freedom given architects for a fairly new building type that sits somewhere between the pastoral and the commercial. The Novelty Hill-Januik Winery in Woodinville, Washington by Seattle's Mithun is another notable winery that balances building and landscape to "celebrate wine's agrarian roots." The building itself is a balance of expansive, industrial concrete surfaces, soft woods and large glazed areas that make the winery an inviting location that doesn't gloss over its industrial context (the building sits between two railroad lines and just south of numerous large industrial buildings) or the industrial mechanisms that make large-scale winemaking possible.

ArchDaily the best of Architecture The Big Dig House by Single Speed Design reutilizes materials from the Big Dig. In that aspect, it´s a remarkable example of recycling in architecture. Project description by the architects after the break. Worldarchitecturenews This exquisite market hall in Ghent, Belgium is the work of a partnership between Robbrecht en Daem Architecten and Marie-Jose Van Hee Architecten. The barbed structure spikes across a 24,000 sq m site formerly home to a desolate parking lot in the centre of Ghent, commanding the space between the spires of St Nicholas Church, the Belfry and a Cathedral. Designed to encourage local residents to convene in the market square for social gatherings and public events, the pavilion above ground marks the location of the brasserie, bicycle park and public toilets below ground, accessible through a new lower ‘green’.