The Ethics of Digital Manipulation 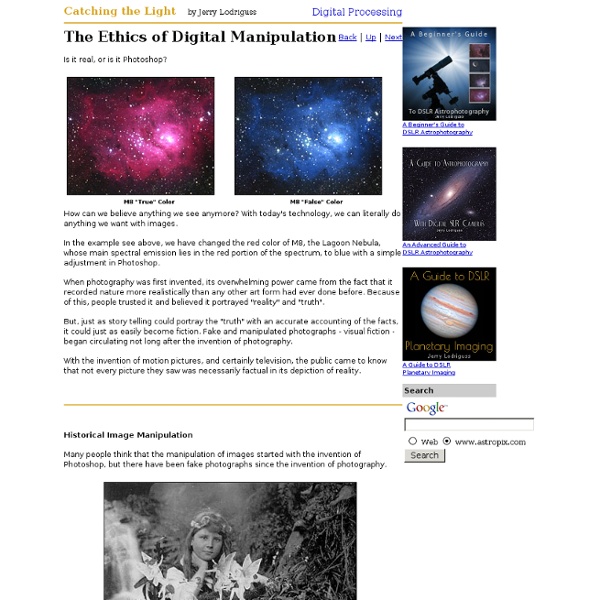 In the example see above, we have changed the red color of M8, the Lagoon Nebula, whose main spectral emission lies in the red portion of the spectrum, to blue with a simple adjustment in Photoshop. When photography was first invented, its overwhelming power came from the fact that it recorded nature more realistically than any other art form had ever done before. Because of this, people trusted it and believed it portrayed "reality" and "truth". But, just as story telling could portray the "truth" with an accurate accounting of the facts, it could just as easily become fiction. Fake and manipulated photographs - visual fiction - began circulating not long after the invention of photography. With the invention of motion pictures, and certainly television, the public came to know that not every picture they saw was necessarily factual in its depiction of reality. Historical Image Manipulation Ethics and Aesthetics Today's viewers however, are very sophisticated visually. Interpretations Related:  more photoshop

16 Famous Photoshopped Images Throughout History President Abraham Lincoln, circa 1860 This nearly iconic portrait of U.S. President Abraham Lincoln is a composite of Lincoln’s head and the Southern politician John Calhoun’s body. Putting the date of this image into context, note that the first permanent photographic image was created in 1826 and the Eastman Dry Plate Company (later to become Eastman Kodak) was created in 1881. Stalin, circa 1930 Stalin routinely air-brushed his enemies out of photographs. Benito Mussolini, 1942 In order to create a more heroic portrait of himself, Benito Mussolini had the horse handler removed from the original photograph. Altered Photo Original Photo U.S. In 1960 the U.S. Fidel Castro, 1968 When in the summer of 1968 Fidel Castro (right) approves of the Soviet intervention in Czechoslovakia, Carlos Franqui (middle) cuts off relations with the regime and goes into exile in Italy. The German Chancellor, September 1971 Altered in the News Paper Oprah Winfrey, August 1989

Ethical Inquiry: August 2012 Seventeen Magazine's "Body Peace Treaty" as reprinted by the New York Times The Ethics of Digital Photo Manipulation: Alterations in Pursuit of “Beauty” Alteration of images has been occurring since the inception of photography. Manipulating a photo used to be an arduous process, typically involving scissors, glue, and meticulous precision. Today, virtually anyone with access to a computer can alter an image with relative ease. There are many reasons for photo manipulation, including political, as when a Soviet official was removed from a photo of Stalin after falling into disfavor, and commercial, as when a product in an advertisement is made to look more desirable to consumers (see “Who Can Improve on Nature? N.B.: For a related question, see the May 2011 Ethical Inquiry “Is Ethnic Modification Surgery Ethical?” Critiques Medical Implications In Philly.com’s Health section Johnathan Purtle critiques Photoshop’s slimming techniques on medical grounds. The modified images are misleading

giraffic-design   PSD I love a lady with a good head on her shoulders, but not enough people appreciate how that head is attached. Someone probably told this model to keep her chin up and she took it a (vertical) step too far. Hopefully she can keep her head above the haters. Thanks Mary. You can see the original on the Kohl’s site. Reuters Photo Fraud The Reuters Photo Scandal A Taxonomy of Fraud A comprehensive overview of the four types of photo fraud committed by Reuters, August, 2006 The recent discovery that the Reuters news agency released a digitally manipulated photograph as an authentic image of the bombing in Beirut has drawn attention to the important topic of bias in the media. But lost in the frenzy over one particular image is an even more devastating fact: that over the last week Reuters has been caught red-handed in an astonishing variety of journalistic frauds in the photo coverage of the war in Lebanon. This page serves as an overview of the various types of hoaxes, lies and other deceptions perpetrated by Reuters in recent days, since the details of the scandal are getting overwhelmed by a torrent of shallow mainstream media coverage that can easily confuse or mislead the viewer. The four types of photographic fraud perpetrated by Reuters photographers and editors are: 1. 2. 3. 4. 1. 2. 3. 4. Hang on! But wait!

Is this shopped? Truth, lies, and art before and after Photoshop Robert Johnson, The Art of Retouching Photographic Negatives (1930) We humans are insatiable visual gluttons, peering into the empathic peepholes of Flickr photostreams and scavenging the hyperactive junk food gestalt of Tumblr. The internet has practically trained us to gorge ourselves on a kaleidoscopic mess of images. But in the photographic community, there has long been a recurring tension around the boundaries of fact and fiction in this chaotic onslaught of aesthetics. Try as I might, I can't resist turning to that old copypasta adage which has so often graced the pages of 4chan: "This looks shopped — I can tell from some of the pixels, and from seeing quite a few shops in my time." The joke is that the saying usually follows an image that has been manipulated in some obvious and egregious way. Faking It: Manipulated Photography Before Photoshop, a new exhibit at the Metropolitan Museum of Art in New York City, reminds us that yes, we have seen quite a few 'shops in our time.

Photo Manipulation A+C AZIZ + CUCHER, Text published in Kunstforum, Winter 1996 "The Medium is not the only Message"***The Human Genome project is being touted as the greatest scientific achievement of mankind, surpassing in its significance the discoveries of Newton, Darwin, and Einstein. If biology is made to be but an exclusive function of the genetic code, then it becomes just another field in the study of communications. The current excitement about the development of the technologies of communication seems to be coated in a blind faith in progress that is just as naive as that which our predecessors put in nuclear power and the space age. Flooded with enthusiasm, some people believe that these technologies offer unlimited possibilities for the reconfiguration of the self, predicting even the possibility of an ontological shift in the reality of being. With advances in digital technology and robotics, bioengineering is forging the link between the natural and the artificial.

photoshop ethics AdAge Global: The True Colors of Oliviero Toscani He doesn't rule out getting back into the advertising game at some point, though he tells me the option is unappealing at the moment. But he is keeping that iron in the fire: He did appear in a testimonial ad produced by Milan's Marani/Omnimedia.com for Lorenz watches, and the local trade press carries periodic stories about him discussing possible joint projects with various agencies, though the talks have so far failed to yield any results. But the machinations of the ad industry is a subject Toscani eventually tires of, and our conversation invariably drifts back to the "Death Row" ads he says represent his best work from his 18 years at Benetton. "Most ads are forgotten immediately, and even good ads are forgotten after six months," he says. In June, the Missouri lawsuit was settled when Benetton agreed to write letters of apology to the four Missouri families whose relatives were murdered by the inmates in the ads. (By Eric J.

The Interminable, Everlasting Lincolns (Part 2) This is the third installment of a four-part series. Time Time magazine was planning to publish a commemorative issue on Lincoln. Keya Morgan, a young, successful collector, was asked to provide a copy of O-118 for the junior senator from Illinois, Barack Obama. KEYA MORGAN: He wrote a full article about my photo for Time magazine, and the editors got the date wrong. ERROL MORRIS: You mean O-118? KEYA MORGAN: Yes. ERROL MORRIS: But Obama liked the photograph? KEYA MORGAN: Obama said it was his favorite photo of all time. ERROL MORRIS: But you’re upset they got the date wrong. KEYA MORGAN: To me it’s very important to have historical accuracy. ERROL MORRIS: And you are particularly interested in the negatives — ? KEYA MORGAN: Because the negative is a direct mirror reflection of that person or animal or landmark or whatever it was that was in front of the camera, 150 years ago. ERROL MORRIS: That the negative somehow connects us to Lincoln. The composite image. As I turned the pages of “Mr.

vergirl ad banned by U.S. watchdog in first major step to restrict 'misleading' use of Photoshop in beauty campaigns By Hannah Rand Updated: 06:05 GMT, 17 December 2011 The National Advertising Division is taking further steps to restrict the use of misleading image manipulation in cosmetics ads. In a landmark move, the industry watchdog has decided to ban an ad by Covergirl for their NatureLuxe Mousse Mascara. The decision may spell the beginning of the end of highly digitally manipulated images - including those that slim down models or change body shapes in order to sell products. False claims: CoverGirl was forced to pull a mascara ad, not shown above, after admitting the model's eyelashes were digitally retouched The Proctor & Gamble ad, featuring a long-lashed brunette, claimed that the mascara could deliver '2x more volume' but in small print at the bottom of the ad it disclosed that the model's lashes had in fact been enhanced by Photoshop. The NAD has been assured that Proctor and Gamble will not run the ad again.

valtari videos the valtari mystery film experiment now available on dvd, blu-ray and download. includes 3 behind-the-scenes featurettes. valtari was sigur rós's last album as a four-piece. an elegaic work; they didn't feel much like talking about it, and so, instead, asked a bunch talented directors to make whatever they felt like making to go with music. these 16 films are the result. sad, funny, beautiful and, occasionally, plain bewildering, they represent just some of the available emotional responses to this most contemplative sigur rós album. the film's credits include thank-you's to all 800-plus entrants to the mystery film experiment competition. buy from us: downloaddvd or from retailers: the films sigur rós gave fourteen film makers the same modest budget and asked them to create whatever comes into their head when they listen to songs from the band's album valtari. the idea is to bypass the usual artistic approval process and allow people utmost creative freedom. click to watch valtari