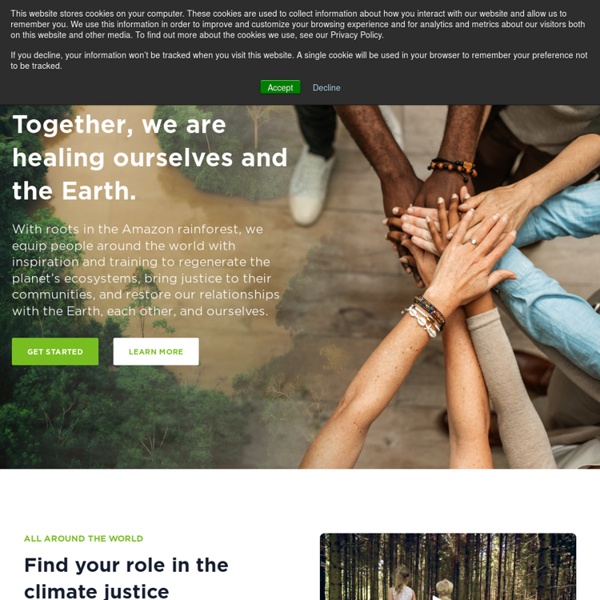 Transformative Workshops Awakening The Dreamer Transform your world through a Pachamama workshop, including our flagship Awakening the Dreamer Symposium. Explore our Workshops » Pachamama Journeys Journey to the Amazon

Wildlife & habitat Humans share the Earth with a diverse range of animals and plants — and we all depend on each other for survival. Think of the salmon that carry nutrients from the ocean to the rivers and streams where they spawn. Eagles and bears that feed on the salmon carry these nutrients into the forest. The forests provide humans with numerous services and resources, from lumber for our homes to the oxygen we breathe. They are also important in our efforts to reduce global warming.

Reencounter of the Original Peoples and Nationalities of Abya Yala in Ecuador Representatives of the original peoples and nationalities of the Americas returned to Ecuador last week for the twentieth anniversary of a historic gathering that advanced hemispheric unity. The Continental Encounter of the Original Nationalities and Peoples of Abya Yala met from June 14 to 16. Abya Yala is a word for the Americas in the language of the Kuna people in Panama that has gained broad usage as an aboriginal term for the hemisphere. New Web Platform Launched to Accelerate Green Economy Transition Geneva, 22 January 2014 - A robust, state-of-the-art knowledge-sharing platform was launched today by the newly established Green Growth Knowledge Platform (GGKP), a diverse consortium of leading institutions and organizations working in areas related to green growth and green economy. The website is in response to increasing demand from both policy makers and the public for information on ways to achieve sustainable economic growth. Like the GGKP itself, the website - which features a searchable e-library with over 600 technical and policy resources, as well as dashboards with data and policies for 193 countries - transcends the traditional divide between economy and the environment. It mobilizes knowledge, experience and support from disparate partners in both the global economic and environmental arenas, all of which share the common goal of accelerating green growth. "A transformation towards a green economy is not just about the environment.

The Blue Sweater by Jacqueline Novogratz The Blue Sweater is the inspiring personal memoir of a woman who has spent her life on a quest to understand global poverty and to find powerful new ways of tackling it. From her first stumbling efforts as a young idealist venturing forth in Africa to the creation of the trailblazing organization she runs today, Jacqueline Novogratz brings us a series of insightful stories and unforgettable characters — from women dancing in a Nairobi slum, to unwed mothers starting a bakery, to courageous survivors of the Rwandan genocide, to entrepreneurs building services for the poor against impossible odds. She shows, in ways both hilarious and heartbreaking, how traditional charity often fails, but how a new form of philanthropic investing called "patient capital" can help make people self-sufficient and change millions of lives. More than just an auto-biography or a how-to guide to tackling poverty, this book challenges us to grant dignity to the poor and to rethink our engagement with the world.

innovation in tropical forest conservation news Mongabay.com news articles on innovation in tropical forest conservation in blog format. Updated regularly. Next big idea in forest conservation? Playing games to understand what drives deforestation (06/26/2014) Dr. Claude Garcia plays games, but you won’t find him betting his shirt at the casino. ‘The last free people on the planet’ <div class="greet_block wpgb_cornered"><div class="greet_text"><div class="greet_image"><a href=" rel="nofollow"><img src=" alt="WP Greet Box icon"/></a></div>Hello there! If you are new here, you might want to <a href=" rel="nofollow"><strong>subscribe to the RSS feed</strong></a> for updates on this topic.<div style="clear:both"></div></div></div> In small pockets around the world live isolated indigenous communities, groups that, even though they have had run-ins with their neighbours or Westerners, prefer to avoid or resist any further contact. Although we sometime call them ‘uncontacted,’ a more accurate description is probably ‘voluntarily isolated’ or ‘withdrawn’ or ‘evasive.’ Many of these groups have tragic histories of encounters with outsiders — too much ‘contact’ — where they fought to preserve their isolation and, usually, came up much worse off than their more numerous intruders.

Forests worldwide threatened by drought Forests around the world are at risk of death due to widespread drought, University of Stirling researchers have found. An analysis, published in the journal Ecology Letters, suggests that forests are at risk globally from the increased frequency and severity of droughts. The study found a similar response in trees across the world, where death increases consistently with increases in drought severity. Dr Sarah Greenwood, Postdoctoral Researcher in Stirling's Faculty of Natural Sciences, said: "We can see that the death of trees caused by drought is consistent across different environments around the world.

Over 130 Renowned Scholars Call on President Correa to Defend Yasuní-ITT Amazon WatchFOR IMMEDIATE RELEASE | September 19, 2013 For more information, contact:Ivonne Yanez (in Ecuador) at +593 232 11103 or sudamerica@oilwatch.org Kevin Koenig (in Ecuador) at +593 99 794 9041 or kevin@amazonwatch.org Adam Zuckerman at +1 207 838 5806 or adam@amazonwatch.org Quito, Ecuador – This week more than 130 renowned academics and intellectuals from all over the world sent a letter to Ecuadorian President Rafael Correa. Scholars including Vandana Shiva, James Hansen, Naomi Klein, Boaventura de Souza Santos, Arturo Escobar, and Timothy Mitchell, among others, headed up the letter. Here are links to versions in Spanish and in English. The signatories wrote to support the Ecuadorian people in their fight to keep the oil under the ground in Yasuní-ITT, one of the most biodiverse places on the planet.

Sarayaku This article is about the village in Pastaza Province, Ecuador. "Sarayaku" or "Sarayacu" is a common Quechuan toponym, see e.g. Sarayacu District, Peru. Sarayaku (Quechuan: "The River of Corn"; also transcribed Sarayacu) is a territory and a village, situated by the Bobonaza River in the province of Pastaza in the southern part of the Amazonic region of Ecuador, el Oriente.

Five Easy Repairs to Extend the Lifespan of Your Things I have a dilemma—a New Year’s dilemma. At a time when resolutions dominate the season, resolutions are the one thing I dread. Every January, I make promises: Eat better; exercise more; save money. Books of the decade in ecocultural theory What books, published over the last ten years, have contributed most cogently and profoundly to our thinking about the relationship between culture and nature, ecology and society? (That’s to name just two of the dualisms this blog regularly throws into question.) Who have been the most important ecocultural theorists so far this century? And which are the most important publishers in this area? About Worldchanging "Architecture or Revolution. Revolution can be avoided." Le Corbusier, Vers une Architecture, 1923 Le Corbusier had it wrong. One billion people live in abject poverty.