No Garden? Here Are 66 Things You Can Can Grow At Home In Containers 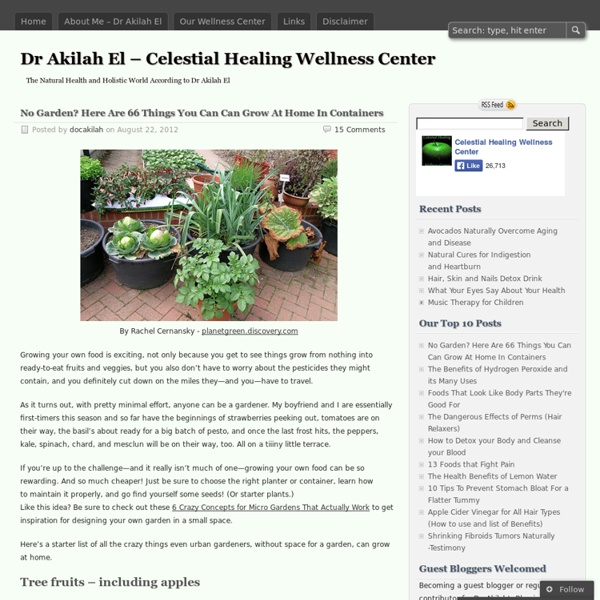 By Rachel Cernansky - planetgreen.discovery.com Growing your own food is exciting, not only because you get to see things grow from nothing into ready-to-eat fruits and veggies, but you also don’t have to worry about the pesticides they might contain, and you definitely cut down on the miles they—and you—have to travel. As it turns out, with pretty minimal effort, anyone can be a gardener. If you’re up to the challenge—and it really isn’t much of one—growing your own food can be so rewarding. Here’s a starter list of all the crazy things even urban gardeners, without space for a garden, can grow at home. Tree fruits – including apples 1. Citrus fruits Citrus trees in particular are said to be good for beginning gardeners and are easy to grow indoors, so don’t let inexperience or lack of outdoor space stop you from enjoying fresh-picked, hyper-local fruit. 10. Tropical fruits Tropical fruits can also be surprisingly easy to grow indoors, even in non-tropical climates. 15. The real surprises

How to Grow 100 Pounds of Potatoes in 4 Square Feet On many occasions, we've been tempted to grow our own potatoes. They're fairly low maintenance, can be grown in a pot or in the ground, last a fairly long time if stored properly, and can be very nutritious (high in potassium and vitamin C). Here's more incentive: according to this article, you can grow 100 pounds of potatoes in 4 sq. feet. According to this article from the Seattle Times, potatoes planted inside a box with this method can grow up to 100 pounds of potatoes in just 4 square feet. Lumber Seed potatoes Soil Careful attention to watering The Times' guide for building a potato growing box yields up to a 100 lbs. of potatoes in a mere 4 square feet is shown below: Plant as early as April or as late as August 1, with an approximated 3 month till harvest turnaround time. Here are some pointers from the article: Cut apart larger seed potatoes, making sure there are at least two eyes in each piece you plant. Seattle Times via LifeHacker.

Office of Dietary Supplements (ODS) Forest gardening History[edit] Forest gardens are probably the world's oldest form of land use and most resilient agroecosystem.[2][3] They originated in prehistoric times along jungle-clad river banks and in the wet foothills of monsoon regions. In the gradual process of families improving their immediate environment, useful tree and vine species were identified, protected and improved whilst undesirable species were eliminated. Eventually superior foreign species were selected and incorporated into the gardens.[4] Forest gardens are still common in the tropics and known by various names such as: home gardens in Kerala in South India, Nepal, Zambia, Zimbabwe and Tanzania; Kandyan forest gardens in Sri Lanka;[5] huertos familiares, the "family orchards" of Mexico; and pekarangan, the gardens of "complete design", in Java.[6] These are also called agroforests and, where the wood components are short-statured, the term shrub garden is employed. In tropical climates[edit] Americas[edit] Africa[edit]

Food Forests by Kay Baxter, PRI New Zealand (Koanga Institute) This is an update on our urban permaculture garden experiment which integrates the best ideas from our Permaculture Design Course students into a working urban garden here in our North Island, New Zealand temperate climate. Our end product includes rabbits, chickens, a 36 sq m biointensive garden,… Read more » A silk tree in my garden, serving as living trellis to arctic kiwifruit; also shade provider for shade crops including currant, mayapple, fuki, and edible hosta. Excerpted from Paradise Lot by Eric Toensmeier with contributions from Jonathan Bates. Bamboo grows in most areas and has many important uses for communities. Turmeric (Curcuma longa) can handle 5°F/-15°C. I spent the last two months in the Philippines, and had a great experience with seed planting with local kids in the neighborhood. Top left: Geoff Lawton inspects a towering Hardy Kiwi Fruit vine snaking across a number of trees.

Planting a Clock That Tracks Hours by Flowers Photo The professionals said it could not be done. They had never tried it, and they didn’t know any public garden that had tried it, and they wouldn’t recommend anyone else give it a try. This was not the response I expected when I called a few plant people and asked how to design a type of flower bed that has been around since the mid-18th century. It’s called a Horologium Florae: a flower clock. (No relation to the Apple Watch.) “Please don’t show this to my bosses,” said Marc Hachadourian, the director of the Nolen Greenhouses, a 43,000-square-foot grow facility at the New York Botanical Garden in the Bronx. He was joking. At this point, clock-watchers may want to skip ahead to the useful flowering timetable in the second half of this article. Here’s how the timepiece works. Who needs a watch when the flowers know the time? Like so many botanical concepts, the flower clock originated with the Swedish ur-taxonomist Carl Linnaeus, in his 1751 treatise “Philosophia Botanica.” Mr. Ms.