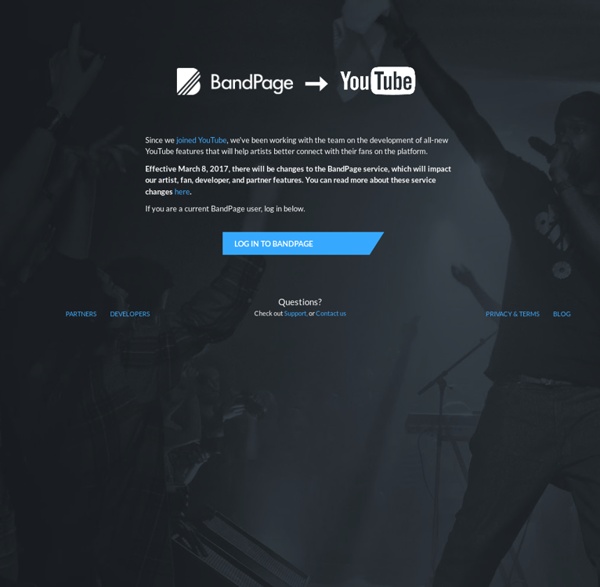 4 Promising Curation Tools That Help Make Sense of the Web Steven Rosenbaum is a curator, author, filmmaker and entrepreneur. He is the CEO of Magnify.net, a real-time video curation engine for publishers, brands, and websites. His book Curation Nation is slated to be published this spring by McGrawHill Business. As the volume of content swirling around the web continues to grow, we're finding ourselves drowning in a deluge of data. Reed Ghazala and Circuit Sound Artists in Videos, as NYC’s Bent Festival Gets Underway Circuit bending has a reputation as involving far-out, unstructured experimental noise, of real violence and distortion done to instruments. And there’s probably a place for that. But Reed Ghazala, circuit bending’s spiritual father and electronic practitioner, takes a more organic, evolutionary approach. Reed recently told me about his favorite application of his iPad, apart from exploring new experimental soundscapes with tools like the brilliant granular app Curtis. He brings it with him into the forest, using GPS for location, and tracking plants and animals, identifying the sounds of bird and beasts.

Amplifying Your DJ Web Presence in 2012 As a digital DJ or electronic music producer, a well-curated internet presence can seal the deal when booking gigs, getting fans and friends out to your events, or putting your original tracks into headphones around the world. Today, we focus on some of the best tools and practices out there for maximizing your time online in 2012. Most active performing DJs and producers already have a web presence somewhere online. Bands and Musicians: How to Get on Facebook Music If you’ve been on Facebook lately (and we know you have), no doubt you’ve noticed that what your friends are listening to shows up in your ticker. Obviously, it’s a great opportunity for artists to get their music heard on the world’s biggest social network. But how do you get on there, exactly?

18 Free Wikipedia Tools For Better Research Wikipedia is an ocean of information where one can easily get lost. We have selected 18 really awesome tools that will allow you to get more out of wikipedia and utilize it in a more productive manner. All these tools are completely free:

DJing in Ableton: How To Warp Tracks with Drifting Tempo In the first part of our series on how to get started DJing in Ableton Live, we took a look at the possibilities opened up by Live for DJs and learned how to warp an electronic dance track with a steady tempo. But not every track you’ll want to work into your sets will be as simple as that – what happens when you have a live drummer or a track with serious tempo changes? Here, we look into warping more “difficult” songs with a non-constant tempo. As we’ve noted in the past, most current club tracks produced on modern DAWs, whether house, techno, dubstep, electro or hip-hop, are based on tightly quantized drum patterns. These songs will have a pretty much constant tempo all throughout, with minimal drift. Warping these tracks is very easy, and in many cases, will only require you to set 2-4 Warp Markers to have the song ready for a DJ set.

17 Ways Bands Should Use Email to Grow Their Fan Base and Sales Your relationship with your fans has never been more important. They hold the money and are the ones that want to buy directly from you. They love your music and are whom you need to develop an intimate relationship with if you want your band’s career to grow. If used right Email and Email management is a powerful tool to make that fan relationship grow. Email can be used in a range of ways such as a personalized message to give them an update on your band or a call for action to buy something from you. We have put together what we believe are the 17 best ways to use Email to connect with and grow your fan base and sales. 7 Alternatives to Pandora and Last.FM Whether you are annoyed by the ads on Pandora, the limited number of skips, or the abyss of cruel 30-second song teasers from Last.FM, many online listeners are growing weary of mainstream methods of hearing new music. While the Pandora algorithm is strong, and the Last.FM related artists tool is pretty useful, don’t fool yourself in to thinking that there aren’t other great ways to expose yourself to new music in the depths of cyberspace. Here are 7 alternatives to Pandora and Last.FM that will infuse your day with an uninterrupted stream of music that large record companies haven’t managed to squash under their thumbs yet. StumbleAudio StumbleAudio has a killer recommendation engine that works better for me than Pandora’s. Instead of “genomes”, StumbleAudio uses listeners’ favoritism as well as buying pattern data from online music stores to make suggestions.

4 Time Saving Content Curation Tools Content curation services, which had been one of the choice tools of marketing experts for some time now, are finally entering the mainstream. Some research done by the guys over at LikeHack showed that this service is now often used not by marketing consultants but by ordinary people. This is due to information overload and the rising need for content filtering. Top 10 Ways to Discover New Music Most of my life I have strived to find new and interesting music, but I am often far too busy to really dig deep and find new artists everyday. Now that I am done with college and have a real job, I find that I have even less time to find new music or even stay up to date with all of the new bands. I have, however, found some great resources that keep me in the loop with minimal time and effort. Pandora

Book Review: Beyond Beatmatching – Take Your DJ Career to the Next Level Sure you know how to use a mixer, match beats, and program a seamless, bumping DJ set that’s guaranteed to rock the house. But have you ever considered how the 17th century circle of fifths relates to throwing down on the decks? Well two people who have are Yakov Vorobyev and Eric Coomes, co-authors of Beyond Beatmatching, a new eBook about the technique and business of DJing. The book was put out by the creators of the DJ software program Mixed In Key. Mixed in Key is a software solution designed to aid in harmonic mixing. Even if you’re unfamiliar with the term “harmonic mixing,” the odds are, you’re familiar with the technique. 3 Ways to Use YouTube to Drive Traffic to Your Website Are you wondering how to get people from YouTube to your website? Are you looking for ideas to move people from watchers to clickers? Keep reading to learn how.