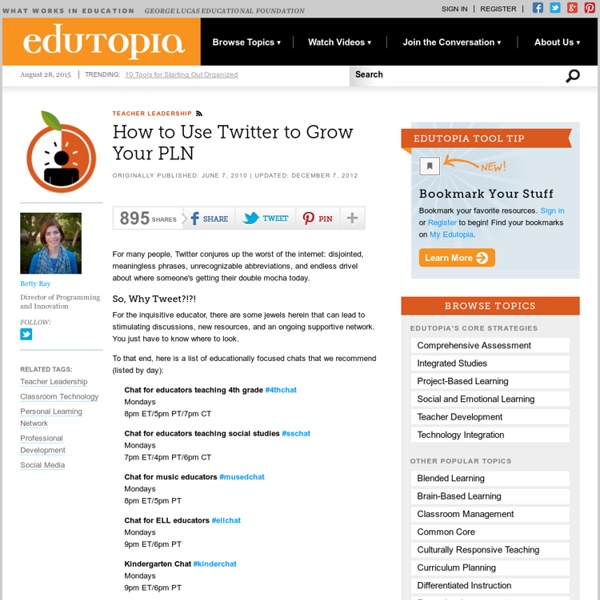 20 Tips for Creating a Professional Learning Network - Getting Smart “20 Tips for Creating a Professional Learning Network” by Miriam Clifford first appeared on the InfomED blog. Networking is a prime form of 21st century learning. The world is much smaller thanks to technology. Learning is transforming into a globally collaborative enterprise. Take for example scientists; professional networks allow the scientific community to share discoveries much faster. Just this month, a tech news article showcased how Harvard scientists are considering that “sharing discoveries is more efficient and honorable than patenting them.”

3 Tools to Turn your Tweets into A Newspaper Creating e-magazines and newspaper is no longer a job of only high tech guys but anyone with the rudimentary knowledge of internet surfing can now set up and run his/her own e-magazine in a matter of minutes. You want a proof ? check out these tools we have previously posted for teachers and that let them create newspapers for their students. How about creating a magazine from the tweets you share on Twitter and also from what your followers share ? Building The Basics of Personalized Professional Learning (Part I) Personalization is hard--but not for the reasons that you may be thinking. Choosing the right content and software is daunting. Creating adaptive paths for learning is extremely complex. Developing sets of competencies for your learners is an arduous task.

How do we deal with unwilling corporate learners? Recently Brent Schlenker returned to blogging after a year back in the corporate training world, and he talked about some of his experiences. At the end of his post he made an interesting – if not depressing – statement. “The truth is, there are no learning problems in corporate settings. Training Secrets From Inside The Googleplex Anyone who’s tried to keep up with the online ad business, especially lately, knows it’s a turbulent tumble of ever-changing products—search, display, video, mobile—with vastly different sets of advantages and potential payoffs. So imagine being one of the poor Google sales agents tasked with keeping up with the company’s dozens of offerings. Its thousands of agents don’t have to master one or two products, but every single one.

The Missing Link in School Reform In trying to improve American public schools, educators, policymakers, and philanthropists are overselling the role of the highly skilled individual teacher and undervaluing the benefits that come from teacher collaborations that strengthen skills, competence, and a school's overall social capital. (Illustration by Brian Stauffer) In Waiting for Superman, the 2010 documentary that describes the failure of American public education, several children and their families, along with educators like Geoffrey Canada and philanthropists like Bill Gates, drive home the argument that the key to school reform lies in improving the competence and skills of individual teachers.

Twitter Tips: How to Filter the Noise Once you start following a good number of people, you may find that it’s difficult to keep up with your Twitter feed, as there are so many tweets happening all at once. Rarely can someone read all the tweets of several hundred or even thousands of people all at once. There is just too much “noise” happening. 10 Characteristics of Great School Cultures - Getting Smart Profiling great schools and conversations with effective school leaders leads to one overarching conclusion–culture is key. A powerful culture makes teachers better and kids smarter. Yet “Culture is one of those things that all organizations say is important, but it is easily ignored or forgotten in the daily grind of running a business, non-profit, or school district,” said a recent HBR article. Our summer homework helped us identify the following 10 key ingredients of a high performance culture: Values: “We’re a values first organization,” said Kurtz of DSST Public Schools . “Each human being strives to be fully known and affirmed for who they are, and to contribute something significant to the human story.”

Introduction to Edcamp: A New Conference Model Built on Collaboration Editor's Note: Blogger Mary Beth Hertz was one of the organizers of Edcamp Philly, a free education "unconference" that took place in Philadelphia last May. The event attracted the attention of educators from around the world--not only for the excellent content and collaborative spirit, but also for the unconference model itself -- one that costs next to nothing to produce by facilitating ad-hoc community participation. Since then, groups of educators around the world have begun to organize local edcamps in their areas. In this four-part series, Ms.