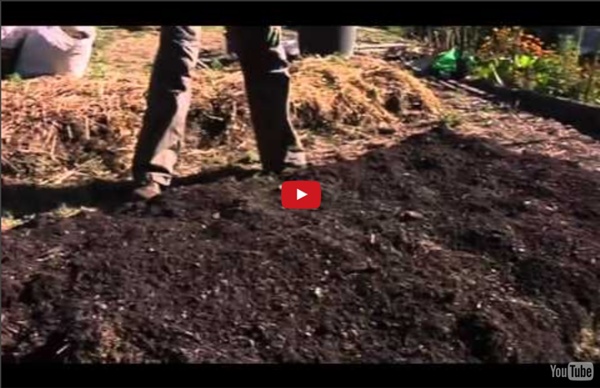 Farming Without Water By Brie MazurekOriginally published by The Center for Urban Education about Sustainable Agriculture Little Organic Farm, Marin, CA This week, as the nation grapples with the worst drought in decades, the USDA added more than 218 counties to its list of natural disaster areas, bringing the total to 1,584 — more than half of all U.S. counties. No-dig gardening No-dig gardening is a non-cultivation method used by some organic gardeners. The origins of no-dig gardening are unclear, and may be based on pre-industrial or nineteenth-century farming techniques.[1] Masanobu Fukuoka started his pioneering research work in this domain in 1938, and began publishing in the 1970s his Fukuokan philosophy of "Do Nothing Farming", which is now acknowledged by some as the tap root of the Permaculture movement.[2] Two pioneers of the method in the twentieth century included F. C. King, Head Gardener at Levens Hall, South Westmorland, in the Lake District of England, who wrote the book "Is Digging Necessary?" in 1946 and a gardener from Middlecliffe in the UK, A.

7 No-Cost Ways to Grow More Food From Your Garden When I wrote a post about products that help promote soil biodiversity, some commenters were skeptical about commercial products that are shipped long distances with all the packaging and waste that goes with them. They may have a point. After all, the secrets of healthy soil usually start at home. And many of them are free. Here are some of our favorites normanack/CC BY 2.0 5 Secrets to a ‘No-work’ Garden It took over 20 years of gardening to realize that I didn’t have to work so hard to achieve a fruitful harvest. As the limitless energy of my youth gradually gave way to the physical realities of mid-life, the slow accretion of experience eventually led to an awareness that less work can result in greater crop yields. Inspired in part by Masanobu Fukuoka’s book, One Straw Revolution, my family experimented with gardening methods which could increase yields with less effort. Fukuoka spent over three decades perfecting his so-called “do-nothing” technique: commonsense, sustainable practices that all but eliminate the use of pesticides, fertilizer, tillage, and perhaps most significantly, wasteful effort.

Farmscaping "Farmscaping" is a holistic approach to pest control on farms that focuses on increasing biodiversity in order to maintain healthy populations of beneficial insects, birds, bats, and other wildlife as part of an ecological pest management program. Farmscaping often treats beneficial wildlife as a kind of "minature livestock" that must be managed and provided for for just like cows, sheep, chickens, and other farm animals. Farmscapers use observation and science to plan hedgerows, flower beds, cover crops, and water reservoirs to favor beneficial wildlife over pests. Benefits of Farmscaping Farmscaping reduces the need for pesticides, lowering costs and reducing exposure to potentially harmful chemicals by farmworkers and consumers. Farmscaping is also simple and generally inexpensive to implement.

The Best Copyright-Free Photo Libraries: - DotGovWatch Exposing the good, the bad, and the buggy - A Blog Monitoring U.S. Federal, State, and Local Government Websites Thousands of photos taken by U.S. Government employees as part of their official duty are free of copyright and free to use. Based on my extensive review of government photo libraries, the best collections below. 4 Simple Steps to Grow a Hundred Pounds of Potatoes in a Barrel Container gardening isn't only for savvy urban gardeners and folks with limited space to grow, it can also be for folks who want to maximize their yields in a controlled environment. Not only does growing potatoes in a barrel reduce the amount of weeding and exposure to pests and fungi, you don't even have to risk shovel-damage to the tender potatoes by digging them out of the ground when they're done, just tip the container over! After extensive research to plan my own potatoes-in-a-barrel, I've boiled all of the recommendations down to 4 simple steps to a winning potato harvest.

A Guide To Finding Digital Books: 20+ Free Online Libraries It’s a shame more people are not aware of the wide array of free online libraries. Databases, books, videos, audio recordings and e-books are available, just waiting to be viewed and used. This guide will help avid readers, serious researchers and casual surfers alike get the most out of free web libraries. Best Online Libraries 16 Reasons To Have Daily Sex Stressed, burdened with life’s difficult problems and fear that your health is declining? Then sex is the answer to happiness, longevity and a healthy body. You don’t agree? 1. De-stress Sex helps you reduce stress. When deep breathing exercises fail to de-stress you, sex will do the needful.

The Wrong Body Language You're automatically signed up for the Inc. Wire, so you never miss a single day's most important news, tips, or ideas. Roll over the name of the other Inc. newsletters to see how you can get great Inc. articles on the topics that matter most to you. How to Detect Lies - body language, reactions, speech patterns Interesting Info -> Lying Index -> How to Detect Lies Become a Human Lie Detector (Part 1) Warning: sometimes ignorance is bliss. After gaining this knowledge, you may be hurt when it is obvious that someone is lying to you. The following deception detection techniques are used by police, forensic psychologists, security experts and other investigators.

Detect Lies Edit Article Detecting Lies in the Face and EyesDetecting Lies in Body Language TicsDetecting Lies in Verbal ResponsesDetecting Lies Through Interrogation Edited by Battlecruser9292, Ben Rubenstein, Kristin, Habitbuster and 168 others Looking at facial expressions to determine whether a person is lying might just save you from being a victim of fraud. Or it could help you to know it's safe to trust your heart and get involved with an attractive stranger. Jury analysts use lie detection when helping to select a jury; the police do it during interrogation.

Body Language Basics From a flip of the hair to hands on your hips, how you move, gesture, and make expressions can say as much as what comes out of your mouth. Why do I need to register or sign in for WebMD to save? We will provide you with a dropdown of all your saved articles when you are registered and signed in. The 4 Ways You Can Use Body Language To Influence Success If you see someone frowning, head bowed, shoulders slumped, it’s a fair bet they’re feeling low in confidence. But which came first: the slumped shoulders or the bad mood? Your body language doesn’t merely reflect your emotions, it’s often the cause. By learning some of the principal ways that your own posture, gestures, facial expression and even tone of voice affect your mind, you will be more aware of the factors influencing your mood, and give yourself an edge in presentations and negotiations. 1.