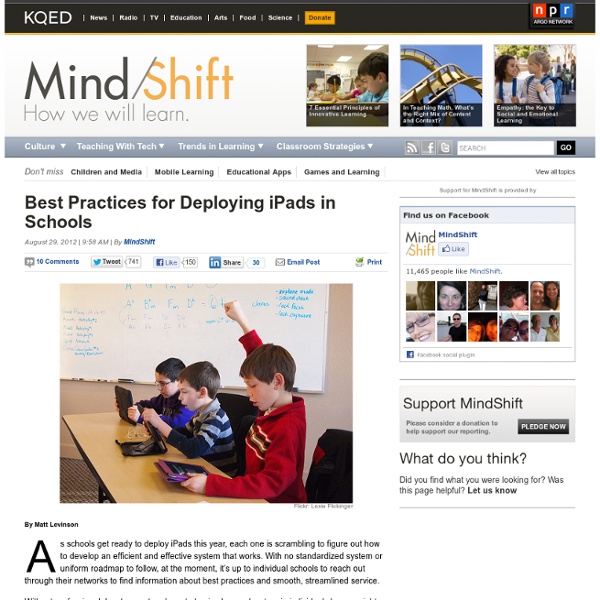 Digital Tools Teaching Strategies Flickr: Lexie Flickinger By Matt Levinson As schools get ready to deploy iPads this year, each one is scrambling to figure out how to develop an efficient and effective system that works. With no standardized system or uniform roadmap to follow, at the moment, it’s up to individual schools to reach out through their networks to find information about best practices and smooth, streamlined service. Without professional development and a set plan in place, educators in individual classes might be stumped by how to set up iPads for different uses. To that end, here are some ideas about how to put a system in place for iPad use in classrooms:

An Apple for the teacher: are iPads the future in class? I'm a self-confessed Apple fanatic so I was curious to see how iPads and iPods could be used successfully in a primary school. I was sure they would inspire and encourage the teachers I work with to take a chance and think outside their comfort zone and embrace new technology. But before our school jumped on the iPad bandwagon, I wanted to determine how these devices were going to offer a better learning experience compared to the laptops that we already had in our school. My 'iPad journey' began approximately a year ago, when I bought an iPad 2. I was hooked. My then three-year-old daughter, was also showing an interest.

Teachers Guide on The Use of iPad in education iPad is a cool versatile tool that has a huge potential in education. It is widely believed that iPad has started tranforming the face of education and revolutionizng modes of learning. Results coming out of pilot studies on the integration of iPads in the classroom seem to be promising. The 4 Big Reasons You Should Try Mobile Learning The idea of implementing mobile learning into a course or instruction may be daunting for many educators. They may assume that mobile learning (aka m-learning) is too complicated and so decide to stick to the methods they have more experience with. Besides, the old fashioned methods of learning have worked for centuries, so what’s the need for change? However, the initial anxiety is quickly overcome once people realize the huge advantages that are gained from using m-learning . Accessibility Mobile learning content is easily accessible.

Creative ICT: iPads - The Basics Many schools are just at that very exciting stage of introducing iPads for learning into their classrooms and for some teachers this poses an endless amount of questions such as, "Where do I start?", "Which Apps should I download?", "How do I get online?" 5 Things Not To Do During an iPad Rollout 1-to-1 Programs | Feature 5 Things Not To Do During an iPad Rollout K-12 teachers and administrators pinpoint five different areas that schools should be aware of when rolling out iPad initiatives. Bloomin' Apps This page gathers all of the Bloomin' Apps projects in one place.Each image has clickable hotspots and includes suggestions for iPad, Android, Google and online tools and applications to support each of the levels of Bloom's Revised Taxonomy.I have created a page to allow you to share your favorite online tool, iOS, or Android app with others. Cogs of the Cognitive Processes I began to think about the triangular shape of Bloom's Taxonomy and realized I thought of it a bit differently.Since the cognitive processes are meant to be used when necessary, and any learner goes in and out of the each level as they acquire new content and turn it into knowledge, I created a different type of image that showcased my thoughts about Bloom's more meaningfully.Here is my visual which showcases the interlocking nature of the cognitive processes or, simply, the "Cogs of the Cognitive Processes". IPAD APPS TO SUPPORT BLOOM'S REVISED TAXONOMYassembled by Kathy Schrock​ Bloom's and SAMR: My thoughts

Apple iPad: A Comprehensive Guide Last updated: January 27th, 2010 After months of speculation and rumors, it's official: The Apple iPad is real. The device, announced earlier today by Apple CEO Steve Jobs, is designed to fill the perceived gap between the smartphone and the laptop. With literally thousands of articles and blog posts being written about Apple's new device, it's easy to experience information overload.

The 60-Second Guide To Smartphones In Education Smartphones and apps are the pinnacle of buzzwords when it comes to education. You can’t swing an app without hitting a smartphone…or something. So what’s all the buzz about? Are smartphones really that big a deal in education? Let’s examine the facts: - Ownership of smartphones continues to rise at a brisk pace Prss is trying to design the iPad publishing app that Apple never built A Netherlands-based company wants to revolutionize iPad publishing. In much the same way that Quark enabled desktop publishing in the eighties and platforms like WordPress and Tumblr allowed anyone to cheaply and easily set up their own blog in the aughts, Prss wants to put iPad publishing in the hands of people who lack programming skills. The app is the latest in a series of tools that democratize publications, giving high-level capabilities to those who want to distribute their message but don’t necessarily have the technical skills. The idea for Prss came after entrepreneur Michel Elings and longtime travel writer and photographer Jochem Wijnands constructed their own iPad publication called TRVL. They had been using an iPad conversion platform WoodWing but became fed up with what they saw as its limitations. The platform is based off InDesign, which they felt made it inherantly print-centric.

Top 10 best tips and tricks for new iPhone and iPad users New to iPhone, iPod touch, or iPad and wondering what tips and tricks you really need to know to get started? Have friends and family that are new to iPhone and would love to have a handy link to send them? Look no further. Carefully curated below are TiPb's top 10 tips and tricks for new users -- everything you need to know to get going now. Note: If you're really brand new, check out our New User Guide first, the fastest way to get up and running and enjoying your new device. How the Home button works: Navigation, Multitasking, Accessibility, Restart, Reboot, Recovery, and DFU

5 Critical Mistakes Schools Make With iPads (And How To Correct Them) Over the last few years K-12 schools and districts across the country have been investing heavily in iPads for classroom use . EdTechTeacher has been leading iPad professional development at many of these schools and we’ve seen firsthand how they approach iPad integration. While we’ve witnessed many effective approaches to incorporating iPads successfully in the classroom, we’re struck by the common mistakes many schools are making with iPads, mistakes that are in some cases crippling the success of these initiatives. We’re sharing these common challenges with you, so your school doesn’t have to make them. 1) Focusing on content apps