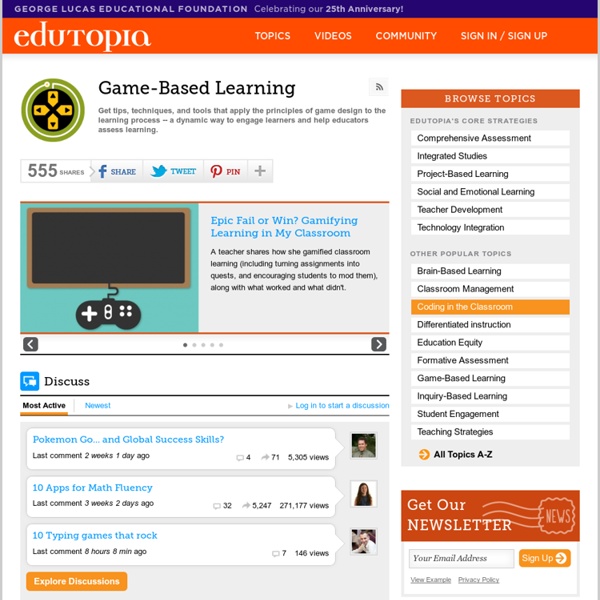 Katie Salen on the Power of Game-Based Learning (Big Thinkers Series) Student: It's really cool school. I've never gone to a school quite like it. Student: Well, we get to design games and play each other's games, so instead of just doing work, work, work all day. Student: Well, we have the basic classes of a school, but we gave them different names, like math is called Code World. Student: We learn everything that all the other schools learn. Katie Salen: My name's Katie Salen and I wear a couple of different hats. Quest to Learn is a new sixth grade through twelfth grade public school that opened in New York City in Fall 2009, and it's a school that has the tagline, school for digital kids. So it's a school that from the ground up has been designed to leverage the kind of digital lives of kids, and it also looks at the notion of how games work as learning systems, and it's developed a pedagogical approach that delivers what we call game-like learning. Student: And then you have two goals, but one of them is impossible to get to. Teacher: Okay.

SimCityEDU | Create & Share SimCity Learning Tools 5 Skills That Games Teach Better Than Textbooks -- THE Journal Gaming 5 Skills That Games Teach Better Than Textbooks Gaming offers the excitement of competition and a clear promise of rewards for accomplishments. By Dian Schaffhauser11/05/14 Playing games at school can inspire students in ways that nobody could predict. The victory is decided by the modest 10 points Dumbledore grants to Gryffindor's Neville Longbottom, and with it comes a lesson worth learning: Following your conscience, even in small ways, can have a big impact. Connecting Physical Experiences with Learning Some subjects are best learned through feeling them. By using a game environment with simulations, such as GameDesk's Plate Tectonics, students can experience what happens when the earth's plates move, except in a dramatically speeded up amount of time.

QR Code Generator: QR Stuff Free Online QR Code Generator And Creator For Brochures, Print Advertising, Business Cards & Stickers Kathy Schrock's Kaffeeklatsch WoWinSchool / FrontPage This is a collaborative workspace for the development of instructional items for the use of MMORPGs, like World of Warcraft, GuildWars2 and others, in a school setting. Please take a moment to explore the various sections of the site and if you would like to contribute, please email Lucas Gillispie at lucas AT edurealms.com. The original focus of this project was to develop a curriculum for an after school program or "club" for at-risk students at the middle and/or high school level. This program would use the game, World of Warcraft, as a focal point for exploring Writing/Literacy, Mathematics, Digital Citizenship, Online Safety, and would have numerous projects/lessons intended to develop 21st-Century skills. All project materials, including a fully-developed language arts course, aligned to middle grades standards, is now available under a creative commons license here. PLEASE NOTE - All portions of this wiki are open and visible. -Lucas Gillispie, Project Founder and Lead Developer

Game-Based Learning to Teach and Assess 21st Century Skills Game-Based Learning, and particularly serious games that teach content, are fast becoming utilized in the classroom. Frequent success stories are appearing, from Minecraft in the elementary classroom to games that teach civics. There is curriculum that pairs World of Warcraft with language arts standards, and many other variations where the gaming focus is on content. What about 21st-century skills? Collaboration MMOs are hugely popular. Communication All of the games above, which require collaboration, also require communication. Critical Thinking/Problem-Solving Well-designed games require players to solve a variety of complex problems, some of which require standards-aligned learning and some that simply require general critical thinking and problem-solving. We must find time for students to play these games in and out of the class to teach content and 21st-century skills. One of the biggest misunderstandings about games, and people who play them, is that games don't "teach" anything.