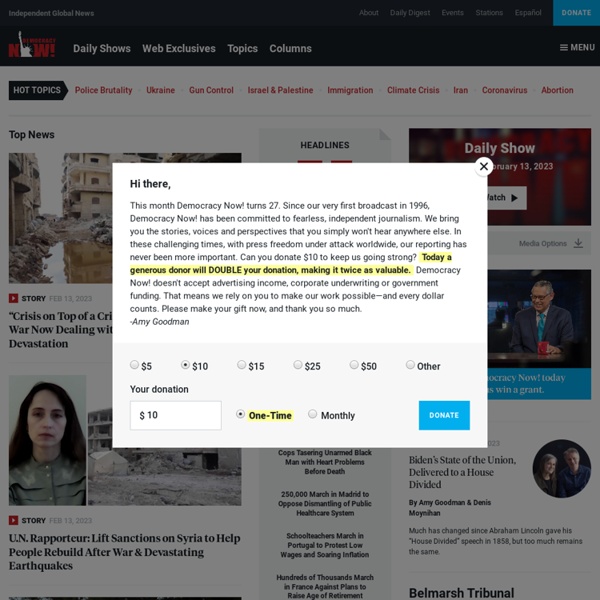 Dissident Voice Understanding 9/11: A Television News Archive CrunchPanorama 6-Hour Live Broadcast From Troy Davis Execution: Did Georgia Execute an Innocent Man? Troy Anthony Davis, who maintained his innocence until his last breath, was executed by the state of Georgia Wednesday night. As the world watched to see whether Davis’s final appeal for a stay of execution would be granted by the U.S. Supreme Court, Democracy Now! This archived video of the broadcast includes interviews with Troy Davis’s sisters, Martina Correia and Kim Davis; Troy Davis’s nephew, De’Jaun Davis Correia; NAACP president Benjamin Jealous; president of the Georgia State NAACP, Ed DuBose; chairperson of the NAACP, Roslyn M. We also broadcast a report back from journalists, and Davis’s lawyers, who witnessed the execution. AMY GOODMAN: From Georgia’s death row prison in Jackson, this is a Democracy Now! Troy Davis is not far from here. Just a few hours ago, I went down the road to the local church, where human rights leaders gathered to talk about Troy Davis and to call for clemency. Standing with me right now are two people who have followed this case very closely.

99 Resources to Research & Mine the Invisible Web College researchers often need more than Google and Wikipedia to get the job done. To find what you're looking for, it may be necessary to tap into the invisible web, the sites that don't get indexed by broad search engines. The following resources were designed to help you do just that, offering specialized search engines, directories, and more places to find the complex and obscure. Search Engines Whether you're looking for specific science research or business data, these search engines will point you in the right direction. Turbo10: On Turbo10, you'll be able to search more than 800 deep web search engines at a time. Databases Tap into these databases to access government information, business data, demographics, and beyond. GPOAccess: If you're looking for US government information, tap into this tool that searches multiple databases at a time. Catalogs If you're looking for something specific, but just don't know where to find it, these catalogs will offer some assistance. Directories

Welcome to MichaelMoore.com OccupyStream - All Occupy Wall Street Streams and IRC - Live Revolution Cell Phone Guide for Occupy Wall Street Protesters (and Everyone Else) Occupy Wall Street has called for a global day of action on October 15, and protesters are mobilizing all over the world. In the United States, the Occupy Wall Street movement has already spawned sizeable protests in New York, Washington DC, Boston, Seattle, San Francisco, Oakland, Austin, and other cities. Several of these movements have faced opposition from their local police departments, including mass arrests. Protesters of all political persuasions are increasingly documenting their protests -- and encounters with the police -- using electronic devices like cameras and cell phones. 1. Think carefully about what’s on your phone before bringing it to a protest. Password-protect your phone - and consider encryption options. Back up the data on your phone. 2. Maintain control over your phone. Consider taking pictures and video. 3. Remember that you have a right to remain silent -- about your phone and anything else. 4.

P2P Foundation Global Freedom Movement cable cluster graph A interactive visualization of the references between diplomatic cables. Index Browse the visualizations! Please use a recent Chrome or Safari. How is it made? The cables.csv contains a field for referencing related cables via MRN. Example: What is the structure of the network? Some of these clusters form a star which can be a indication for a type of "action request" that was sent to multiple embassies. The largest cluster (giant) contains ~100000 cables with ~143000 references. For every community, cluster or star a interactive visualization is generated. What are missing cables? From the total of 251287 cables ~56000 additional cables are referenced but not included in the cables.csv. For some of the missing cables it is possible to estimate the date of creation. What can i do? Zoom in and out of the graph with the (+ / -) on the upper left. How do i read the graph? The visualization contains some indicators of graph and cable properties. Code and Data cable2graph source code (GPLv3). Contact