Wilkinson Residence in Portland is one swanky treehouse 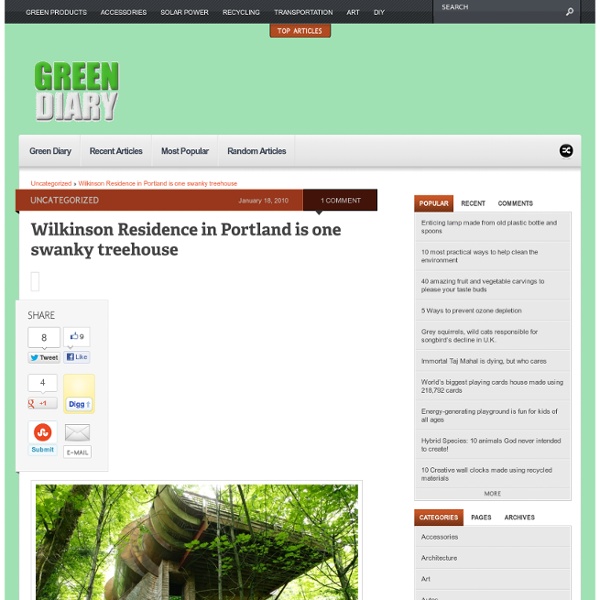 Evoking the feeling of being in a tree house is exactly what the beautiful Wilkinson residence in Portland does. Located on a flag lot, the extraordinary house is brilliantly designed to perfectly blend with the natural landscape. A steep sloping grade provided the opportunity to bring the main level of the house into the tree canopy. Catering to the desire of the client, Wilkinson Residence designed a dwelling that not only became part of the natural landscape but also addressed the flow of music. It has a natural wood ceiling that wonderfully floats on curved laminated wood beams, passing through a generous glass wall, which wraps around the main living room. The interior space of this amazing house flows seamlessly through to the exterior. Via: Boingboing

Architecture Imagine the renovation dilemmas. A huge penthouse of a converted 1930s office building in TriBeCa, New York, is to be turned into a functioning home for a family with three teenagers. In fact, we can not quite imagine the issues that faced Steven Harris Architects when the family showed up, literally, at the doorstep of the celebrated architect and asked if he’d like to work on their home. Harris said yes and proceeded to make his magic. The scale of the apartment is huge and the freedom from budget constraints allowed for some spectacular solutions. Harris’s work is often distinguished by clarity and light, by the use of glass, by the maximization of views and, above all, bold solutions. What emerged as a result of the TriBeCa Penthouse project, is a multi-level (27th and 28th floors) nearly 8,000 square-foot (743 square meter) family-friendly residence that includes self-contained guest quarters and a new glass-and-teak-beam rooftop pavilion that functions as a recreation room.

Loft Tour: The Cement Factory – LoftLife Magazine – The Loftstyle Guide to Life in the City To this day, Spanish architect Ricardo Bofill’s legendary live/work complex in Barcelona, Spain remains one of, if not the most impressive examples of adaptive reuse we’ve ever seen. It all started about 35 years ago when the controversial architect discovered an abandoned cement factory comprised of over 30 silos, underground galleries and huge engine rooms. He bought it and began renovation. This included defining the space by demolishing certain structures, cleaning cement, exposing previously concealed forms, and planting various greenery including eucalyptus, palms, olive trees and cypresses. Today, the factory has been successfully transformed into his personal home, as well as a multitude of offices, modeling and archival laboratories, a projection room, and a huge space known as ‘The Cathedral’, which serves as a venue for subsequent exhibitions, lectures, and concerts. The vast space exemplifies incredible restraint. Check out the full story of “The Cement Factory” here.

15 Elegant and Creative Ways to Maximize Space Under Your Stairs We’ve seen a lot of indoor arrangements where the space under the stairs is completely neglected. This usually happens because the owners fear not to overcrowd the living room or hallway. In this post we would like to present 15 creative and elegant ways on how to effectively use the space under your stairs without “damaging” your home’s appearance. In fact, we think the ideas below will help improve the overall design of the rooms where they are put to practice. If you are living in a small crib and feel the need for more space, you might consider improvising a bookcase, a home office or an entertaining area. We particularly like the cozy extendable bed in the first photo, which could turn out to be a good solution when receiving guests.

The Sifter's Top 10 Homes of 2010 If you’re a regular reader of the Sifter you’re familiar with my real estate fascination. I love posting all types of homes. From the unique and interesting to the grand and opulent. The Biggest and Most Expensive Home Posted in 2010 This staggering 48,00 square foot mega-mansion in the Cayman Islands was listed at a jaw-dropping $59 million USD! The Best Use of Limited Space [500 sq ft] Architects Darrick Borowski and Danny Orenstein show us that it’s possible to live quite comfortably in 500 square feet (46 sq m). The Most Exotic Home Posted in 2010 Located in gorgeous Phuket, Thailand, this stunning property boasts over 8,000 square feet of interior space and over 8,500 square feet of outdoor terrace space as well! The Craziest Penthouse Posted in 2010 It’s not surprising that the craziest, most outlandish penthouse posted in 2010 would be in New York City. The Coolest Retrofit Property of 2010 It’s a 1965 Boeing 727 converted into a hotel room. The Most Unique Property of 2010

See-through church, Limburg/Belgium by Gijs Van Vaerenbergh | Architecture Lab Project Details: Location: Limburg, Belgium Type: Cultural - Public Architects: Gijs Van Vaerenbergh - www.gijsvanvaerenbergh.com Photos: Kristof Vrancken / Z33 – Mine Daelemans photo by Kristof Vrancken / Z33 The church is a part of the Z-OUT project of Z33, house for contemporary art based in Hasselt, Belgium. Z-OUT is an ambitious longterm art in public space project that will be realised on different locations in the Flemish region of Limburg over the next five years. photo by Kristof Vrancken The church is 10 meters high and is made of 100 layers and 2000 columns of steel. The design of the church is based on the architecture of the multitude of churches in the region, but through the use of horizontal plates, the concept of the traditional church is transformed into a transparent object of art. photo by Mine Dalemans

10 Most Popular Projects Presented in September 2011 Dear Freshome readers, it is time for us to draw a line and see who created what in the month of September. We are happy to see that each posts gets your appreciation expressed through voting, sharing, comments and relevant advice. We are certain you guys want to see the best of the best, so here are the 10 most popular posts presented in September 2011, according to your Facebook shares. Remember that by clicking on the pictures, you can see more photos and details about each project. #1. According to you Facebook shares, the top project presented in September pays tribute to …pets. #2. #3. #4. #5. #6. #7. #8. #9. #10.

Moshe Safdie: Singapore | EMPTY KINGDOM You are Here, We are Everywhere before & after: trolley depot renovation It’s always been my dream to live in a home with airy, open rooms and lots of exposed bricks, so when this renovation project from Amy came across my desk, I was instantly smitten. Located in Atlanta, this building is about 100 years old and originally served as a trolley depot. Thankfully, Amy and her husband did a wonderful job preserving many of the original details while adding some modern touches that complement the overall aesthetic beautifully. Wonderful job, Amy! — Kate Have a Before & After you’d like to share? Read more about Amy’s renovation after the jump! Time: 1 year Cost: $500k Basic Steps: The basic steps we took to achieve the look were to preserve the original space as much as possible and use the existing lines (like the arched windows) in other elements, like the niche, and the arched doorway — even the arch of the armoire.

Sarah Klassen/Haute Design: Architecture: Andersson-Wise Portfolio: Andersson-Wise / Part One: Stone Creek Camp I came across the work of this amazing studio a short while ago, and couldn't wait to share some of their projects. Thus, a brand new series has begun—starting with a well-planned, warm and woodsy lakeside home called Stone Creek Camp. Set into the sloping landscape in a very non-intrusive manner, this beautiful, remote, rustic and modern home welcomes with an intriguing entryway of stone and stacked wood pieces... The path you see leads to the three main areas—the main lodge, guest house and the master house. Studio Profile: Andersson-Wise is an award-winning architecture and design studio based in Austin, Texas.

12 Architects that Changed the World From time to time, there is a great artist that changes the way we perceive masterpieces and other people and gives us new emotions. Still, humanity gives birth to visionaries in other domains as well. And architecture is yet another great field where these bright minds create marvels and change perspectives. Some architects are even responsible for creating masterpieces with an emotional impact on people and can change the way we perceive cities and countries. 1. His portrait Oscar Ribeiro de Almeida Niemeyer Soares Filho is considered to be a pioneer in creating new possibilities for using the reinforced concrete just for aesthetical reasons. He was part of the international team that designed the UN headquarters in New York and his conceptual plan was the main source of inspiration for the constructors. While in Europe, he created several buildings, including the headquarters of the French Communist Party and the Mondadori Publishing House office near Milan. Source His work Image source

Light Light's Sublime Levitating Lamps Posted by Ray | 30 Sep 2011 | Comments (9) Designer Angela Jansen of Design Academy Eindhoven recently collaborated with engineer Ger Jansen on a pair of skeuomorphic LED lamps that they're currently selling as Light Light. Their website knowingly notes that "It is uncommon for engineers to find good domestic applications for their technology... and it is likewise rare for designers of consumer objects to embrace cutting-edge technology wholeheartedly." Which, of course, is "perhaps what makes the cross-pollination of ideas between Angela Jansen and Ger Jansen so remarkable." The Light Light series creates an incredible visual conversation piece. Bombastic copy aside, the products speak for themselves. Some assembly required (illustrated below, not above): In short, Light Light is (the first?) Again, per the designers: "...this handcrafted lamp can be dimmed but never ignored. Any way you slice it, Light Light is a pretty sweet: More videos here.