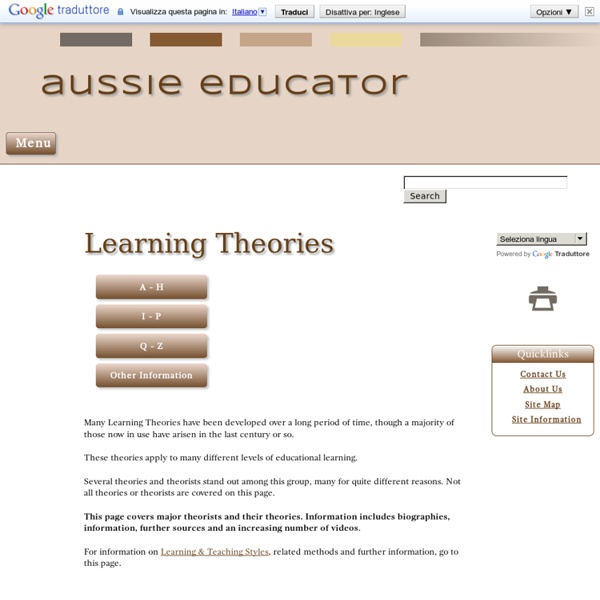 Many Learning Theories have been developed over a long period of time, though a majority of those now in use have arisen in the last century or so. These theories apply to many different levels of educational learning. Several theories and theorists stand out among this group, many for quite different reasons. Not all theories or theorists are covered on this page. This page covers major theorists and their theories. For information on Learning & Teaching Styles, related methods and further information, go to this page. Bandura, Albert Bandura and his Social Cognitive Theory. Albert BanduraText presentation on the man and his theories. Bloom’s Taxonomy Benjamin BloomThe man and his works. Constructivism Constructivism and the Five E’sBrief rundown then goes to seven E’s. De Bono, Edward Edward De Bono and lateral & creative thinking. Critical Thinking ResourcesTertiary level. Dewey, John Centre for Dewey StudiesPublications, papers, audio, reading list, more. Educational Theories Emilia, Reggio

Principles of Instructional Technology Instructivism In educational circles everywhere presently, one of the most hyped theories of learning is the student-centered, discovery-based, self-directed theory of constructivism. At the other end of this educational theory spectrum is the idea of instructivism. Instructivism, by this name or any other, has been around for many years and has formed the basis of the American, among others, educational system. Based on behaviorist theories, Instructivism, sometimes referred to as Direct Instruction incorporates a teacher-directed, carefully planned curriculum, with purposeful teaching at its core. It follows two basic assumptions. For students, there is little room for self-discovery and reflection. Arguments from both sides of the spectrum, constructivism and instructivism, cite data to support their view of learning. Further possible criticism of instructivism are many and beyond the scope of this paper to outline. References Diaz, D. Finn, Chester, E. & Ravitch, Diane (1996).

The genius of babies | Playlist Now playing MIT researcher Deb Roy wanted to understand how his infant son learned language — so he wired up his house with videocameras to catch every moment (with exceptions) of his son's life, then parsed 90,000 hours of home video to watch "gaaaa" slowly turn into "water." Astonishing, data-rich research with deep implications for how we learn.

Early Child Development - Benefits of Early Child Development Programs A vast body of research has demonstrated that Early Child Development (ECD) programs benefit children, families, and communities. The reduced dropout and repetition rates, improved school achievements, greater adult productivity, and higher levels of social and emotional functioning encouraged by ECD programs make them a highly cost-effective means of strengthening society as a whole by ensuring that its individual members live up to their full potentials. Evaluations of well-conceived programs designed to foster early development demonstrate that children who participate in these programs tend to be more successful in later school, are more competent socially and emotionally, and show better verbal, intellectual and physical development during early childhood than children who are not enrolled in high quality programs. Benefits of ECD interventions can be found in the following areas: ECD programs in the United States ECD programs in the developing world Sources and References

The Importance of Early Childhood Initiatives June 5th was the national Early Learning Day of Action, a day that we emphasize efforts to enhance children’s healthy early learning. With current research, we gain a greater understanding of the importance of healthy development in the early years. This means that we must create safe environments for them that are conducive to growth and that minimize the potential for issues like violence, abuse, neglect or other trauma. The most critical phases of brain development occur in the child’s first five years. We know that in the first five years of life brain development occurs more rapidly than during any other phase of development. We also know that children’s early experiences not only have a profound effect on their brain development but also on other parts of their life and health that can impact them even into adulthood. I have referred to the Adverse Child Events (ACE ) research that has been replicated with over 400,000 people. What research tells us. Help for ECE programs.