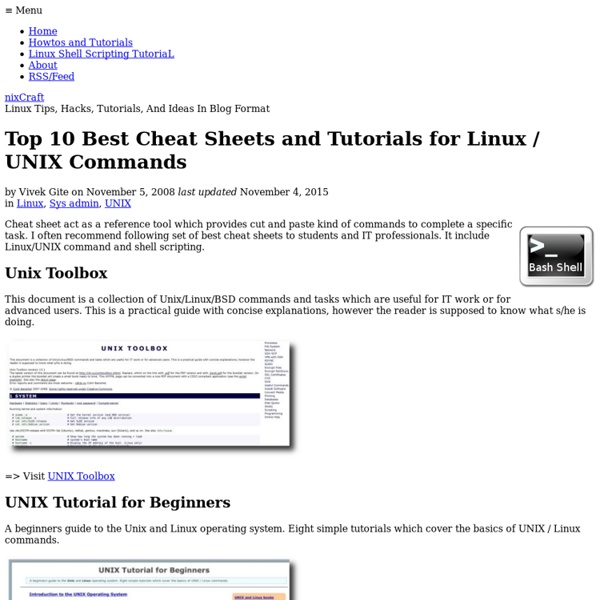 Cheat sheet act as a reference tool which provides cut and paste kind of commands to complete a specific task. I often recommend following set of best cheat sheets to students and IT professionals. It include Linux/UNIX command and shell scripting. Unix Toolbox This document is a collection of Unix/Linux/BSD commands and tasks which are useful for IT work or for advanced users. => Visit UNIX Toolbox UNIX Tutorial for Beginners A beginners guide to the Unix and Linux operating system. => Visit UNIX Tutorial for Beginners Linux Command and Learning Shell Tutorials You have Linux installed and running. => Visit Learning the shell Learn UNIX in 10 minutes This is something that I had given out to students (CAD user training) in years past. => Visit Learning UNIX in 10 minutes How To Look Like A UNIX Guru This lecture takes you through the basic commands and then shows you how to combine them in simple patterns or idioms to provide sophisticated functionality like histogramming. Share this on:

Cs0rfe added: How to Boot a Linux Live USB Drive on Your Mac Think you can just plug a standard Linux live USB drive into your Mac and boot from it? Think again. You’ll need to go out of your way to create a live Linux USB drive that will boot on a Mac. This can be quite a headache, but we’ve found a graphical utility that makes this easy. You’ll be able to quickly boot Ubuntu, Linux Mint, Kali Linux, and other mainstream Linux distributions on your Mac. The Problem Apple’s made it difficult to boot non-Mac OS X operating systems off of USB drives. There are several ways around this. rEFInd should allow you to boot those USB drives if you install it on your Mac. Use Mac Linux USB Loader A tool named “Mac Linux USB Loader” by SevenBits worked well for us. Note: Be sure to move the Mac Linux USB Loader application to your Applications folder before running it. First, insert the USB drive into your Mac and open the Disk Utility application. Next, open the Mac Linux USB Loader application you downloaded. Booting the Drive

Switching From Windows to Nix or a Newbie to Linux - 20 Useful Commands for Linux Newbies So you are planning to switch from Windows to Linux, or have just switched to Linux? Oops!!! what I am asking! For what else reason would you have been here. From my past experience when I was new to Nux, commands and terminal really scared me, I was worried about the commands, as to what extent I have to remember and memorise them to get myself fully functional with Linux. 1. The command “ls” stands for (List Directory Contents), List the contents of the folder, be it file or folder, from which it runs. root@tecmint:~# ls Android-Games Music Pictures Public Desktop Tecmint.com Documents TecMint-Sync Downloads Templates The command “ls -l” list the content of folder, in long listing fashion. Command “ls -a“, list the content of folder, including hidden files starting with ‘.’. Note: In Linux file name starting with ‘.‘ is hidden. For more “ls” command examples read 15 ‘ls’ Command Examples in Linux. 2. The “lsblk -l” command list block devices in ‘list‘ structure (not tree like fashion). 3.

Fear of Public Speaking — Public Speaking Coach Lynda Paulson of Success Strategies As the CEO of a major financial institution, he was called on daily to make decisions that moved millions of dollars. The man at the podium had just introduced him, and hundreds of expectant faces turned toward him. But the executive was frozen with fear, unable to deliver the talk that he'd rehearsed a dozen times, unable to even get out of his chair. "This executive's fear of public speaking is a common complaint; it often attacks people of prestige and power," says Lynda Paulson, president of Success Strategies Inc., a speech coaching firm. "It's ironic that we've talked to people since we were age two," she comments, "and yet we get in front of a group of people and we're asked to speak about some subject we're an expert on, and we become something we're not: we fidget, we squirm, we sweat, we panic." Ms. "That's what happened to this banker," she explains. Studies confirm that fear of public speaking ranks No. 1 among phobias cited by business people. Facing Your Fears

Readers Digest Most Amazing Walks iPhone App – Initial Look : whitespider1066.com Here is a post for my fellow iPhone owning readers. I noticed on the app store this morning a new app from the Readers Digest called Most Amazing Walks, and is currently being sold at the introductory price of 59p. The app boasts nearly 200 walks of varying difficulty. The app and walks ar based on the Readers Digest book of the same name which is available for £14.99. The app breaks the country up into the following regions: Central England, Northern England, Scotland, Southeast England, Southwest England and Wales. Once you chose your county you then get the list of walks available for that county. The grading for the walks is on a scale of 1 to 5, with 1 being the easiest. Scrolling the page up reveals summary details of the walk. I like this little addition a lot. Clicking the begin walk button then takes you on to the next bit that really shows how guide books should be going on the iPhone and smart phones. I have to say my initial look at the app has impressed me.

11 Beautiful Home Interior Design Styles Decorating styles have evolved over the centuries in response to the changing tastes of various groups of people. Every style has benefits to the people who will enjoy the home for many years to come. Many styles were born out of previous styles and have evolved into a distinct type of decorating for a certain feel. Each of the following designs expresses personality and taste specific to an era. 1. Shabby Chic British look that incorporates all-white interior walls, floors, and ceilings accented with vintage items resting on distressed furniture. 2. An eclectic look is created through a trendy approach called maximalism, which means to make the most of a small space. 3. Noticeable design features include solid colours with contrasting properties against a blank slate of walls and floor. 4. Softer colour contrasts highlight the art on the walls as the visual emphasis. 5. Bulky, comfortable chairs set against the stark lines of tables with metal legs. 6. 7. 8. 9. 10. 11.

Working in Costa Rica. Work Laws and requirements legally working in Costa Rica as a foreigner. Often people want to come to Costa Rica to live but also want (or need) to either work here or at least hold some form of part-time job to supplement their income. Some are retirees while other are younger who just want to work and live in another country. For the most part, but with a couple of exceptions, you cannot work at all in Costa Rica unless you have gained Permanent Residency or are a citizen of Costa Rica.. Laws here, as in many countries (including the USA) are designed to protect workers here from foreigners who would take jobs that would otherwise be filled by a Costa Rican. The only exceptions to this rule is an annual work permit or two specific types of residency. If you are highly skilled in an area where that job cannot be filled by a Costa Rican, the employer can apply for a work permit for one year. In order to work here, you must either be a citizen of Costa Rica or have legal Permanent Residency. OK...So who can work here? Need More Residency Information?

Demo | jQuery.popeye 2.0 | an inline lightbox alternative x Note: To see the full potential of CSS3 styling (shadows, gradients, rounded corners, alpha transparency), please view this page in a modern webkit or mozilla browser (Firefox 3.5+, Safari 4, Opera 10.50, Chrome 4). Other browsers will degrade gracefully. Example 1 The first popeye-box uses the standard options: it floats to the left and opens to the right, its navigation and caption show on mouseover. By placing the navigation inside the stage area (where the image is displayed), we can get it to hover above the image. No need to read this, just dummy text ;-) Vivamus ut nisi id libero interdum pretium. View HTML code used in this example Example 2 The second popeye-box has the following user-defined options: direction: 'left' - open to the left. caption: false - do not display captions (even though the images have alt tags with text). navigation: 'permanent' - the navigation is always visible. The navigation stays fixed to the right of the image. View HTML code used in this example Donate

Floating Bed The versatile Floating Bed can be used indoors or outside as a play house, tree house, or an extra bedroom. It’s simple to use both inside and outside: just install a ceiling ring, and you can move it in or out any time you like, to use as a bed or sofa. Visit The Floating Bed Co. website for more information! Check out other articles by Rachel here! How to Build a Hardwood Floor This Weekend If the room is carpeted, remove the old carpeting and padding to expose the plywood subfloor. If the room has a sound wood or vinyl floor, you can install the floating floor right on top. Floating floors also can be laid over a concrete slab. However, if the slab is below grade, such as in a basement, be sure the flooring is engineered for this situation. A quick word about baseboard molding: I removed the molding, laid the flooring, then installed new baseboard and quarter-round shoe molding. Start by vacuuming the subfloor.

Create a realistic folded paper text in Photoshop Today we will learn how to realize a folded paper text effect from scratch in Photoshop. We will firstly create the background using a couple of patterns, then we will work on the type treatment with the help of the pen tool, layer masks and other useful techniques related to dodge,burn and the transform tool. This tutorial is very simple to follow, so I suggest to everyone to give a try. Preview: Click to enlarge Become a Premium Member and get unlimited access to source files and premium resources for only 7$/month. Step 1 Create a new document in Photoshop. *note for Mac users: ctrl=cmd, alt=option Step 2 Fill the background with a dark green (#41514c). Step 3 To create the textured effect of the background, I’ve used 2 of our soft grunge patterns created by Piervincenzo. Select the pattern2_380_hard and press ok to fill the background. Finally set the layer to overlay with opacity 50%. Step 4 Create another layer, this time fill it with pattern_9_380_hard. Step 5 Step 6 Step 7 Step 8 Step 9 Step 10

The Best Linux Web Server Software (& Apache Alternatives) To be able to determine the ‘best’ one we need to look at several factors. Ultimately it depends on what your end goal is since some web servers are geared towards a kind of client, others for speed and others for security. The main factors we are going to look at are reliability, speed, security and ease of use. A lot of web servers will make claims to being the “king” of one or more of these factors. Here is their web server usage survey up until December 2010: Of the top web servers in current use, Microsoft’s web server IIS is the only pure-Windows one. Rounding out the top of the list we have Other (all other web server software), Google (who uses their own private custom server software), nginx and lighttpd. lighttpd Lighttpd (pronounced “Lighty”) was born out of a desire to create a fast, secure and reliable web server with a small memory footprint. Configuration is done very similar to Apache (which most people are used to) however the syntax is very different. nginx