Face to Face with Most Dangerous Animals 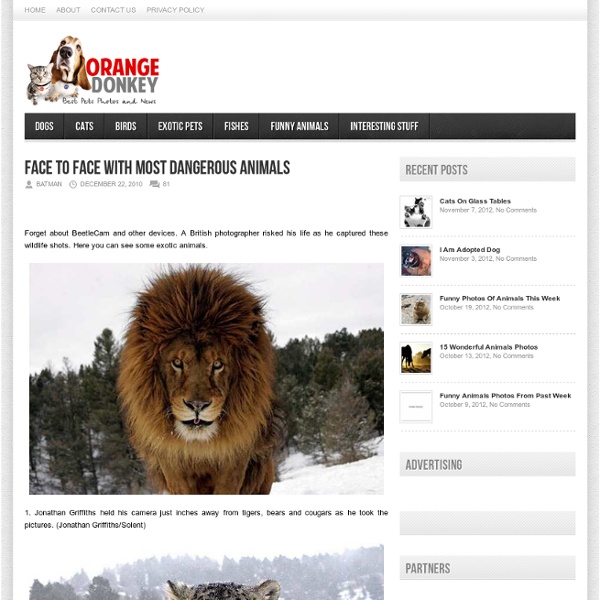 best animal photobombs ever... Photobomb - (verb) to drop into a photo unexpectedly. An otherwise normal photo that has been ruined or spoiled by someone who was not supposed to be in the photograph. hahaha! so THAT’S why I love cats!! via www.buzzfeed.com Like this: Like Loading... Filed under animals, art, family, funny happenings, life Tagged as animals, camera, cats, dogs, funny, horses, Kodak moments, pets, photobomb, Photograph, photography, pictures

23 Simply Awesome Photos Where Every Animal Is "Like A Boss" 23 Simply Awesome Photos Where Every Animal Is “Like A Boss” In Focus - National Geographic Photo Contest 2011 National Geographic is currently holding its annual photo contest, with the deadline for submissions coming up on November 30. For the past nine weeks, the society has been gathering and presenting galleries of submissions, encouraging readers to vote for them as well. National Geographic was kind enough to let me choose among its entries from 2011 for display here on In Focus. Gathered below are 45 images from the three categories of People, Places, and Nature, with captions written by the individual photographers. [45 photos] Use j/k keys or ←/→ to navigate Choose: Many people pilgrimage to Uluru, but what is seen there often depends on where you've come from. Eruption of the Cordon del Caulle. Beluga whales in the arctic having fun. This is a streetcar in New Orleans traveling back towards The Quarter on St. This image captures almost 6 hours of climbing parties on Rainier going for the summit under starry skies. Russia, polar region of West Siberia, Tazovsky Peninsula.

Corgi Puppy Arguing with a Piece of Ice A cute Corgi puppy named Bandit is staring at a piece of ice sitting on the floor. The pup leans towards it a couple of times not sure what to make of the strange object. It barks a few times, sneezes and jumps towards the ice but barely touches it with its nose. The piece frozen water slides just a little but it is enough to excite the funny puppy. Pencil Vs Camera by Ben Heine Ben Heine (born June 12, 1983 in Abidjan, Ivory coast) is a Belgian multidisciplinary visual artist. He is best known for his original series “Pencil Vs Camera”, “Digital Circlism” and “Flesh and Acrylic”. “Pencil Vs Camera” mixes drawing and photography, imagination and reality. It’s a new visual concept invented and initiated by Ben Heine in 2010. Chek him at www.benheine.com Enjoy The Gallery very good hands thanks Leave a Reply

Dogs: Old Wives Tales About Dogs: Dispelled Is it true that seven human years are equivalent to one dog year? Can dogs really smell cancer? Here, we debunk some commonly held canine myths. Dog Age Though many believe one human year equals seven dog years, this is a common misconception. Nose Color A dog's nose can actually change color in the winter months due to a condition called snow nose (or winter nose). Dog Doctor The ability of dogs to detect cancer via scent receptors ("their sniffer") is, in fact, a truth. Tail Wagging When a dog wags its tail, it is not necessarily a sign of friendliness. Eating Grass Dogs that eat grass are not necessarily sick. Guilt Trip Finding a puddle of piddle in the house may not be pleasant for humans, but dogs do not feel guilt when humans disapprove. Twitter: @ihavenet Recent Pet Articles For more Pet Stories and Articles, Click Here to Visit our Pets Section Copyright © 2012 Studio One Networks.

Wild Child Graphic design student Marynn is only twenty years old and she already has a consistent illustration style. Artwork © Marynn Link via Houhouhaha The 6 Most Incredible Real World Beast Masters Disney movies make hanging out with wild animals look like a walk in a fun, happy, completely predator-free park. But in the real world, being around untamed wildlife isn't so much about carefree singing and dancing and monkeyshinin' as it is about running and screaming. Then coming back later to clean up the poop trail you inevitably left behind. Or it usually is, anyway. #6. To explain this picture of a child cuddling his 20-foot-long snake, we have to tell a story. Fotobank.ruSurprisingly, it didn't end with the kid as poop. Imagine you're the proud parents of a 3-month-old baby. GettyAll that's missing is the colic. So, small. Not Koun Samang's dad, who found a python in his baby's bed and sweetly returned it to the jungle, presumably while giving it a back massage and singing it snaky lullabies. Herald Sun"Hey, what's the worst that could happen?" Seven years later, Samang and the now-giant snake he named "Lucky" are going strong. Herald SunTasting. #5. topdesignmag.com Come on, dude.