What You Need to Know About MOOC's - Technology 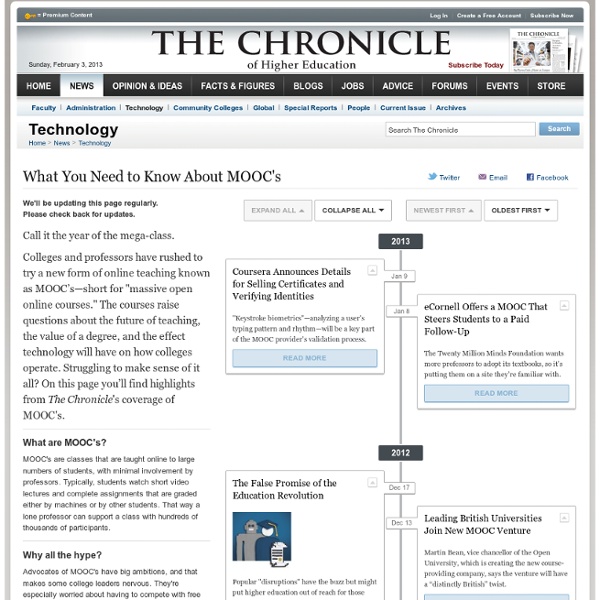 We'll be updating this page regularly.Please check back for updates. Call it the year of the mega-class. Colleges and professors have rushed to try a new form of online teaching known as MOOCs—short for "massive open online courses." The courses raise questions about the future of teaching, the value of a degree, and the effect technology will have on how colleges operate. Struggling to make sense of it all? On this page you’ll find highlights from The Chronicle's coverage of MOOCs. If you'd like to learn more about MOOCs in a condensed format, try reading "Beyond the MOOC Hype: A Guide to Higher Education's High-Tech Disruption," a new e-book by The Chronicle's technology editor. What are MOOCs? MOOCs are classes that are taught online to large numbers of students, with minimal involvement by professors. Why all the hype? Advocates of MOOCs have big ambitions, and that makes some college leaders nervous. These are like OpenCourseWare projects, right? Sort of. Who are the major players? edX

Top Ed-Tech Trends of 2012: MOOCs Part 5 of my Top Ed-Tech Trends of 2012 series The Year of the MOOC Massive Open Online Courses. MOOCs. This was, without a doubt, the most important and talked-about trend in education technology this year. And oh man, did we talk about it. How to Succeed in a Massive Online Open Course (MOOC) by Apostolos Koutropoulos & Rebecca J. Hogue “MOOCs provide a new methodology and modality for teaching and learning. This newness does pose some problems for learners, but also provides for exciting new possibilities. MOOCs require learners to be more proactive in their education and in building their personal learning networks (PLNs). Everyone can be successful in a MOOC, provided that certain steps are taken and strategies devised before, during, and after a MOOC.” In the past couple of years, massive online open courses (MOOCs) have become a trend among many members of the educational online community. This is particularly true of faculty who are interested in open educational resources.

Google's Open Course Builder: A Giant Leap into 21st Century Online Learning "Google's mission is to organize the world's information and make it universally accessible and useful." -- About Google Google is the most powerful nonhuman teacher ever known to actual humans. Implicitly and ceaselessly, Google performs formative assessments by collecting the following data: the content, genre and media that interests you most; when and for how long you access your external cloud brain; what your hobbies and routines are; with whom you work and communicate; who will get your November vote; and whether you prefer invigorating clean mint or enamel renewal toothpaste. By continuously refining the nuance of your sociogram, Google has already customized your next web exploration and taught itself to teach.

Open Online Courses: Higher Education of the Future? - Techonomy By Eric Rabkin One instructor’s firsthand look behind the scenes of the movement offering online education to the masses. I am “teaching” a MOOC, one of those massive, open, online courses through which Coursera and, more recently, edX offer people around the globe challenging learning experiences through a simple internet connection: video mini-lectures, machine-graded problem sets in some courses, peer-evaluated essays in others, discussion boards, and more. There’s no cost or credit for the “students” yet, but could this point the way to the “schools” of the future? I would guess that in forty-two years of on-campus teaching at the University of Michigan I have worked with between 12,000 and 20,000 students. Right now, under the auspices of U-M and Coursera, I am offering “Fantasy and Science Fiction: The Human Mind, Our Modern World” to about 39,000 participants.

Ten Useful Reports on #MOOCs and Online Education Supported by the Norwegian Ministry of Education and Research, the International Council for Open and Distance Education (ICDE) is the leading global membership organization for open, distance, flexible and online education, including e-learning, and draws its membership from institutions, educational authorities, commercial actors, and individuals. ICDE was founded in 1938 in Canada as the International Council for Correspondence Education and today has members from over 60 countries worldwide. Recently, ICDE had provided a digest of reports and papers published over the past year on MOOCs and online education.

Comparing MOOC Platform Features Jane Manning At Stanford, faculty who want to create a MOOC have a choice of 3 platforms: Coursera, NovoEd, and OpenEdX. The first two of these are owned and operated by for-profit companies founded by Stanford faculty, and the last is the open source platform developed by edx.org, a non-profit founded by Harvard and MIT. Stanford contributes code to the OpenEdX platform, and runs our own installation. I’m sometimes asked about feature differences among these platforms. But with one exception, features are rarely the deciding factor for faculty to choose one platform over another at Stanford.

MOOCs are Marketing Earlier this week, Georgia Tech and eleven other higher education institutions announced their participation in Coursera, a company that hosts online courses. Reactions have been predictably dramatic, as exemplified by Jordan Weissman's panegyric in the Atlantic, titled The Single Most Important Experiment in Higher Education. I'll spare observations on the obvious problems with Weissman's article, like the witless claim that lectures as web video somehow "reinvent" the lecture. IS UNIT WEB SITE - IPTS - JRC - EC MOOCKnowledge MOOCKnowledge is a 3-year study that aims to develop a knowledge base with a European view on MOOCs through continuous and systematic collection and analysis of data on existing MOOC initiatives to advance scientific understanding of this new phenomenon. The study consists of a series of surveys (in different time periods) of the learners of MOOCs offered by the OpenUpEd partners and other European providers willing to collaborate with the study.