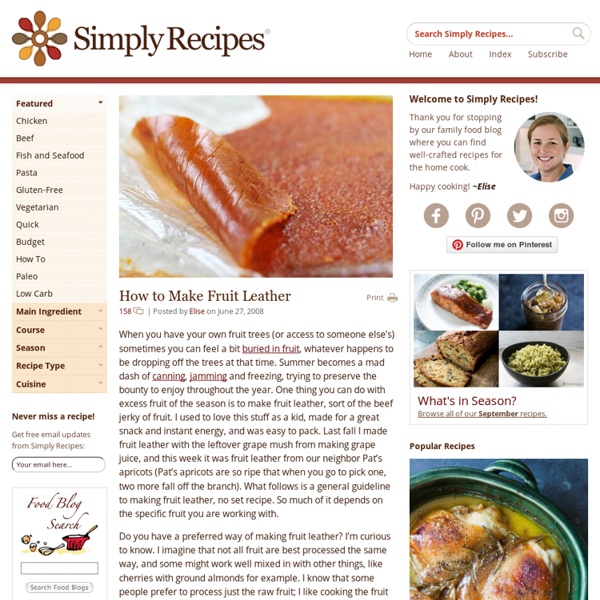 1 Rinse the fruit. If you working with stone fruit, take out the pits, chop the fruit. If working with apples or pears, peel and core them, then chop. If working with grapes, de-stem them. Taste the fruit before proceeding. 2 Place fruit in a large saucepan. Continue to simmer and stir until any added sugar is completely dissolved and the fruit purée has thickened, another 5 or 10 minutes (or more). Note if you are working with grapes - strain the juice out of the mashed grapes to make grape juice. 3 Put the purée through a food mill or chinoise. 4 Line a rimmed baking sheet with sturdy plastic wrap (the kind that is microwave safe). 5 Place the baking sheet in the oven, try to keep any plastic wrap from touch the sides of the oven or the oven racks. Alternatives to the oven. 6 When the fruit leather is ready, you can easily peel it up from the plastic wrap.

classic ice cream sandwiches Look, guys, you’re never going to see my living room on a design blog. As lovely as the walls in landlord-chosen sallow yellow-beige are, as handsome as this coffee table once was (before the finish chipped off the top and we decided to ignore it until it fixed itself), and as charming as the explosion of half-deflated balloons, overturned fire trucks and other toys (some not even wooden, organic, or in sync with our decorating scheme, which, by the way, doesn’t exist) might be, this is hardly the stuff of Pinners’ Envy. Our parties are equally uncoordinated. There are no Mason jar cocktails with homemade bitters, flour sack table runners, or dishes sprinkled with fresh herbs from our window box garden (which also, uh, doesn’t exist, although if you saw the grime that accumulates on our windowsills from the avenue below, you might thank us). We’ve never sent guests home with a party favor aside from a hangover and we usually forget to make coffee at brunch.

Greek Nachos Whole Wheat Pitas This is an incredible Pita tutorial from The Fresh Loaf (much more detailed than mine) 2 cups flour 1 cup whole wheat flour 1 1/2 teaspoons salt 1 Tbl honey 1 packet yeast (or 2 1/2 tsp.) 1 1/4 to 1 1/2 cups water, roughly at room temperature 2 tablespoons olive oil Method Combine the yeast, flour, salt and honey. Preheat the oven to 400*. If you have a baking stone (recommended) place that in the oven at this point as well. Knock You Naked Brownies Goodness. You have to try these. Here’s how it shakes out. Several weeks ago, I was gifted with a tin of brownies. They’re one of the best things I’ve ever tasted. While an official recipe for the Killer Brownies is not available, the classic layered brownie recipe known as “Knock You Naked Brownies” is rumored to be a pretty good match. I decided to whip up a batch over the weekend and see if they measured up. It was all in the name of research, of course. Start by dumping this into a large mixing bowl. What’s “this” you ask? It’s German Chocolate cake mix. Not Devil’s Food. Not Chocolate Fudge. German Chocolate. And if you’re not a cake mix person, don’t worry: because of the way the ingredients are combined, the end result just doesn’t have a box mix flavor. Finely chop up some pecans. You’ll need about a cup of chopped nuts, which you’ll remember is quite different from a cup of nuts, chopped. You’ll also need some melted butter… And some evaporated milk. Then add the butter… And the nuts.

Better Than Takeout Orange Chicken Yesterday as I stood in the kitchen trying to figure out what to make for dinner I wondered to myself, how do those people do it on those shows where they are given random ingredients and are suppose come up with something genius. I think I stood there for a solid 20 minutes looking in the cupboards and staring into the freezer hoping that I would be struck by some ingenious idea. Then I saw the oranges, and it hit me “O-raang Shh-ikun”….that is orange chicken if you can’t understand the accent. I love orange chicken, and I almost always order # 14 Orange Chicken when we order Chinese take out and I wondered to myself if I could make it better at home. This recipe most definitely delivered! The sauce is sweet, tangy, there is no lack in orange flavor, and the red pepper flakes give it just a touch of heat. Combine corn starch, salt, and pepper. As you finish each batch, drain cooked chicken in a paper towel lined plate. Better Than Takeout Orange Chicken Ingredients Chicken 2 eggs, beaten

My Fridge Food - Recipes you already have in your Fridge Braided Spaghetti Bread & The official blog of Americas favorite frozen dough We are carb lovers at our house, so when I saw the Braided Spaghetti Bread recipe in the Rhodes Home Baked Family Favorites with frozen dough cookbook I knew we would love it. This is a really simple recipe; it just takes a little planning for thawing the dough. It will take 2-3 hours for the bread loaf to thaw to room temperature or 1-2 hours for the rolls to thaw to room temperature. You will need: 1 Loaf Rhodes Bread Dough or 12 Rhodes Dinner Rolls, thawed to room temperature6 oz spaghetti, cooked 1 cup thick spaghetti sauce 8 oz mozzarella cheese, cut into 1/2 –inch cubes 1 egg white Parmesan cheese Parsley flakes Spray counter lightly with non-stick cooking spray (or use parchment paper). Roll loaf or combined dinner rolls into a 12x16-inch rectangle. Cook spaghetti according to package instructions. Remove wrap from dough. Make cuts 1 ½-inches apart on long sides of dough to within ½-inch of filling. Begin braid by folding top and bottom strips toward filling. This was fantastic!

Meyer Lemons — The Sweet I have a confession to make: I had a serious case of the jam jitters. Don’t get me wrong. I love jam. In fact, I enjoy it almost every morning, spread thickly on sourdough toast or an English muffin. But I had never made jam. Until now. You see, I was a can-o-phobe. When I won a load of homegrown Meyer lemons from 5 Second Rule’s recent raffle, I wanted to put them to good use. Jam-making veterans had told me how easy it was to do. For years, I had put off trying my hand at jam. Can-o-phobia, I tell ya. So, this recipe was perfect for a neophyte like me. I used a mandolin to slice the Meyers thinly, and then removed all the seeds. My only hitch was that I couldn’t get the boiling mixture up to 230 degrees. As I stared at my jars, looking for all the world like they were imbued with pure sunshine, I admit that I felt proud. Jam jitters? Forget about it. Meyer Lemon and Vanilla Bean Marmalade (Makes about 4 1/2 cups) 1 1/4 pounds Meyer lemons 5 cups water 5 1/2 cups (about) granulated sugar