This drummer is at the wrong gig 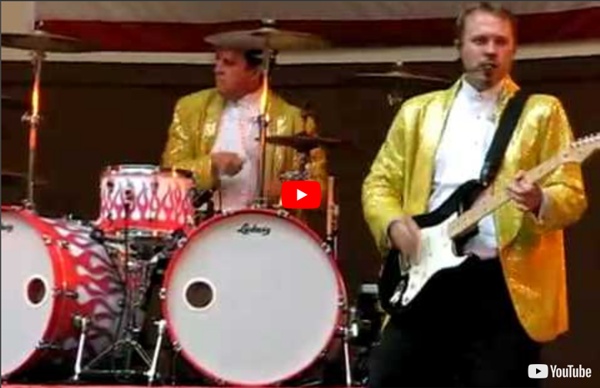 2011 RaceFace Turbine Cranks – 2×10, 3×10, 3×9, Bash Guards and More New for 2011, the RaceFace Turbine Cranks not only come in a few colors, they come in various drivetrain ring combos to match up with whatever you are (or want to be) mashing. They’re forged and CNC’d from 7050 in their well-known and long used I-beam shape, they’re available with 9- or 10-speed chainrings in double and triple formats, or a double with a bash guard. Or, you can just get the crankarms with spider and put whatever rings you want on them. More pics and official PR after the break… From RaceFace: Light enough for XC but strong enough for aggressive all-mountain riding. Brand new for 2011, check out our paradigm-shifting Turbine Cranks. With the Turbines, we’ve got almost every conceivable configuration covered. Regardless of the configuration, all Turbine cranks are painstakingly engineered using ultra high-strength 7050 aluminum, then near-net forged and CNC finished for the aggressive I-Beam profile you’ve come to know and trust from Race Face.

Firefox Friday: Firefox 5, HTML5 games, WebM DRM, and beta updates Like a fiery phoenix rising from the ashes, Firefox Friday is back! Mozilla has been incredibly silent since November, with the only real news being the adoption of two adorable red pandas (firefoxes) at Knoxville Zoo, Tennessee. The entire engineering team has been in crunch mode, churning through as many bugs as possible to get Firefox 4 into shape for late-February or early-March release, and thus, except for beta releases, not a whole lot has happened. Things have been a little more exciting at Mozilla Labs, however. Yes, Firefox 5. Firefox 5 A sly little rumor sneaked out last week: instead of the usual, steady stream of dot releases (4.1, 4.2, 4.3.), Firefox will be moving to a much faster major release cycle (4, 5, 6) -- just like Chrome. But what are the implications? For a browser that has had an annual release cycle for the last five years, a 3- or 4-month release cycle would definitely shake things up. Game On 2010 winners WebM DRM

How Al Jazeera Is Using Promoted Tweets & Trends to Get Into U.S. Markets When protests erupted in Egypt nearly two weeks ago, the government's response was swift and all-encompassing - shut off all forms of communication. One media outlet rose from the ashes to provide consistent live coverage of the events in Egypt - Al-Jazeera. The only problem, however, is that the Qatar-based media outlet isn't available on most cable networks in the U.S. and the company wants to fix that. Like other movements of its kind, and despite the Egyptian government's best efforts, the protests in Egypt gained traction on Twitter with hashtags like #jan25, #cairo, #mubarak and #egypt. Al Jazeera is actually the second media outlet to use a promoted trend or tweet. The Cold U.S. For the most part, the network is completely unavailable in the U.S. "We have no plans to carry Al Jazeera English on DIRECTV at this time," said DirecTV. "We don't have a carriage agreement with Al Jazeera English, but our customers can view this programming for free online. Is It All About The Money?

George W. Bush | Guantanamo Bay Please support our site by enabling javascript to view ads. Former President George W. Bush has canceled a trip to Switzerland after human rights groups threatened legal action over the alleged torture of two men at the Guantanamo Bay detention center in Cuba. Bush was to be the keynote speaker at a Jewish charity gala, Keren Hayesod, on Feb. 12 in Geneva. Criminal complaints against Bush alleging torture have been lodged in Geneva, court officials say. The Center for Constitutional Rights said in a statement that they had planned to bring the complaint under the Convention Against Torture on behalf of two of men, Majid Khan, who remains at Guantanamo Bay, Cuba, and Sami al-Hajj, a former al-Jazeera cameraman who was released in May 2008, according to the Washington Post. Bush has admitted in his memoirs to ordering use of water boarding, an interrogation technique that simulates drowning.

Riding is My Ritalin ADHD and Cycling Riding Is My Ritalin Adam Leibovitz is conducting a groundbreaking experiment that could transform the way doctors treat ADHD: He's pedaling his bicycle. One evening in the late autumn of 1997, Jeff and Lori Leibovitz arrived at Skiles Test Elementary School in Indianapolis for a meeting with their son Adam's first-grade teacher. Jeff and Lori listened in shock. "It was a horror story," Lori recalls. At the time, ADHD diagnoses were exploding across the United States.