Growing mushrooms in a laundry basket 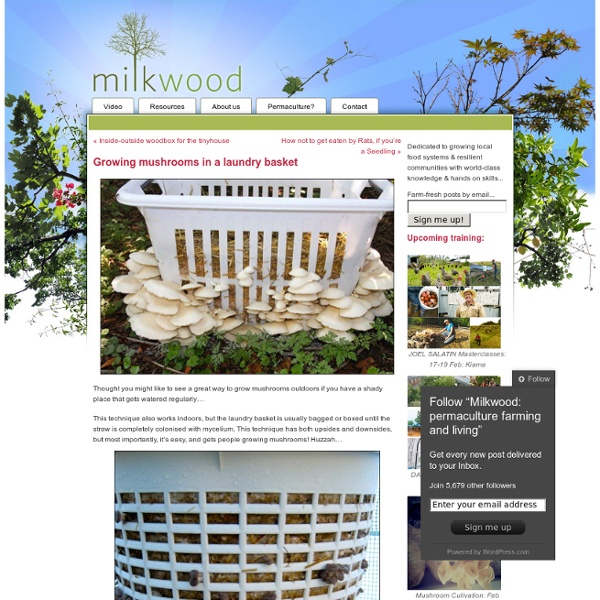 Growing Morel Mushrooms: Multiple Techniques ShareThisFacebookTweetLinkedInPinterestEmail The process of growing morel mushrooms has baffled amateur and professional mycologists for years. Now that we know more about the mysterious morel, growing your own is certainly possible. Reading through the other morel pages on this site before you start will help you better understand their life cycle. Below are a few different ways to grow morels, ranging from easier techniques to more difficult. Click here to share a morel growing story with visitors to this page! The Grow Kit and Spawn Method One of the most popular ways of growing morel mushrooms is with purchased spawn. Mushroom spawn is simply the mycelium, or "vegetative growth" of the mushroom, and the material on which it was grown. This mycelium-infused material is then used to inoculate larger batches of substrate to create a mushroom bed. The easiest way to get spawn is by purchasing a morel mushroom kit, which you can do online. Follow the instructions that come with your kit. Wait:

Mushroom Garden Patches by Terri Marie Beauséjour Copyright 1999, all rights reserved. Have you ever considered growing mushrooms in your garden? A wide variety of fungi possess qualities of edibility and/or aesthetic beauty appropriate for both the flower and kitchen gardens, or even for general landscaping. They may be grown with no greater effort than that required for plants. In fact, many varieties will thrive nicely with little or no maintenance. Agaricus species (the Portobello, the Prince, the Horse Mushroom, etc.) are adaptable to grassy areas among trees. Edible Tricholomas growing in a Garden in Thailand. Intrigued? You should begin by taking a fresh view of your garden or landscape from a new perspective; analyze its "fungamentals." Note conditions of sun and shade, wind and humidity. Once you have considered the possibilities, you should determine what mushroom varieties are suitable and desirable. Coprinus comatus The delicious Shaggy Mane. Macrolepiota procera and M. rachodes Lepista nuda Sources

Mycology Resources Fatguy's Agar Technique Agar inoculation has been used for cultivation mushrooms as well as bacteria and molds for several years. The key to using an agar solution in cultivating mushrooms is sterility. Keeping the work surface and your hands clean and free of contaminants is the most important thing in using agar. Choosing an agar solution to work with should be pretty easy. Agar production and pouring I use a Malt Extract Agar (MEA) solution that is shipped to me in a powder form. -Mix 50 grams of MEA (7 Tablespoons) for each liter of water. You can use a Mason Jar as a container to mix and autoclave the solution. Here is an important point: Unless you have a container that will hold about 2 liters of solution for each liter that you want to make, I would suggest that you make 1/2 liter batches of the agar solution. When the 45 minutes is up, slowly and carefully lower the heat and the pressure of the pressure canner. Here are a few points regarding the pouring of the plates.. Inoculation Time The spore print:

Growth on Agar Perhaps this will be the year when you devote a corner of your garden to growing your own portabellas, criminis, shitakes, shaggy manes, Lepiotas, oysters, enokitakes. In this column we will give a basic outline of mushroom cultivation techniques and try to answer your questions about cultivation. Each article will briefly cover a different aspect of mushroom cultivation: I hope cultivation corner will provide stimulus and help you establish your own cultivation corner. Happy hunting and growing! I. The first phase of mushroom cultivation is the isolation of a pure culture of mycelium. PD(Y)A should be sterilized for 45 minutes at 15 pounds pressure. Potato Dextrose (Yeast) Agar (PD(Y)A): Potato Water 1 liter Dextrose 10 grams Nutritional Yeast or Yeast Extract 1-3 grams (optional) Agar- agar 20 grams Potato water is prepared by boiling a large, washed but not peeled, thinly sliced potato in water for one hour. Commonly used spore isolation techniques include: A. B.

Coffee Grinds to Mushrooms: A How to Guide | LunarHarvest Yup. I’m not pulling your leg and I’m not kidding you around; oyster mushrooms (Pleurotus ostreatus) are a species of fungus that can digest coffee grinds, including the filters that they are often discarded with, and produce reliable crops of mushrooms. I was skeptical at first but after doing what seemed to be no more than a month casually searching through online do-it-yourself blogs and investigating companies which distribute mushroom kits and spawn (such as The Mushroom Patch) I had the confidence to give it a shot. Approximately one month after mixing together the coffee grinds and mycelium together, the oyster mushrooms are well into their first flush. But why would you want to grow your own mushrooms? Plus you are not just creating any old edible material (Because edible material sounds really appetizing..) but oyster mushrooms, which are delicious and extremely good for you. Step 1. Chances are, there is a coffee shop near where you live. Now all you need is a bucket.

Mushroomers ClubA Successful Story of Blue Oyster and Shiitake Mushrooms Cultivation ~ mushroomers club This is a guest post by Devon Olsen, an active member of forums (permies.com and shroomotopia.net) on permaculture and fungi cultivation. This is the story of his first attempts in cultivating Blue Oyster and Shiitake mushrooms. His story is interesting and was posted here with the intention to help some people out there in their first trials of cultivating such types of mushrooms. I guess mushrooms have always been kinda cool, but ive never really felt fascinated about them per se, but about a year ago i found a thread on permies.com about growing Oyster Mushrooms on an old phone book i think it was. Seeing those Oyster pins fascinated me, so i decided at that point to look into growing some of my own. Learn more about Oyster mushroom cultivation reading How To Grow Oyster Mushrooms on Logs or the simple plastic bag cultivation of oyster mushrooms by checking my post How To Transform Paper Into Food there you'll find links to a more detailed cultivation method of oyster mushrooms.

Gourmet mushrooms in an old coffee cup The best part about this project is that it is dead simple and most of the materials can be acquired easily and for free. Really all you need is: Empty coffee cup(s) Enough coffee grounds to fill your cups Oyster mushroom spawn I'll assume you can manage to scare up some empty coffee cups. Ideally you want the little plastic lid part as well. It will make things simpler. Coffee grounds are really easy to procure. The mushroom spawn is something that you will probably have to buy.

Easiest Methods of Growing Mushrooms, low tech cultivation techniques ~ Internet Web Links These are internet web links to the easiest methods for growing mushrooms for the home hobbiest, and the small commercial mushroom cultivator for local markets. Included are the Hydrogen-Peroxide Method, Growing from Kits, Acquiring Spawn, and Building a Small Home Culture Setup. Each listing includes a link followed by a brief extract from the page listed. Growing Mushrooms the Easy Way Home Mushroom Cultivation with Hydrogen Peroxide An instruction manual in two volumes based on a new concept in mushroom cultivation, by R.R. Mushroom growing - a great pastime, but... Simplify! Growing Mushrooms the Easy Way I performed my first experiments to test the peroxide idea in 1993, and it worked. Grow mushroom cultures in an ordinary room. Handle cultures in the open air in a kitchen or non-sterile workshop. Protect cultures from bacteria, yeast, mold, and mushroom spores. Prepare mushroom cultures without an autoclave.

Mushroomers ClubGrowing Mushrooms The Easy Way With Hydrogen Peroxide ~ mushroomers club What Is Hydrogen Peroxide and Why is it Used in Mushroom Cultivation? According to Wikipedia, hydrogen peroxide is a clear and odorless liquid similar to water with a strong oxidizing capacity. Due to its oxidizing properties it is used as a bleach or cleaning agent. For consumers, it is usually available from pharmacies at 3 and 6wt% concentrations. Commercial grades from 70 to 98% are also available, but the latter require special care and dedicated storage. between 3%-8% it is used to bleach human hairused to whiten bones6% is useful for disinfecting cuts and to stop bleeding in superficial cutsit can be used to clean tile and grout on floorsat a concentration of 35% it is used as an antimicrobial agentetc. Hydrogen peroxide in a certain concentration proved to be efficient in killing living cells and it is currently used against contaminants found in the compost designed for mushroom cultivation. Randall R. Randall's DirectionsA. C. Conclusion Your Turn

Peroxide in Mushroom Growing FAQs Click the link, or scroll down the page. What are the additional advantages of using peroxide in mushroom cultivation? With peroxide, you can make sawdust spawn medium from wood pellet fuel with just a ten minute steaming, rather than pressure sterilization. This is one of the fastest methods of making mushroom spawn yet devised. The spawn can then be grown on a bookshelf in your home, rather than in a sterile laboratory. And, the amount of spawn you can make isn't limited by the size of your pressure cooker, since you can use any of a variety of large pots with fitted lids instead. With peroxide, you can prepare sawdust cultures without pressure sterilizing either the bulk substrate or the supplements. Peroxide can do away with costly filter-patch culture bags for bulk substrate. Added peroxide keeps cultures from going anaerobic (breakdown of the added peroxide by the mushroom mycelium releases oxygen). Peroxide kills contaminants without encouraging new resistant strains. Yes. Yes.