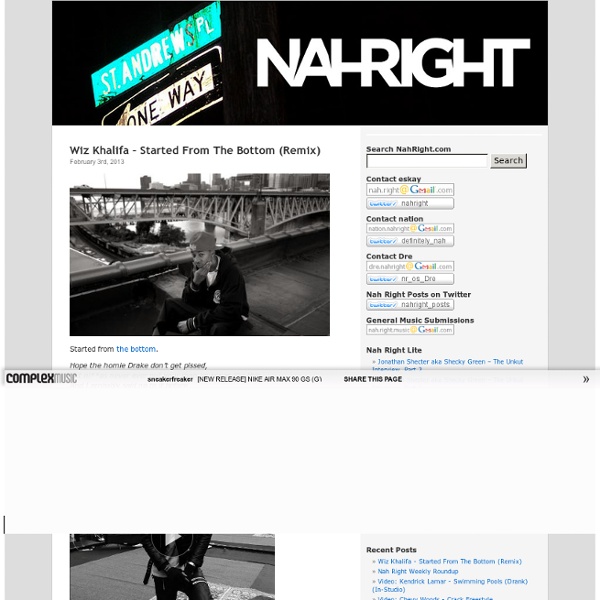 The holidays can be hectic, especially when you’re a family man with young children and local in-laws. But I was lucky enough to find some time for myself after my wife and kids were asleep the other night to dig through my production archives and listen to some old loops I had stashed away (yes, I’m a rap artist too, or at least I used to be haha). While going through them, I found a few I thought would be cool to share as a personal introduction to a new series we’re kicking off in 2014 called Loop Library, where we ask producers to come up off some gems from their stash. Check out five of my favorite unused loops I had tucked away below. Click to Read: Loop Library with NahRight’s Stan Ipcus Previously: Sample Stories with Bob James

Smokin' and Bloggin' Producer/rapper Hit-boy releases a new track Grindin’ My Whole Life featuring n.no, B. Carr, Big Hit, Audio Push, Bmactthequeen, and Kent M$ney. This cut will appear on the HS87 compilation project We The Plug, due out this year. Read More While we await the release of Logic’s While You Wait EP, the VMG artist keeps the anticipation going with releasing a collaboration between him and Big Sean titled Aright. Check out the Tae Beats produced cut below.

Withoutabox The Declaration of Independents With this revolutionary suite of online tools, Withoutabox declares all members of the film community to be free from restrictive distribution channels. Withoutabox grants the power to simply and economically manage the entire process — from production to festivals to distribution to connecting with fans — and the inalienable right to enjoy all artistic and financial rewards to which one is entitled. Go forth, © Copyright 2007 Native Instruments Maschine v1.5 update review - by Chris Cartledge - June 2009 Reviewer: Chris Cartledge • Date: August 2010 • Price: £475/$599/€575 • Link:NI Introduction When I reviewed Maschine's initial incarnation over a year ago, there was no single thing on the market that did what it did. Fast forward to today… and there still isn't. Not content, however, with carving a niche and sitting smugly inside it, Native Instruments have listened to user criticisms and suggestions and delivered a substantial update – free of charge. The result is a more impressive, mature, useful, and admittedly power hungry animal, and I've enjoyed putting Maschine 1.5 through its paces immensely.

Interviews Nightclub Doorman Confesses Nightlife Secrets City Never Sleeps gets a few doormen to confess the secrets of the nightlife. For confidential reasons we can not disclose their names or workplace. Building a custom HTML5 video player with CSS3 and jQuery - Opera Developer Community By Ionut Colceriu Introduction The HTML5 <video> element is already supported by most modern browsers, and even IE has support announced for version 9. There are many advantages of having video embedded natively in the browser (covered in the article Introduction to HTML5 video by Bruce Lawson), so many developers are trying to use it as soon as possible. There are a couple of barriers to this that remain, most notably the problem of which codecs are supported in each browser, with a disagreement between Opera/Firefox and IE/Safari.

A rare encounter with Madlib An extended edit of the interview that first appeared in the December issue of Dazed & Confused: Madlib, one of the most prolific producers of the last 20 years, has cooked up classics for Mos Def, DOOM, Erykah Badu, J Dilla, Lootpack and Ghostface Killah, as well as diverse solo records under aliases such as Quasimoto, the Beat Konducta and Yesterdays New Quintet. His oblique approach to sampling has influenced everyone from Flying Lotus to Thom Yorke, yet the 40-year-old reckons that the world has only heard 30 per cent of his life’s work, with the rest lying unreleased on tapes and CDs in his LA studio.

Soletron Warning: mysql_connect() [function.mysql-connect]: User st70234_latest already has more than 'max_user_connections' active connections in /home/st70234/public_html/wp-includes/wp-db.php on line 1143 This either means that the username and password information in your wp-config.php file is incorrect or we can't contact the database server at localhost. This could mean your host's database server is down. Are you sure you have the correct username and password?

Fate of Universe revealed by galactic lens 19 August 2010Last updated at 19:33 By Howard Falcon-Lang Science reporter The huge galactic cluster known as Abell 1689 acted as a cosmic magnifying glass A "galactic lens" has revealed that the Universe will probably expand forever. Astronomers used the way that light from distant stars was distorted by a huge galactic cluster known as Abell 1689 to work out the amount of dark energy in the cosmos. Dark energy is a mysterious force that speeds up the expansion of the Universe. Understanding the distribution of this force revealed that the likely fate of the Universe was to keep on expanding.

CB We Opened a Record Shop June 19th, 2015 My friend 12manrambo and I just opened a small record store here in Oakland, CA. Madlib In the shop: FREDDIE GIBBS & MADLIB – PINATA | iTunes: PIÑATA Freddie Gibbs is the product of violent, drug-laden streets, but unlike most rappers with similar resumes, he brings the block to the booth without inhibition or an exaggerated rap persona. Pinata, a 17-track collaboration with producer Madlib, is the best distillation yet of his transparent approach to making music, combining stark honesty with electrifying talent as a lyricist and performer. Pinata is “a gangster Blaxploitation film on wax,” Gibbs says, and the full-length result of a process that began in 2009.

The Main Hustler Rule is - Don’t Blow Your Cool: Searching for the roots of rap Riverhorse Media’s Michael Todd talks about making a film on the seminal 1973 album Hustlers Convention. In his search for the roots of rap, he discovers that not only is this journey important, but exactly why that is. My journey started nearly twenty years ago. Off Franklin – A Tumblr theme made with media in mind - Some Random Dude Content friendly The interface was designed to work well with all forms of Tumblr content. The interface is intended to simply stay out of the way on a post’s individual page. Posts with content small or large work just fine. Easy customization Superlative Hip Hop Items - Superlative Magazine Search Folge uns! Superlative Magazine ist ein Online Lifestyle Magazin über Streetwear, Design, Places, Food, Streetart, Skateboarding & Hamburg. Superlative Magazine ist die große Schwester des Blogs Superlative Hamburg