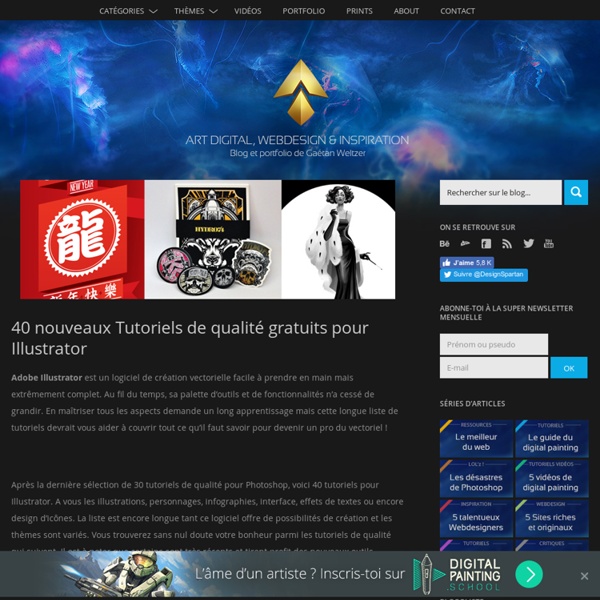 Design a Coffee Shop Menu Layout from Scratch with Photoshop and InDesign – Part 2 This is the second part of this tutorial series about creating a ready to print booklet menu for an imaginary coffee shop named "Violet Coffee." In this final part of the two part series, you'll learn to create a ready to print booklet on InDesign, work with master pages, text, tabs, paragraph and character styles, import external files and actually print the booklet. Let's move on!

40 Tutorials for Outstanding Text Effects in Illustrator Fuzzy, sketchy, bubbly, viscous, sleek, shiny, retro, futuristic: you can do it all in Adobe Illustrator. In this showcase, we have collected 40 tutorials that show you how to create awesome typographic effects in Illustrator, step by step. Some of these tutorials require the use of Photoshop for finer details. With these tutorials, you’ll learn how to create these typographic masterpieces and develop the skills to apply them to your own personal creations. If you know of any other great tutorials for text effects in Illustrator, please share them with us in the comments at the end of the article. Create a Variety of 3-D Lettering Effects for Poster Design In this tutorial, the artist showcases three approaches to creating simple 3-D lettering effects for posters.

How to Create a Cartoon House in Illustrator Final Image Preview This Adobe Illustrator tutorial is not very difficult but still it is designed for those who know Adobe Illustrator at least a little bit. I will show you how I draw the elements of vector scene. Back-to-School With 40 Excellent Adobe Illustrator Tutorials Advertisement Learning is a process which continues throughout the life of an artist, graphic designer, and illustrator. Along the way, designers find the task of mastering Adobe Illustrator a large obstacle which requires practice and experience in using the vector-based application. Practice comes in the form of tutorials, which offer tips, tricks, and artistic styles from other designers who have mastered certain techniques based on their experience. From these tutorials, a designer can polish their skillsets on a variety of topics which will strengthen their own artwork. Sometimes a simple tutorial has tips which may have been overlooked based on the subject of the tutorial.

125+ Ultimate Round-Up of Illustrator Tutorials When it comes to web and graphic design, Adobe Illustrator is usually the primary option to consider. However, the software package itself is a quite hard to learn — and extremely hard to master. Why I need to look any Illustrator tutorial? Out of many reasons there are three reasons for simple explanations. Design Process of Koi Illustration It has been a while since the last time I've done any illustration work. Recently I've created a new awesome piece that I would like to share with you. It is a koi fish illustration inspired by my tattoo. Read this post to find out more about my tattoo and see how I created the koi fish illustration based on my tattoo. Final Illustration Preview

Vector Polishing Techniques Someone emailed me and asked how did I do the illustration background on Next2Friends. It inspired me to write this article. He asked "Did I do it in Photoshop or Illustrator?" Well, it is a mixture of both. First I created the artwork in Illustrator, then polished it in Photoshop.

Tag "Illustrator" on Smashing Magazine People often ask how I arrived at a finished illustration. Honestly, it’s different every time, but it always starts with a hand-drawn sketch. Sometimes, I paint it completely by hand; sometimes I’ll scan in a pencil drawing. Many of my pieces are 100% analog that I’ll show only at shops or galleries. Use anything you can; if the illustration would work as a wood carving, go that route. There are concrete steps one can take, but they certainly don’t have to be the same every time. Illustrator's Live Trace: Sketch to Vector Advertisement In this post we will take a drawn design, scan it and clean it up in Photoshop, then trace it using the Live Trace feature in Adobe Illustrator. Live Trace was introduced in Adobe Illustrator CS2 but is still a powerful tool available in Illustrator CS5.