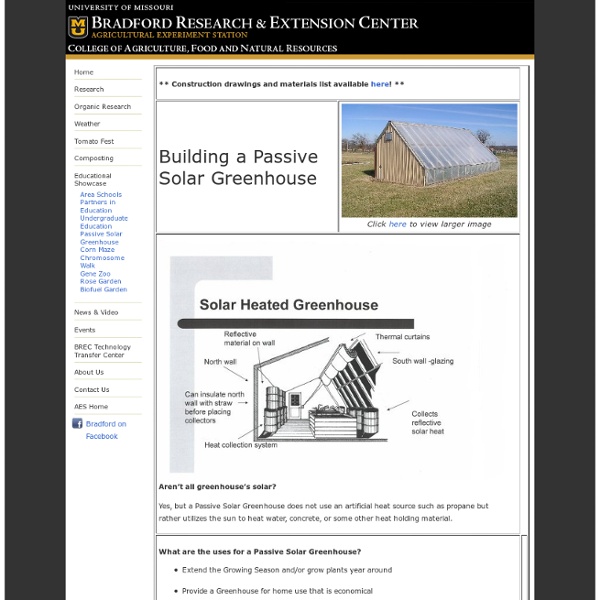 FreestyleFarm » “Just winging it in the city” Caterpillar tunnel: An inexpensive variation on the hoophouse theme - Growing for Market Growing for Market is THE trade magazine for market farmers! Available in print or online, it is published 10 times per year and features practical, how-to articles written by growers from all over the U.S. and Canada. Click here to learn more about subscriptions options. By Lynn Byczynski Among the many season extension structures in use on vegetable farms today, one of the least expensive is the caterpillar tunnel. Caterpillars are easy to build and move. Caterpillars are used for many crops and many purposes. This article will focus on growing summer crops, including cucumbers, tomatoes, eggplants, and flowers in a caterpillar tunnel. Building a caterpillarThe hoops for a caterpillar tunnel can be galvanized steel, electrical conduit or pvc. Anne and Eric Nordell of Beech Grove Farm in Trout Run, Pennsylvania, use caterpillars on their farm. Cucumbers and tomatoesThe Nordells have a short season at their farm in the mountaints. Copyright Fairplain Publications Inc.

Masanobu Fukuoka's Natural Farming and Permaculture | Permaculture & Alcohol Can Be A Gas Masanobu Fukuoka is a farmer/philosopher who lives on the Island of Shikoku, in southern Japan. His farming technique requires no machines, no chemicals and very little weeding. He does not plow the soil or use prepared compost and yet the condition of the soil in his orchards and fields improve each year. How is this possible? I had not heard of permaculture at the time, but I can see now that Fukuoka's farm is a classic working model of permaculture design. Mollison and Fukuoka took entirely different routes to get to essentially the same place. The key word here is design. The idea for natural farming came to Fukuoka when he was about twenty five years old. But where to begin? The basic idea for his rice growing came to him one day when he happened to pass an old field which had been left unused and unplowed for many years. This is not to say that Fukuoka did not experiment. His vegetable growing also reflects this idea. Zone 2 is his grain fields. Zone 3 is the orchard. Larry Korn

You Should Judge a Greenhouse by its Cover; Your Plants Will By Michelle Moore Summary: Explore the pros and cons of various greenhouse covering choices as well as greenhouse paneling features that should be considered before buying a greenhouse. A handy checklist follows the article. At the 1851 Great Exposition in Hyde Park London, England, visitors gathered at the Crystal Palace from around the world. Greenhouses have long been a status symbol in Europe and are often inspired by grand creations such as the Crystal Palace. Many of the greenhouse books, while excellent, are written by English authors and refer to “growing under glass”. What makes a good greenhouse covering? Once you have answered the questions at the end of the article, it is easier to prioritize the primary attributes you will need in a covering. Insulation - How will does the greenhouse covering hold in the heat? The primary function of a greenhouse is to trap solar radiation from the sun in an enclosed area. Not all light is the same, just ask any photographer. Cost/Value

Build a Compost Toilet, Ladies Urinal & Solar Shower from Recycled Materials Stuart Aylett left his job in the building trade over ten years ago and headed west to find a simpler life. After landing in Somerset, he bought a half acre of land at Stonage Lane in 2009 and attempted to rejuvenate his newly acquired monoculture of rye grass into a yield-producing paradise. In March 2012 he moved into a second-hand caravan on the plot, now known as Stonage Organics, and began work on the new compost toilet system that is the focus of this article. Step one: Building the Humanure compost toilet and hand washing facility Having decided to use the humanure system of composting human waste, Stuart built a compost toilet structure, which also incorporates a ladies urinal and hand-wash facility. The structural timber and cladding utilises milled wood from a local sustainable woodland project, while pallets and water butts were recycled from a local farm. main structure from locally sourced heavy timbers with simple jointing Step two: The solar shower About the author

Wall O’ Water, 3-Pack - Garden Harvest Supply Inc Wall O Water Plant Protectors and Season Extenders Wall O' Water plant protectors will keep your plants growing with temps down to 16°F. Gardeners may be concerned that it is too cold at night if you plant 2 months before the last frost—but cold is good. You want it to freeze, as that is what makes the Plant Protector work. When the water in the Plant Protector freezes at night, it gives off 1.8 million calories of heat—half of which stays inside and keeps the plant warm. How to use the Wall O Water Plant Protector: Use an empty 5-gallon bucket as a frame to set up the empty Plant Protector, and then simply fill the tubes with water. Earthbag homes--easiest and cheapest green build - Greenville Green Building Earthbag construction is a type of rammed earth construction where durable bags, usually polypropylene or burlap, are filled with local earth or other materials, laid in courses and tamped down into place to form walls. The greatest advantage is that it is one of the cheapest and easiest ways to construct a green home which with some hard work can be done by the homeowner. Other advantages of earthbag homes are that the walls are so substantial that they are severe weather and natural disaster resistant including earthquakes, hurricanes, floods and even bullets. Architect Nader Khalili under supervision of the International Conference of Building Officials tested earthbag structures simulating seismic, wind and snow loads, and the tests surpassed the rigorous 1991 Uniform Building Code requirements by 200 percent. Earthbag homes can be built easily in remote areas where skilled construction labor may not be available since almost anyone with some simple instruction can help.

Solar Rooms Search The Renewable Energy site for Do-It-Yourselfers Without ventilation or thermal mass, the temperatures of spaces having large areas of south-facing windows will fluctuate widely. Temperatures of conventional non-solar greenhouses, for example, can rise to over 100° on sunny winter days and then drop to below freezing at night. If a sun heated room is permitted to have wider-than-normal temperature fluctuation, then the costs of thermal mass (to store heat) and movable insulation (to reduce heat loss) are avoided. The excess warmth from such a "solar room" can heat the house immediately, or if mass is added, heat can be stored for later use after the sun sets. Greenhouses are the most common solar rooms. A solar greenhouse is designed both to maximize solar gain and to minimize heat loss. For maximum sunshine, and for minimum heat loss at night, movable insulation is used in combination with double glazing. Which Direction? Heat Storage Costs Large Solar Rooms

Films For Action Presents: The Top 100 Documentaries Inspiring the Shift to a Sustainable Paradigm By Films For Action / filmsforaction.org Film offers us a powerful tool to shift awareness and inspire action. By hosting community film screenings and sharing them online, they offer a method to break our dependence on the mainstream media and become the media ourselves. Just imagine what could become possible if an entire city had seen just one of the documentaries below. Creating a better world really does start with an informed citizenry, and there's lots of subject matter to cover. Our society needs a new story to belong to. But most of all, we need to see the promise of the alternatives - we need to be able to imagine new exciting ways that people could live, better than anything that the old paradigm could ever dream of providing. And all of this knowledge and introspection, dreaming, questioning, and discovery is essential for a cultural transformation that addresses root causes. So take this library of films and use it. Community Suggestions Living Without Money (trailer)

List of companion plants Dill is one of the few plants to grow with Fennel This is a list of companion plants. Many more are in the list of beneficial weeds. Vegetables[edit] Fruit[edit] Herbs[edit] Flowers[edit] Other[edit] See also[edit] References[edit] External links[edit] Further reading[edit] Cunningham, Sally Jean.