Rule of Three – The Copywriting Studio 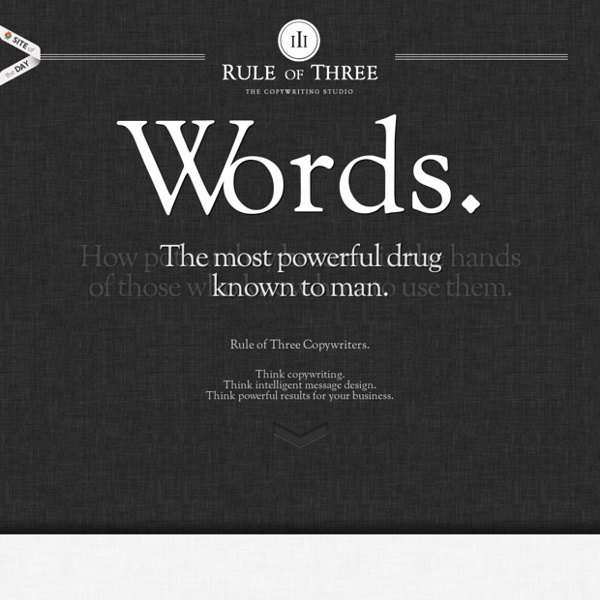 Pitchdeck Revolutionizing the way people discover, share, and interact with images online. Inspired by Google Images, Flipboard and Pinterest Piccsy embodies all of the redeeming qualities these products provide, plus so much more. Traffic Jess & Russ She bought a Smashing Pumpkins album, painted stars on her bedroom ceiling, and felt emotional. He kissed a real girl at the annual latin camp dance social. Spoiler alert: he didn't marry her. Almost four years ago, fate and a few mouse clicks brought Russ Maschmeyer and Jessica Hische together. They went from complete strangers to inseparable companions in work and love. This is how it all began.

Optimizing Copy: The 7 most common copywriting mistakes we see marketers make There’s a lot of bunk information out there about copywriting. The barrier to entry for being an “expert copywriter” is pretty low and some of those crossing that barrier are simply wrong when they give advice. Don’t get me wrong, there are some great copywriters out there. What’s funny though is that most of us here at MarketingExperiments wouldn’t claim to be one of them (even the great Daniel Burstein). But what we lack in copywriting prowess, we gain in mountains of research on copy that works and doesn’t work.

Sticky Content blog 17 April 2014 The all-too-common issue of Frankencontent – content whose effectiveness has been undermined by excessive, uncoordinated stakeholder input – takes on a whole new dimension of horror when it comes to localisation, writes Yusuf Bhana of 11 April 2014 If you feel like you’re sinking in a world of content with too much to do and nowhere to begin, it’s time you got to grips with a content audit. Intacto 2013 FLAT DESIGN vs REALISM Create a One-Page Retro Web Design Layout in Photoshop In this tutorial we will explain how to create a one-page retro web design using Adobe Photoshop. While most of the design is created in Photoshop, we will also use Illustrator to create various shapes and elements. Let's get started! This tutorial was a collaboration with Ciursa Ionut. Tutorial Assets The following assets were used during the production of this tutorial.

Copywriting blogs you should be reading today A few months ago on my Pro Copy Tips blog, I published a short list of copywriting blogs that offer sound and often entertaining advice. That post got a fair number of comments and tweets, so I thought it would be worthwhile to re-post it here. A few people emailed me and wondered why I didn’t include this or that blog. One or two people were insulted. But I assure you, this isn’t meant to be a list of the only copywriting blogs, just a list of some of my favorites which I think are worth reading. So if you don’t see your blog of choice, don’t get your panties in a twist. About Us SoBuzzMe, LLC, derived from Social Buzz Media, is a technology services Company that focuses on three specific areas: →Digital Marketing→Cloud Solutions→IT Support Basically, we’re battle-tested geeks for hire. Our team is driven to create solutions that are easy to understand and that maximize the benefit and ROI for our clients.

The Rise of Green Gamification Who said going green had to be boring? Maybe the same people who believe games are just entertainment. Both myths are being shattered by the growing phenomenon of green gamification – the use of games to make sustainability fun and rewarding. The growth of green gamification is being accelerated by forces ranging from the government’s Green Button promotion of energy usage data to the digital generation’s strong desire for smartphone apps that allow them to manage resource consumption. Most decade-specific words in Billboard popular song titles, 1890-2014 Chart first, then explanation (click to enlarge): The inspiration for this post came from my being too lazy to set my iPod to shuffle, and then noticing it played a bunch of songs in a row from the 1930s and '40s that started with the letters "in" ("In the Wee Small Hours of the Morning," "In the Still of the Night", etc.) Naturally, being a data nerd, my first thought was to quantify the phenomenon. The data comes not from Billboard itself, but from www.bullfrogspond.com; I don't know much about the data source, but it certainly looks thorough and painstaking, and up to date. If you'd like to know a little more about my methodology (like a quick explanation of the metric, "keyness"), see the code I used and/or see the actual songs that correspond to these words, head on over to my other, nerdier blog, prooffreaderplus.

The Many Faces Of… Leonardo DiCaprio Are you being chased by shadows? Is reality being called into question by strange circumstances? Do you regularly fall into CGI-enhanced flashback sequences? Wildfire Creative Sight – a glimpse of the future? A while back I got interested in gamification (or use of game mechanics or game dynamics) as a way of driving participation and engagement in projects and campaigns. There are many great examples that show how the use of gamification can generate positive change, from encouraging people to recycle or engage with their communities. However there is also a lurking dark side to gamification as people become more and more reliant on technology to run their lives, and nothing puts it as clearly as this film. Created by Eran May-raz and Daniel Lazo, Sight takes us into a wild, dark future where gamification has taken over every aspect of society from cooking food to dating! The Recycling Game

Festival - International Digital Festival - Accueil Still looking for teams for KIKK Kontest We are still looking for teams to participate to KIKK Kontest, a 24h non-stop multidisciplinary kontest taking place on at the venu of the festival and lasting during the whole event. There are more than 6000 € worth of prizes to win; a trip to Resonate Festival in Serbia, Adobe Suites, Wacom tablets, 500 € in cash, 1 year of Mobile Vikings phone membership with data, and many more… Register now! A few places left for Friday's workshops

Startup Giraffe We’re looking for software engineers to join us in building the highest performing motorcycle ever: mission-motorcycles.com. Our ultimate goal is to replace gas engines with electric across the entire planet, starting with the most difficult transportation vertical – high performance motorcycles. We’re building a ton of really cool software including an OS for the bike itself, fleet management software, mobile … Making Stuff Smarter With Android I’m sure some people would say that the digital revolution is already over. Almost all telephony is digital now.