John Underkoffler points to the future of UI 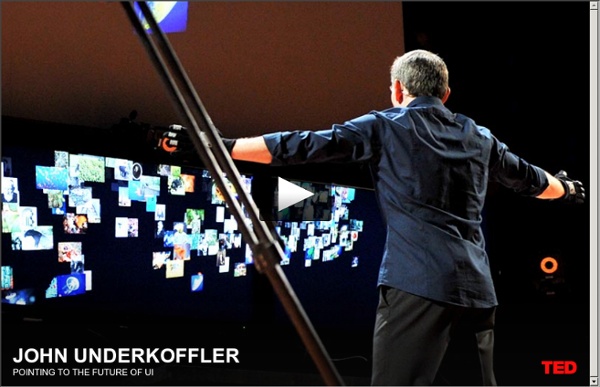 Chris Jordan - Midway On Midway Atoll, a remote cluster of islands more than 2000 miles from the nearest continent, the detritus of our mass consumption surfaces in an astonishing place: inside the stomachs of thousands of dead baby albatrosses. The nesting chicks are fed lethal quantities of plastic by their parents, who mistake the floating trash for food as they forage over the vast polluted Pacific Ocean. For me, kneeling over their carcasses is like looking into a macabre mirror. These birds reflect back an appallingly emblematic result of the collective trance of our consumerism and runaway industrial growth.

Prototyping: Picking the Right Tool By Todd Zaki Warfel, Messagefirst Originally published: Mar 18, 2010 Editor's note: This article is a chapter from Todd's book Prototyping: A Practitioner's Guide. In 2008, I ran the first survey on prototyping for this book. My goal was to understand what tools UX people are using for prototyping, why they’re using those tools, and what they want from those tools. Graphene loudspeaker could rival commercial speakers and earphones Researchers in the US have made a graphene loudspeaker that has an excellent frequency response across the entire audio frequency range (20 Hz–20 kHz). While the speaker has no specific design, it is already as good as, or even better than, certain commercial speakers and earphones in terms of both frequency response and power consumption. Loudspeakers work by vibrating a thin diaphragm. These vibrations then create pressure waves in surrounding air that produce different sounds depending on their frequency.

20 Ways to Use Augmented Reality in Education Second Life proved an incredibly valuable tool for educators hoping to reach a broad audience — or offering even more ways to learn for their own bands of students. Augmented Reality Development Lab: Affiliated with Google, Microsoft, and Logitech, the Augmented Reality Development Lab run by Digital Tech Frontier seeks to draw up projects that entertain as well as educate. The very core goal of the ARDL involves creating interactive, three-dimensional objects for studying purposes. Reliving the Revolution: Karen Schrier harnessed GPS and Pocket PCs to bring the Battle of Lexington to her students through the Reliving the Revolution game, an AR experiment exploring some of the mysteries still shrouding the event — like who shot first!

Usage Patterns for Gaelyk Using Groovy on Google App Engine is relatively simple due to Groovy’s compatibility with Java. However, until recently, the framework support has been lacking. Grails now supports GAE through the use of the app-engine plugin and the gorm-jpa plugin. However, in many cases this can be a little heavy weight. Much of the GORM functionality is also lost because of GAE’s usage of a NoSQL datastore and the limitations of JPA. Gaelyk is quickly emerging as one of best frameworks for development on Google App Engine. The Future of Self-Improvement, Part I: Grit Is More Important Than Talent In the late ’60s, Stanford psychologist Walter Mischel performed a now-iconic experiment called the Marshmallow Test, which analyzed the ability of four year olds to exhibit “delayed gratification.” Here’s what happened: Each child was brought into the room and sat down at a table with a delicious treat on it (maybe a marshmallow, maybe a donut). The scientists told the children that they could have a treat now, or, if they waited 15 minutes, they could have two treats. All of the children wanted to wait.

Download "Hacktivism & The Future of Political Participation" May 10, 2006 I'm making my complete dissertation, Hacktivism and the Future of Political Participation, available for download as of today. Depending on your interests, you might want to download the complete manuscript (284 pages) or to look at selected chapters: You can still access chapter summaries and references (with hyperlinks to sources, where available) by using the drop-down menu at top left. Getting Started with Git and GitHub on Windows - Kyle Cordes (Update: I have a new, related post about the Best Git GUIs for Windows.) I’ve been attracted to, and trying out, various distributed source control tools for the last two years, and have come to the conclusion that the most likely “winner” is Git. Git does a great many things right, good progress is being made in the few areas it is weak, and it has rapidly growing popularity. There are many web sites with extensive information about using Git, learning Git, Git integration, and more. For new Oasis Digital projects, we will generally Git rather than SVN for source control.

RSS and Twitter news feeds from the Financial Times FT.com RSS feed terms of use You may download our RSS feeds and view them for your personal use. We currently publish headlines and teaser text within our RSS feeds. You may also make an RSS feed available to third parties, users within an organisation you work for or users of a website that you publish, on condition that you comply with our Terms & Conditions and that you: Microsoft turns over all Win7 and server source code to Russia&#039;s new KGB It seems absurd. Microsoft, America's preeminent software maker, provides the operating system for more than 90% of the world's computers -- including those used by the U.S. Government. Microsoft has always carefully protected the source code to its operating systems. In fact, a key distinction between the various Windows variants and open source OSs like Linux and BSD is that Linux and BSD are open source.

.CSV » new developments in AI Thanks to popular culture, we have a good idea of what to expect when “strong” AI arrives. Machines attain consciousness? Prepare to be harvested as food. Detroit introduces talking cars? The Science of Learning: Best Approaches for Your Brain Do you wonder why people don’t understand the idea you’re trying to get across in a meeting? Are you mentoring another developer and struggling to understand why the still don’t get it? Do you run training courses and wonder why the attendees only learn 10% of the material? We are all teachers whether as informal mentors, coaches, trainers or parents. Yet only professional educators receive training in this area. Nearly two years ago I started reading neuroscience (Norman Doidge’s “The Brain that Changes Itself”), for fun.