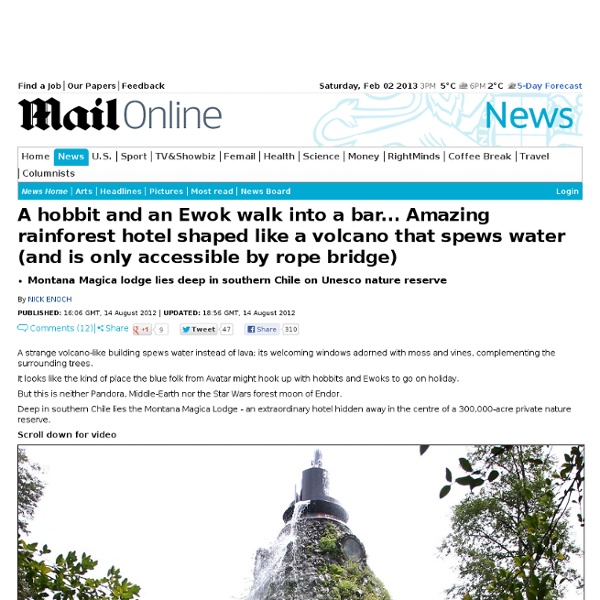 Montana Magica lodge lies deep in southern Chile on Unesco nature reserve By Nick Enoch Published: 16:06 GMT, 14 August 2012 | Updated: 18:56 GMT, 14 August 2012 A strange volcano-like building spews water instead of lava; its welcoming windows adorned with moss and vines, complementing the surrounding trees. It looks like the kind of place the blue folk from Avatar might hook up with hobbits and Ewoks to go on holiday. But this is neither Pandora, Middle-Earth nor the Star Wars forest moon of Endor. Deep in southern Chile lies the Montana Magica Lodge - an extraordinary hotel hidden away in the centre of a 300,000-acre private nature reserve. Scroll down for video It might be completely artificial but the Montana Magica lodge in Chile even 'erupts' every day, sending water running down the outside of the 13-room guest house Just the kind of place a hobbit might hang out... at a bar in the hotel, hidden away in the centre of a 300,000-acre private nature reserve at Huilo-Huilo in Los Rios

The Amazing Salt Flats of Bolivia By Rick Dewsbury Published: 10:36 GMT, 28 June 2012 | Updated: 10:47 GMT, 28 June 2012 A spot of reflection is always good for the soul. And judging by these pictures, there's plenty of room for that. For this is the world's largest natural mirror, created when a thin film of water gathers on a vast plain of salt deposits. So magnificent is the dream-like sight that the salt pans in the Salar de Uyuni in Bolivia have been dubbed 'heaven on earth'. Photographer Takaki Watanabe captured a series of pictures of spellbound travellers as they took in natural wonder and played around with their reflections. Mirror, mirror: A number of tourists enjoy the stunning sights of the salt flats in Salar de Uyuni, Bolivia, where the mineral deposits create the world's biggest natural mirror Takaki journeyed to the Potosm and Oruro departments in southwest Bolivia, near the crest of the Andes, where the magnificent sight can be found at an elevation of 11,995 feet above sea level.

The cheapest places to live in the world. $500 a month Are you tired of busy cities, crowded streets, high rents and almost non-affordable mortgage? Well...there are places in the world where you can live well for less. The cheapest places to live are also the most beautiful and exotic destinations. Have you ever been to Thailand? Chang Mai by Dj Badly Cooking at home will cost you nothing as fruits, vegetables and meat at the local markets fall into the budget category. Thinking about Cambodian history, the bloody regime of Pol Pot and poverty, no one would dare to call the country a paradise, but in terms of living cost Cambodia rivals Thailand. Getting around by tuk tuk. Living in Phnom Penh, the town of no McDonald’s and Starbucks, may be a life changing experience for you. Such beach on a daily basis? Another exotic destination where life will cost you not more than $500 (€350) a month is the Philippines. Ricefields in the Philippines. Surfing in Costa Rica might be an option...By Saaron83 Belize sunset by Gold44 P.S.

World's biggest pool holds 66 million gallons and cost £1billion to build The Crystal Lagoon at San Alfonso del Mar resort, Chile, is large enough for sailing and comes with its own fake beach By Lyle Brennan Published: 08:14 GMT, 21 May 2012 | Updated: 12:14 GMT, 21 May 2012 At the San Alfonso del Mar resort in Chile, a quick dip could well turn into a marathon. Swimming a length in this, the world's largest outdoor pool, would mean stroke after stroke for more than three fifths of a mile - that's 20 Olympic-size swimming pools. The enormous man-made lagoon is set halfway up the country's Pacific coast, in the city of Algarrobo, and is filled with 66 million gallons of crystal clear seawater. A little slice of the Pacific: The world's biggest pool is three fifths of a mile long and draws water from the ocean, cleaning it and allowing the sun to warm it to 26C It also hold the Guinness record for the world's deepest - so if you don't feel like diving 115ft to the bottom, it might be best to bring some spare goggles.

Day of the dead celebrations: Pictures from around the world By Rik Sharma Published: 10:39 GMT, 2 November 2012 | Updated: 13:32 GMT, 2 November 2012 Though at first glance these people seem to have taken Halloween a bit too far, they are in fact taking part in a yearly ritual in which they celebrate their dead relatives. The Day of the Dead is observed across Mexico and also in other places around the Western Hemisphere, including Haiti, Colombia, Guatemala, El Salvador and the United States. Even in Europe people pay homage to lost relatives in observances that began on Thursday on All Saints Day and continues on Friday with All Souls Day. Scroll down for video Dressed to the nines: Revellers in intricate traditional costumes take to the streets of Los Angeles, United States Hollywood: In what is also known as the Dia de los Muertos, the procession goes through the Hollywood Forever cemetery Party time: The revellers blow horns and make noise as they walk through the graveyard Resting place: A couple arrange a bouquet of flowers to place on a grave

Flashpacker HQ Scopolamine: Powerful drug growing in the forests of Colombia that ELIMINATES free will Scopolamine often blown into faces of victims or added to drinksWithin minutes, victims are like 'zombies' - coherent, but with no free willSome victims report emptying bank accounts to robbers or helping them pillage own houseDrug is made from borrachero tree, which is common in Colombia By Beth Stebner Published: 22:44 GMT, 12 May 2012 | Updated: 13:43 GMT, 13 May 2012 A hazardous drug that eliminates free will and can wipe the memory of its victims is currently being dealt on the streets of Colombia. The drug is called scopolamine, but is colloquially known as ‘The Devil’s Breath,' and is derived from a particular type of tree common to South America. Stories surrounding the drug are the stuff of urban legends, with some telling horror stories of how people were raped, forced to empty their bank accounts, and even coerced into giving up an organ. Scroll down for video Danger: 'The Devil's Breath' is such a powerful drug that it can remove the capacity for free will

Travel Recommendations, Travel Advice, Trip Planner | Wanderfly Hotel in Bolivia: Palacio de Sal is built entirely of salt and offers a treat for well-seasoned travellers Bolivia's Palacio de Sal built using 10,000 tonnes of salt and offers 'treat for the eyes', owner claimsResort features golf course, dry sauna, steam room and saltwater baths all made from salt bricksBut parts of the hotel have to be rebuilt every year because the rain washes them away By Steve Nolan Published: 11:45 GMT, 12 November 2012 | Updated: 13:55 GMT, 12 November 2012 Here is a hotel that really goes against the grain - because it is built entirely of salt. Complete with a bar, pool table and whirlpool, the stunning Palacio de Sal, in Bolivia, South America, it may look like a run of the mill hotel. Built at the edge of Salar de Uyuni - the world's largest salt plain, the luxury hotel and golf course features all the mod cons you'd expect, including a dry sauna, steam room, whirlpool and, unsurprisingly, its own saltwater baths. Scroll down for video The staggering 4,500 sq metre hotel, built at the edge of the Salar de Uyuni, is made entirely of salt - 10,000 tonnes of the stuff

Underground ant city in Brazil that 'rivals the Great Wall of China' with a labyrinth of highways By Julian Gavaghan Updated: 16:51 GMT, 2 February 2012 A sophisticated underground ant city once populated by millions of insects has been discovered by a team of scientists. The abandoned megalopolis, which features vast subterranean highways, paths and gardens, was found buried beneath the earth in Brazil. It is thought to have housed one of the biggest ant colonies in the world. But no one is sure when the leafcutter species left and what caused their demise. Scroll down to watch the amazing video Underground city: The network of tunnels and dens built by millions of Leaf Cutter ants in Brazil Experts poured ten tonnes of concrete into holes on the surface – which served as air conditioning ducts for the ants – to expose the tunnels by solidifying in the space. It took ten days to pour the material down the labyrinth of channels, which covered an area of 500sq ft and extended to 26ft below the surface.. Vast: The Leaf Cutters are said to form the second most complex society after our own

Mexico's Las Pozas park, surreal jungle gardens created by an eccentric Englishman By Sarah Gordon Published: 09:44 GMT, 1 April 2014 | Updated: 18:05 GMT, 1 April 2014 The Mexican jungle is certainly not the first place you would look for art. But one eccentric British millionaire decided the lush Sierra Madre hillside is the perfect setting for his selection of surreal sculptures. The late Edward James, a wealthy arts patron, created the unusual Las Pozas park 'as a joke to a future generation' and filled it with quirky sculptures that look almost unfinished. Scroll down for video Mystery: The gardens are buried deep in the jungle, with surreal sculptures emerging from the undergrowth along a network of different pathways Flight of fancy: British millionaire Edward James was an art patron and loved the idea of creating a surreal escape among the trees Spiral staircases lead nowhere and ornate concrete structures look like undiscovered ruins from a past civilisation. 'Mr. Video courtesy Postandfly see more video here James' imagination didn't stop with the flowers.