Immersive Cocoon // Step Into The Future 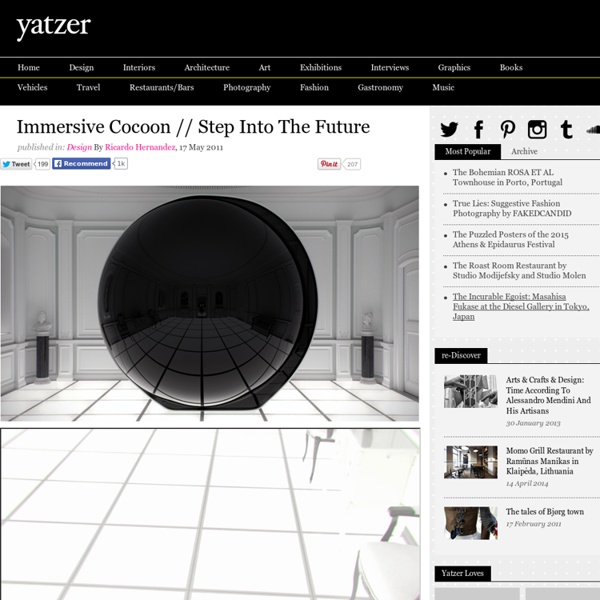 Directed & 3D CG by Oliver Zeller, Video Courtesy of I-Cocoon The world of interfaces continues to evolve and surprise us. We still think of it as something we can hold, fold and place in our bag to carry anywhere. What if you can be part of an intuitive and holistic experience where your interface is not reduced to a mouse-click or a two dimensional tablet screen. Welcome to the Immersive Cocoon, a surround display dome with sophisticated motion sensor technology that inspired the technology depicted in 'Minority Report'. Now your body becomes the interface, as you are enveloped and your body movement becomes part of this digital environment to make our everyday lives more enjoyable, at least that is what this conceptual project tries to explore. Image Courtesy of I-Cocoon The Immersive Cocoon opens its hatch silently and extends a small set of stairs that helps you move into this 360 degree display covering the entire interior walls. sources: I-Cocoon, NAU

10 Modern Devices That Will Change Our Lives Many believe that we are now experiencing the most intense technological revolution of all time, and that we are transitioning into a High Technology Age, where new advancements will make previous models extinct. Here are some gadgets that are slated to be released in the very near future (some have been released already). Many of these modern devices will change our lives—and the world we live in—for good: Fear of the dentist can be a very serious issue for many children and adolescents. The truth is that no one really enjoys going to the dentist regardless of their age, even if it’s just for a plain check-up. The sensor will alert you when it detects any bacteria that could cause cavities, plaque buildup, or any other infections—in this way you’ll be able to prevent a major problem, and thereby avoid the dentist’s office. Welcome to the future of fun and entertainment. It’s not recommended for people who are afraid of high rises, nor for those of us who have a propensity to vomit.

John Pugh: Will Ingestible Micro Computers Be The Doctors Of The Future? Imagine if on your next doctors visit, instead of going through all the examinations, your doctor simply handed you a pill and sent you on your way. They may look like normal pills, oblong and a little smaller than a daily vitamin, however they are in fact fully functional ingestible computers, which travel your system and transmit back data. It sounds like something straight out of science fiction, but is it really that far off? Proteus Digital Health of Redwood City, California, has created a ‘smart pill’ system that helps patients and caregivers monitor dosages. Inside these pills are tiny sensors and transmitters. After swallowing them, the devices make their way to the stomach and then through the intestinal tract. The pills themselves do not require a battery, as the body itself is the power source. The technology behind these pills could help patients monitor and treat a wide range of problems. Proteus Digital Health

The Spiral Pump: A High Lift, Slow Turning Pump Table of Contents History of this Document First distribution 1986. OCR scan and conversion to HTML by Chris Pirazzi, chris@pirazzi.net, 2005. Internet address of this document: There are other interesting documents about water-powered water pumps at: which readers of this document may also find interesting. History and Theory of the Spiral Pump In some instances, records of preindustrial technology can be a source of concepts which can be updated with modern materials and modified to be utilized in today's technology transfer efforts. Wirtz invented the spiral pump to provide water for a dye works just outside of Zurich. The Wirtz spiral pump was constructed so the end of the outside pipe coil opened into a scoop. Figure 1: Historic Wirtz Pump—1842 drawing Figure 2: Historic Wirtz Pump—1842 drawing Gregory also described spiral pumps formed as a huge clock-spring-like spiral sandwiched between two wood disks. Construction

Window Socket - Solar Energy Powered Socket by Kyuho Song & Boa Oh The Window Socket offers a neat way to harness solar energy and use it as a plug socket. So far we have seen solutions that act as a solar battery backup, but none as a direct plug-in. Simple in design, the plug just attaches to any window and does its job intuitively. Designers: Kyuho Song & Boa Oh

Concept Clothing Responds To Social Situations Goldsmiths, University of London graduate Lilian Hipolyte Mushi has designed concept clothing specifically for introverts to help them in a highly extroverted world. The project, which the designer has titled An Introvert’s Transformation to Extroversion, consists of specific components that ‘react’ when someone gets too close to the wearer. The piece of clothing includes wooden arms that fan out at the back when built-in distance sensors detect someone within 80 centimeters of the wearer. According to Lilian, the concept clothing ‘explores how introverts use isolation as a mechanism for social recharge as well as a way to navigate social situations.’ View more images of the project below. Lilian Hipolyte Mushi

FreedomPop Goes 3G With Sprint FreedomPop is expanding its low-cost coverage in a big way with Sprint's 3G network. FreedomPop, the company that is basically giving you online access for free, is expanding its coverage dramatically with the addition of 3G service via Sprint's nationwide network. The company is now accepting orders for its first 3G/4G hotspot, the FreedomPop Overdrive Pro. What is FreedomPop, exactly? "The biggest criticism with our service to date has been the coverage gaps in certain parts of the country," said Stephen Stokols, FreedomPop's CEO. The Overdrive Pro costs $39.99. "We're planning on launching our full national LTE rollout by the end of this year, but until then, adding nationwide 3G coverage gives users the ability to connect from anywhere," Stokols said. So aside from the hassle of returning and re-ordering devices, this is only a good thing, because it means more cheap Internet all around. We'll be getting our hands on an Overdrive Pro from FreedomPop shortly.

Star Wars-style robotic arm approved for mass production Published time: May 10, 2014 08:55 Edited time: May 12, 2014 22:00 Image from darpa.mil A “near-natural” prosthetic arm, that took eight years to develop and test, has been approved for mass production by the US Food and Drug Administration. The DEKA Arm System has been affectionately dubbed “The Luke,” after Star Wars’ Luke Skywalker who received a robotic replacement for the hand he lost in a fight with Darth Vader in the 1980 film “The Empire Strikes Back.” One of the developers, Dean Camen, the inventor of the Segway, says that the new type of a prosthetic limb will dramatically improve the lives of amputees. According to the recent Food and Drug Administration (FDA) release, it “reviewed clinical information relating to the device, including a 4-site Department of Veterans Affairs study in which 36 DEKA Arm System study participants provided data on how the arm performed in common household and self-care tasks."

The Future Of Education Is Outside The Classroom The world is currently facing monumental education challenges. Decades of standardized testing, fear of technology, and fixation on memorization have impacted the world’s youth negatively and kept them from reaching their human potential. In a recent documentary, the telecommunications provider Ericsson sheds light on shifts happening in the worlds of various educators and the learning industry at large. Seth Godin believes the education system is scam. Jose Ferreira, Founder and CEO of Knewton, believes the textbook of the future will be housed on devices. Sugata Mitra believes that knowledge and knowing are becoming replaced by access to information. Stephen Heppell is working to shift the focus in education from exams and scores to be more data-led and technology friendly. Lois Mbugna and Margaret Kositany are Ericsson employees working in Kenya. Ericsson

25 Simple Yet Awesome Gadgets and Accessories by vinayak mathur You know what they say, “less is more”, and these simple (yet awesome) gadgets are the perfect examples. 25. Mini Doughnut Factory 24. 23. 22. 21. 20. 19. 18. 17. 16. 15. 14. 13. 12. 11. 10. 9. 8. 7. 6. 5. 4. 3. 2. 1. Google reveals Project Tango experimental phone with built in 3D scanners Phone will only be sold to app developersCould be used for indoor navigation and augmented reality gamesTechnology similar to Microsoft's Kinect for game consoles By Mark Prigg Published: 20:33 GMT, 20 February 2014 | Updated: 17:59 GMT, 21 February 2014 Google has revealed a mobile phone with a built in 3D scanner that could revolutionise navigation. Called Project Tango, the phone can build up a live 3D map of its surrounding area. It will initially only be sold to developers, who Google hope will develop everything from satnav apps to games similar to those found on Microsoft's Xbox, which uses the 3D Kinect sensor.. Scroll down for video Google's prototype phone - a 5inch handset packed with 3D sensors The handset can automatically build a 3D map of anywhere the user is, allowing for far better indoor navigation The handset can take 250,000 3D measurements a second It was created by Motorola's ATAP division, which last week joined Google. A live map created by the handset

Mycestro 3D Mouse Ring Controlling objects through abracadabra gestures seems to be a hot trend right now. So can someone please make me a Mycestro 3D Mouse ring or MYO Armband that, in addition to manipulating my PC, will also abracadabra my dog's shit from the ground to the bag while I go all Houdini on it from a safe distance away? Nick Mastandrea, Mycestro godfather, how about it? Mastandrea conceived his idea for a mouse worn on the index finger while flying with a passenger who struggled to cram his laptop on the tray table and use its traditional mouse in the limited space. Mycestro tracks hand motion in 3D space. Mycestro's range reaches up to 30 feet. Other Mycestro mouse characteristics of note: The ring is about the size of a wireless earpiece.It weighs next to nothing.