This is the world of fashion 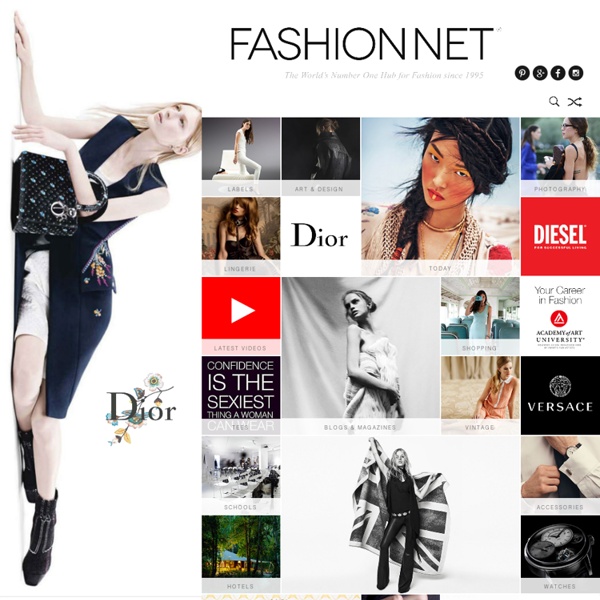 FolkCostume&Embroidery: Costume of Montehermoso, Cáceres Province, Extremadura, Spain Hello all, Today I will return to Spain. I have found more materials, and am glad to offer more information on its rich culture. Fashion Wallpaper* newsletter Register for our bi-weekly bulletin of the stuff that refines you By submitting your details, you'll also receive emails from Time Inc. UK, publisher of Wallpaper* and other iconic brands about its goods and services, and those of its carefully selected third parties. Please tick here if you'd prefer not to hear about:

History Of Fashion - Medieval The Middle Ages are commonly dated from the 5th century fall of the western Roman Empire until the end of the 15th century. During the history of mankind, fashion was always a subject of controversy, and Medieval Fashion followed the rule. The Great Charlemagne did not like luxury in daily life. His household officers did not dare to show themselves in any clothes but those made of leather, wool or cloth. However he used to make the most magnificent display on the occasions of political or religious festivals, when the imperial dignity with which he was invested required pompous ceremonial and richness of attire. The Medieval Fashion hardly changed during the reign of the other Carolingian kings.

McCartney, Versace bank on 'fast fashion' in Brazil © AFP/File Patrick KovarikBritish fashion designer Stella McCartney acknowledges the crowd at her 2015 Spring/Summer fashion show in Paris on September 29, 2014 Sao Paulo (AFP) - Fashion stars Stella McCartney and Donatella Versace this week will launch collections with two department stores in Brazil -- a country with consumers hungry for top brands despite an economic downturn. The daughter of the Beatles legend is launching her second collection, this time just for Brazil, for international chain C&A. Versace, meanwhile, has designed an exclusive collection for Brazilian store Riachuelo, which has more than 220 stores -- and more than 20 million clients. Renaissance Fashion: The Birth of Power Dressing At what point did it begin to matter what you wore? Ulinka Rublack looks at why the Renaissance was a turning point in people’s attitudes to clothes and their appearance. A Lady with a Drawing of Lucretia, by Lorenzo Lotto, c. 1530-33.

Kathy Griffin Was Offered Fashion Police Hosting Job After Joan Rivers's Death By Emily Strohm @emablonde Fashion Police may have a new host – if Kathy Griffin decides to take the job. The comedian confirmed to PEOPLE that she received an offer to cohost E!'s hit show, which is set to return in January. "They did offer it to me," she said Monday at the Make Equality Reality gala hosted by Equality Now in Beverly Hills. Renaissance 1450-1650 Once again I shall make a glossary of clothing terms, this time from the Renaissance. Some of the terms I defined for Medieval clothing were also used during the Renaissance and I will most likely use some of those terms in current posts, so their definitions can be found here. basquine — boned bodice made of whalebone and leather, gave the appearance of wider shoulders tapering to a tiny waist (women) beret— thin, loose hats that usually tilted towards one side of the head Renaissance beret bombasting — stuffing for trunk hose, peascod-belly, and leg-of-mutton sleeves, composed of rags, flock, and other materials

25 Women Designers Who Changed Fashion Forever The upcoming Costume Institute exhibit and Monday's Met Ball honors two of fashion's most beloved women designers: Elsa Schiaparelli and Miuccia Prada. But what about the other female names that have helped to change fashion forever? Recently, Style.com's Nicole Phelps noted that in New York fashion today there is a surprising lack of big-name female designers, which begged the question: "Is it easier to succeed in New York fashion as a man?" Phelps certainly has a point: After all, in the CFDA/Vogue Fashion Fund's eight year history, the prize has only been awarded to women designers twice. The dearth of female designers in New York is particularly disheartening, when you consider the important role women have played in shaping fashion's past and present. From Coco Chanel, to Phoebe Philo, female designers have provided a fresh--and needed--perspective on fashion and in many cases, they changed the industry as we know it.

Cristóbal Balenciaga at Ornament Magazine - Jewelry, Fashion, Beads BALENCIAGA INFANTA EVENING DRESS, 1939. Photograph by George Hoyningen-Huene. © R.J. Horst. So you want to work in fashion? If you are someone who wants to work in the fashion industry, you'll know it. You'll read the magazines, you'll follow the blogs and your love of fashion will be part of who you are. But working out how to actually get there can be difficult. Do you go to uni or do you not?